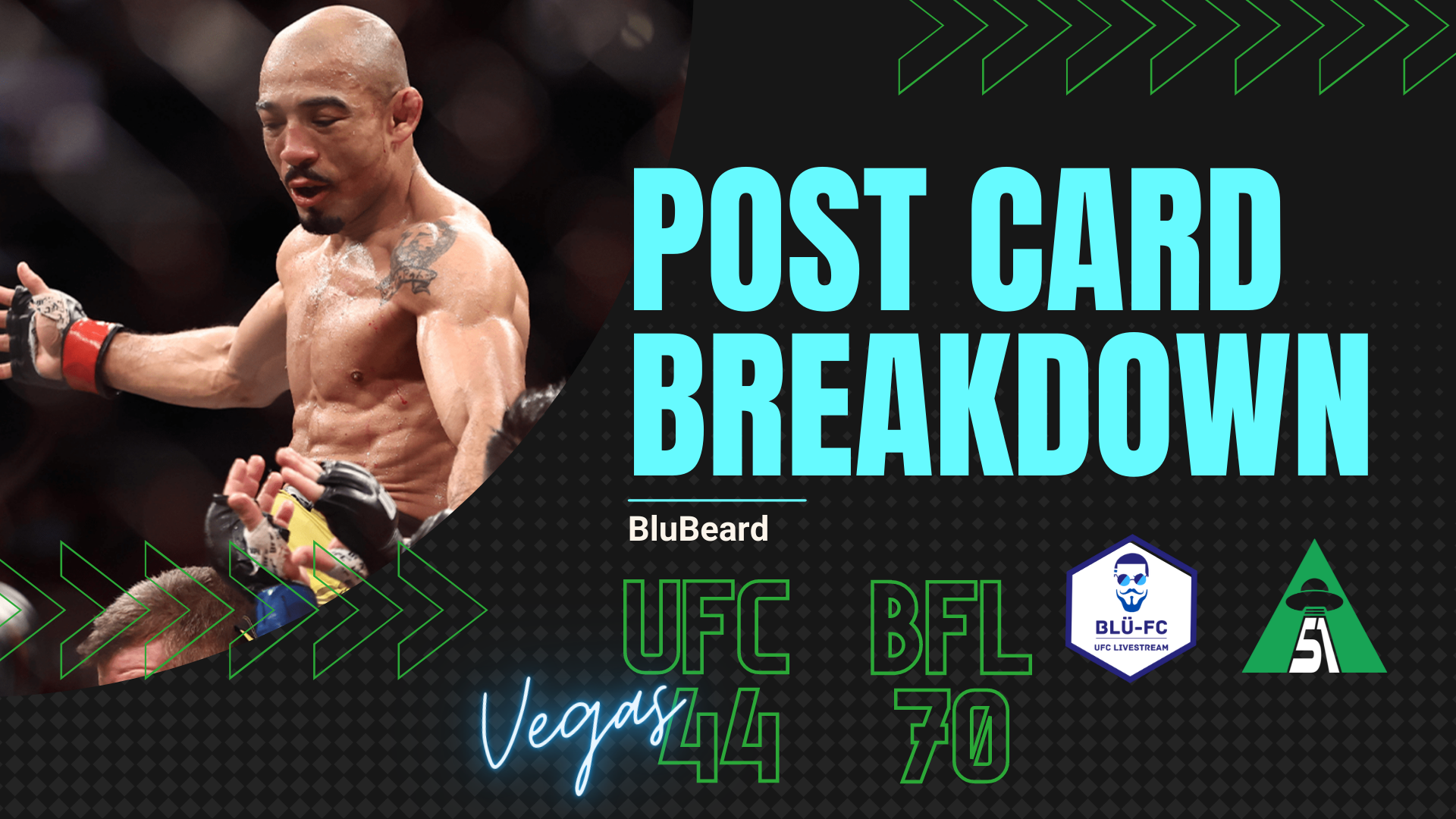 *This was originally posted on December 2, 2021

UFC Vegas 44 features two powerhouse bantamweights who are fighting to put themselves into the title picture. Rob Font is on a 4 fight win streak with a recent win over the legendary Cody Garbrandt while Aldo has been better than ever recently. In the co-main we’re going to see two rising lightweight contenders clash as Rafael Fiziev squares off against Brad Riddell. Some other fighters making their returns are UFC veteran Clay Guida, Jimmy Crute, Jamahal Hill and Alex Morono. All of these matchups (plus more) are covered below and features BLÜ’s predictions along with the Bet99 Sportsbook Odds.

This bout opens up the main card and has the potential to be one of the most exciting matchups of the night. Alex Morono just recently won an exciting decision over Zawada and got a 1st round TKO over ‘Cowboy’ Cerrone earlier this year. Mickey Gall has also had a couple of exciting fights recently with a 1st round submission over Jordan Williams earlier this year and a decision loss to Mike Perry in 2020.

Both fighters have a similar resume and have been around the UFC for a while now, but Morono seems to be improving at a much more impressive pace and has been more active recently. Since they’re so evenly matched and Gall doesn’t normally get finished, it seems likely that Morono will come out ahead in a decision victory here.

This bout features a ranked contender, Brendan Allen, and a rising contender that shocked viewers just a month ago with a 1st round TKO victory over Phil Hawes; a performance that earned him my MVF BLÜ Bonus for the month. Allen has won 5 of his 6 fights in the UFC with his only loss being to top contender Sean Strickland. On Curtis’ side, he had that impressive win over Hawes last month and a few wins just before that in other promotions, but had a spotty record outside of the UFC before that.

Curtis definitely has a chance to win this fight, especially after his win over Hawes, but the safe bet has to be Allen. Allen is almost 10 years younger and has a much more impressive resume inside the UFC. Curtis is one tough customer though, so I anticipate we’ll be seeing a decision, but an Allen finish is certainly plausible, especially with those ground skills.

Both of these men have a great record; Crute sits at 12-2 while Hill sits at 8-1. Both fighters are also coming off of losses to top contenders with Crute losing to Anthony Smith and Hill losing to Paul Craig. This is another bout that could really go either way; there’s a reason they’re ranked 13th and 14th in the division.

There’s two difference-makers here. First, Crute seems to have fought the more skilled fighters in his career; this is always important when you see two closely-ranked fighters. Next, Crute also seems to be a much more dangerous force on the ground. With that in mind, I’m leaning towards Crute. If he can take Hill down, I’m confident he can get a finish; if not, he’ll likely get the decision win with his control along the fence.

It’s always an entertaining matchup when the veteran Clay Guida is involved. He lost a paper-thin decision in his last bout to Madsen, but many (including myself) believe he won that fight. We don’t have enough time to go through everyone he’s fought before that, but with a record of 36-21 he’s pretty much fought everyone. As for Santos, even though he’s been in the UFC since 2013, he hasn’t faced anyone of real interest except for Kevin Lee.

Normally, we’d be seeing Guida as the older man, but in this case we see that Santos is on the other side of 40. That, combined with Guida’s immense experience and incredible performance against Madsen, has me leaning towards Guida. And because we’re seeing 2 veterans, I don’t think we’ll be seeing any finishes, but either of these men are capable of locking in some dangerous submissions.

If it weren’t for the main event, I’d say this one was lined up to be fight of the night. Both of these guys are exciting and dangerous contenders. Currently, Fiziev is ranked 14th while Riddell is up in 12th. Not only are they close in the rankings, they’re also close in age, close in reach and have the same record at 10-1. This is as close of a fight as you’ll ever see on paper.

No matter what happens, this is going to be a great fight and we’ll likely see a decision here. I’m going to lean towards Riddell because he trains at City Kickboxing with Izzy and Kara-France; that gym has been unbelievable this year.

Finally, we end the night with an incredible matchup between number 4 ranked contender Rob Font and the King of Rio, the legendary Jose Aldo. Font won a decision earlier this year against another veteran in Cody Garbrandt. Before that, he made his way into the rankings with wins over Marlon Moraes, Ricky Simon and Sergio Pettis. As for Aldo, he’s looked as sensational as ever with wins over Munhoz and Vera over the past year. Before that, of course, he lost the vacant bantamweight belt to Petr Yan late last year.

Both fighters have an even chance of winning this fight. Although both men are elite strikers, from what I’ve seen, Aldo is faster and utilizes his kicks more. Since this will clearly be an explosive standup brawl, those factors should give Aldo the edge to win the decision victory.

Both these fighters are on the verge of breaking into the flyweight rankings and are coming off of 1st round wins in their last trip to the octagon. Their record in the UFC is identical with two decision losses followed by a 1st round finish. Kape comes in slightly younger and with a slight reach advantage of 2 inches.

On paper this is dead-even. From what I’ve seen of both of these fighters, Zhalgas seems to be a more well-rounded fighter who’s more well-versed on the ground while Kape stays on his feet. I believe this will be an exciting fight and a close fight, but because of his skillset, I think Zhumagulov will take the win by a decision or with a late submission.

In the featured prelim of the night, we’re going to see two exciting middleweights square off. Although both of these men are promising young prospects, they’ve also both been on a losing streak recently. Sadly, this means that it’s likely that whoever loses this bout will be let go from the UFC.

There’s not much separating these two; their records are similar, they have an almost identical reach and are almost the same age. From the fights that I’ve seen, I’d say that Dusko is slightly more well-rounded, but this fight is a coin toss. I’ll lean towards Todorovic based on what I’ve seen. That being said, Pitolo has that Hawaiian toughness; I don’t think he’ll be getting finished.

Here I highlight some betting lines that you might want to take advantage of for UFC Vegas 44. These are odds that favour the bettor. Although some of them may conflict with my picks, they offer a fair reward for a slight bit of risk.

The Underdog Zhalgas Zhumagulov at +220

Their record is identical in the UFC and they’re almost identical physically; already, as a bettor, this should lead to some kind of action on the underdog. That aside, after watching both of these fighters a couple times already, Zhalgas seems to be the better grappler. In an even matchup, that extra edge should lead to more control time along the fence and on the ground. Although we may not see a finish, that extra control would edge Zhalgas ahead on the cards.

Zhalgas Zhumagulov by Submission at +1500

Zhumagulov is the more experienced grappler in this matchup. If he can get Kape to the ground, he stands a decent chance to get a submission. Although this bout is likely to end in a decision, it’s worth sprinkling a couple dollars on this one.

The Underdog Clay Guida at +160

Guida looked fantastic in his last bout; he was one scorecard away from beating an undefeated olympic wrestler. He’s also notoriously active with his schedule and his pace in the octagon. Not only that, because Santos is over 40, Guida, for the first time in a while, isn’t the older fighter. All of these things scream to me that Guida is going to win.

The Underdog Jose Aldo at +122

Calling Jose Aldo an underdog is almost blasphemous at this point, especially when he’s not facing a champion or someone who’s proven to be one of the most elite fighters on the roster. Aldo is faster and uses a wider variety of strikes. I don’t see Aldo getting a finish, but he can use that extra speed, skill and experience to win a decision.