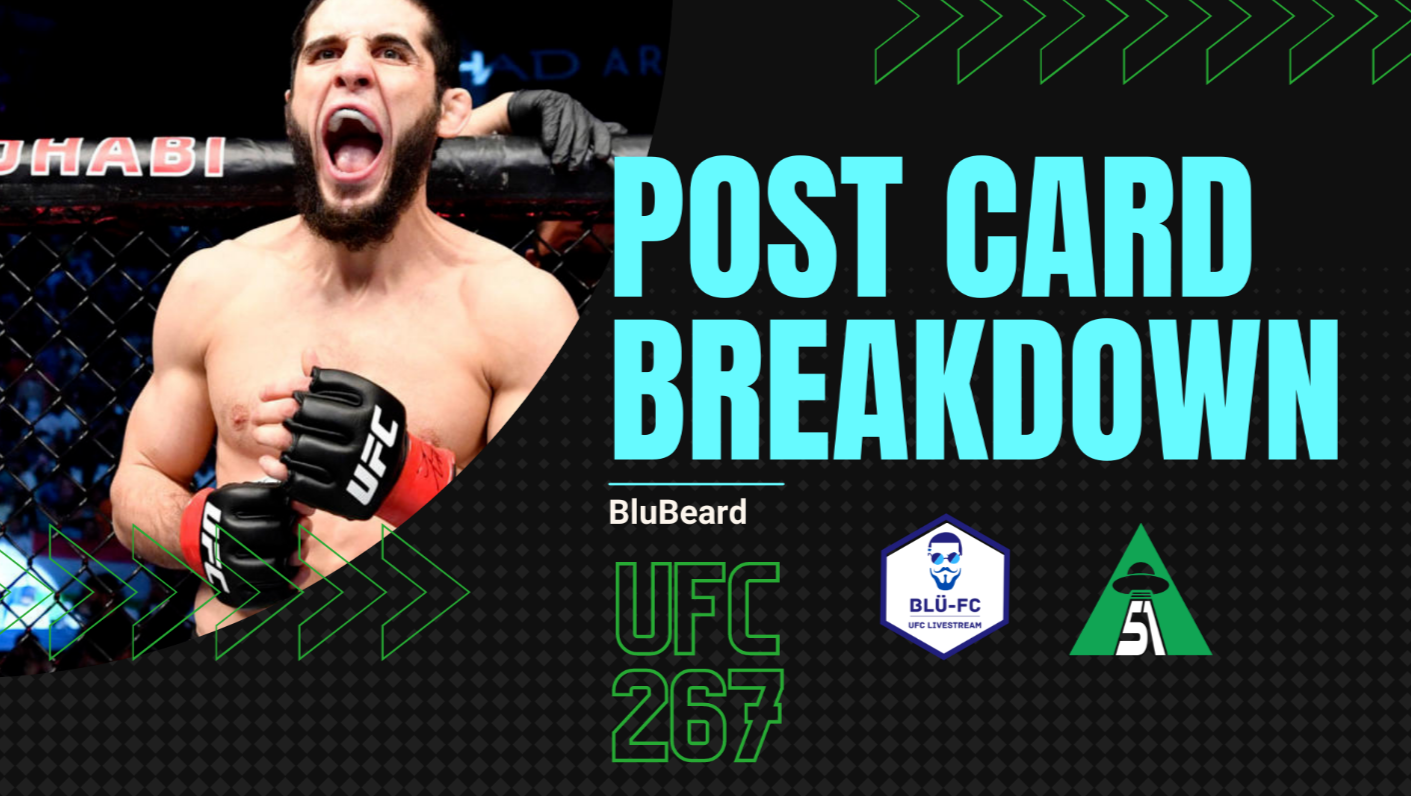 UFC Vegas 43 features two bantamweights who are fighting to put themselves into the title picture. The former champ, Miesha Tate, is coming into her 2nd bout of 2021 after taking a break from competition in 2016. While Tate was on that break, Vieira has flown up the rankings and finds herself sitting in 7th with an 11-2 record after her close loss to Kunitskaya in her last bout. The co-main is an exciting matchup between a top welterweight contender, Michael Chiesa, and the undefeated, rising contender Brady. Other exciting matchups include Adrian Yanez and Davey Grant, who are opening the main card, Terrance McKinney, who’s looking for his 5th win of 2021 against Ziam, and ‘Loopy’ Godinez making her 3rd appearance in the past 2 months against Loma Lookboonmee. All of these matchups (plus more) are covered below and features BLÜ’s predictions along with the Bet99 Sportsbook Odds.

Just like last week’s card, the main card this week opens up with a bantamweight bout that is sure to bring the action. Yanez only arrived in the UFC a little over a year ago and has already grabbed 3 impressive KO victories. The most recent victory was just a few months ago against another promising prospect, Randy Costa. Grant has been in the UFC a while longer than Yanez, but has a 50/50 record so far with 4 wins and 4 losses. His last bout was a loss this year to the ranked contender Chito Vera.

Although Grant has more experience and can certainly take the win, it seems as though Yanez is the safe bet here. Yanez is 8 years younger, has won and finished all of his UFC opponents, while Grant has lost a few already. An interesting note is that Grant has never been finished by punches; he’s only lost by submission or decision. Since Yanez has clear power, this could certainly change this fight, but I predict either a late finish or a decision win for Yanez.

Two flyweight contenders are set to square off in this one. Joanne Wood, formerly known as Joanne Calderwood (I know, what are the odds?) is currently ranked 6th while Santos is ranked 9th. Wood has gone about 50/50 recently with losses to Lauren Murphy, Maia and Chookagian and wins over Eye, Lee and Lipski. In comparison, Santos is much newer to the UFC and hasn’t fought the same calibre of opponent but has wins over Modafferi, Robertson and McCann, leaving her with an impressive career record of 18-1.

Although experience is always important, Santos has a lot of other factors leaning in her direction. She’s 7 years younger, has a bit of an edge in reach and if you look at pictures of both fighters…there’s a very clear edge in fitness in favour of Santos. All of those small edges, plus Wood’s back-and-forth record, I’m giving the edge to Santos here. Being that all of Santos’ wins in the UFC and a lot of Wood’s losses are by decision, it seems fair to believe this fight will go all 3 rounds.

This one is a dead-even matchup between two UFC veterans. Yahya has been in the UFC since it merged with the WEC in 2010 while Kang joined in 2013. Since then, both have had a few losses and a number of wins. The difference here is that Yahya was more active and fought much tougher competition during this period of time. They’re also very similar outside of their records. Both fighters prefer submissions over KOs and are close in age. The only difference that stands out is Kang’s edge in reach.

This matchup could truly go in either direction, but I’m leaning towards the experience and activity of Yahya. Kang hasn’t fought since 2019 and won his last two by split decisions. Meanwhile, Yahya has had 4 submission wins since 2017 with a draw and a unanimous decision win thrown in. Considering his record, it’s certainly plausible that Yahya gets another submission here, but let’s not forget that Kang also prefers submissions. Usually when you see that kind of matchup it leads to a standup fight and a likely decision.

Two ranked welterweights clash in the co-main, trying to make their way into a title contention spot. After his recent first-round loss to Luque, Chiesa is ranked in 6th. Sitting at a perfect 14-0 record right now, Brady is ranked 14th. This matchup could go either way. Chiesa has a strange career; he’s a credentialed submission artist…but he’s also been submitted early in his fights against Pettis, Luque, Lee and, most shockingly, Masvidal who is certainly not a wrestler by any means.

A couple points of difference are Brady’s age, being that he’s 5 years younger, and Chiesa’s 5 inch reach advantage. This is likely going to come down to who shows up hungrier and more prepared on the night. Given Brady’s spotless record, his submission skills and Chiesa’s questionable record, I’m giving Brady the edge here. There’s a good chance this fight will reach a decision, but for some reason, maybe it’s the fact that Chiesa was submitted so easily last time, I think Brady is getting a finish here.

Although this may seem like a strange choice for a main event to some people, this fight is intriguing and should be tightly contested. Vieira is coming into this bout ranked 7th, while Tate is ranked 8th. In terms of their record, it’s tough to compare the two. Tate clearly has the edge in experience with fights against, Rousey, Carmouche, Eye, Holm and Nunes, but all of these fights were in 2016 or earlier because of her lengthy layoff. Vieira started off her UFC career with 4 straight wins. Since then, she’s lost 2 of her last 3 to Aldana and Kunitskaya. There’s not much else separating these two other than the fact that Vieira is 5 years younger.

This one is a complete coin toss to me. A part of me thinks that Tate is back in the UFC and is gunning for the belt, but there’s a part of me thinking that maybe she’s done and doesn’t have what it takes to keep up with newcomers like Vieira. I can’t stress enough how close this fight is on paper, but I’m leaning towards Tate because of that experience and because Vieira has lost 2 of her last 3. Also, Tate is used to these 5 round fights, so I would give her an edge because of that as well.

If you’ve been on MMA Twitter recently, you’ll definitely recognize the name Terrance McKinney. He’s got 4 wins in 2021, his last was an unbelievable 7 second win in his UFC debut. On the other side, Ziam is no slouch; he’s got 2 wins in his 3 UFC fights to Vendramini and Mullarkey. I’ve put this on here because of the obvious storyline of McKinney who is possibly on his way to 5 wins in one year, but also because this is a tight matchup.

McKinney has not only won 4 fights this year, they’ve also all been 1st round KOs within the first 90 seconds of the fight. Because of that, the momentum is clearly in favour of Terrance and I’ll be leaning in that direction. That being said, a decision win over Vendramini and Mullarkey is somewhat impressive. I don’t think we’ll be seeing a fifth 1st round finish of 2021, but with that clear power, we could definitely see a finish at some point in this fight.

I’ve brought this one up because this will be the 3rd time I’m talking about ‘Loopy’ Godinez since I started BLÜ-FC this summer; she’s also Canadian AND this is looking like an interesting matchup. Loma was a promising prospect when she was brought into the UFC in 2019 which is why she was thrown at Angela Hill in just her second fight here. She lost that one but bounced back with 2 decision wins. As for Godinez, as I mentioned, we’ve already seen her twice in the past couple months. She won her first with an impressive 1st round armbar, but lost her second won in a decision. Although it should be noted she lost that decision up a weight class.

They have an identical record at 6-2, are similar in age and have similar reach. The separating factor for me are those last two fights for Godinez. That submission win was amazing and she even looked good against Carolina in the heavier division that she’s not used to; that’s something that I don’t think Loma could do. Loma is primarily a kickboxer while ‘Loopy’ is very well-rounded. We’re likely to see a decision win here because it’s the strawweight division and they tend to have a lot of decisions, but I wouldn’t be shocked if ‘Loopy’ can use her grappling and get another submission win.

I’m featuring this bout because we’re seeing the first UFC appearance by an undefeated Contender Series alum., Natan Levy. Although undefeated, he’s only 6-0 and hasn’t fought this year. As for Garcia, he’s lost his last 2 bouts, both of which were this year. While he’s lost his only 2 fights in the UFC, his losses were to Gruetzemacher and Haqparast; two tough matchups.

This fight is a complete tossup; you’ve got Garcia with a questionable record and Levy who hasn’t fought in the UFC yet. From a betting perspective, it makes sense to go with the man who’s undefeated and has the extra reach: Natan Levy.

Here I highlight some betting lines that you might want to take advantage of for UFC Vegas 42. These are odds that favour the better. Although some of them may conflict with my picks, they offer a fair reward for a slight bit of risk.

Godinez just recently got a submission win less than two months ago, she’s fighting a kickboxing specialist and she competed in a heavier weight-class last bout. If she can get Loma down, there’s a good chance we’ll see a finish.

With Chiesa’s questionable record and Brady’s spotless record, plus Brady’s obvious power and submission skills, it seems fair to believe that this fight will end before the final bell.