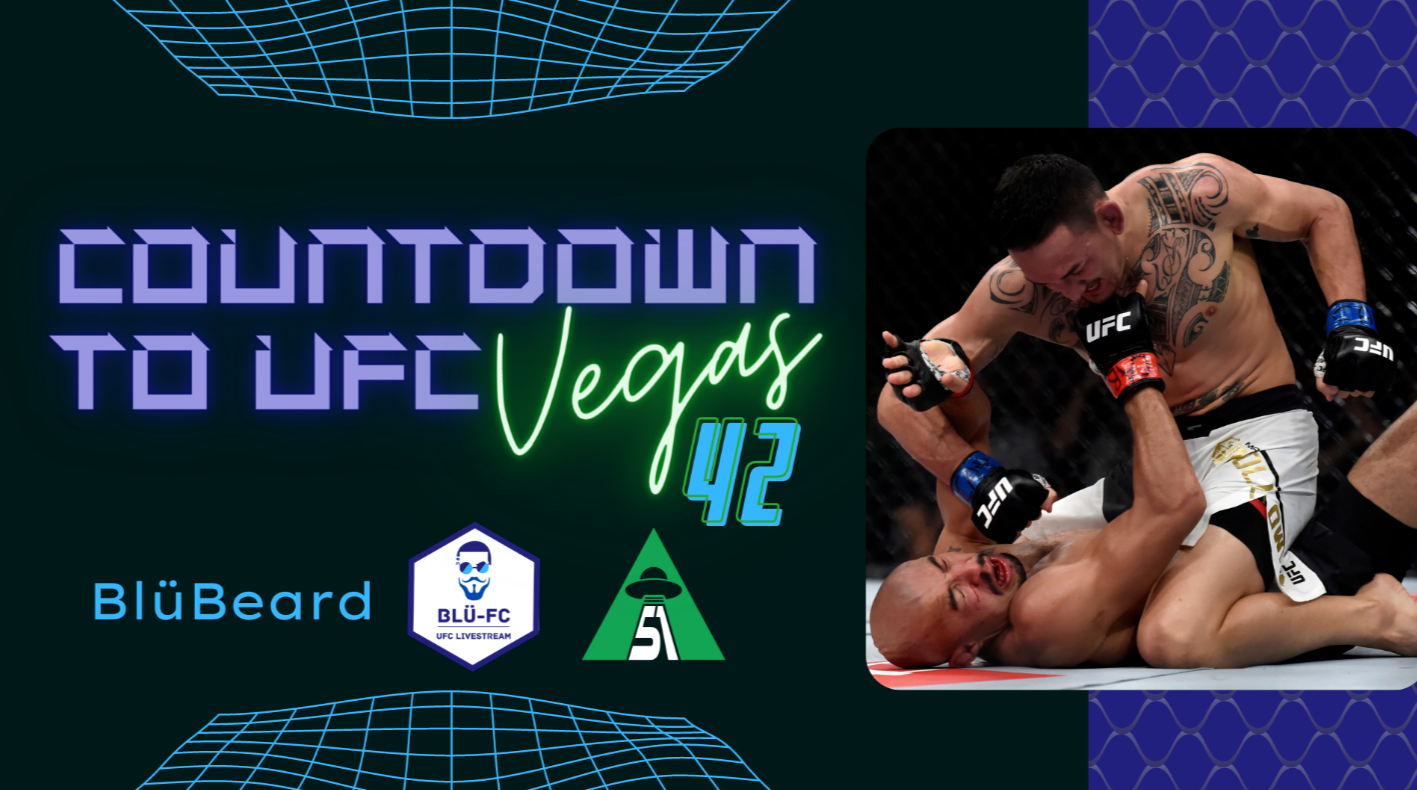 After two massive PPV events, the UFC returns to the APEX centre for UFC Vegas 42. We may be back to the smaller venue, but this card is full of BIG talent. The card is headlined by one of the greatest featherweights of all time, Max Holloway, and a talented contender in Yair Rodriguez. In the co-main we’re going to see another UFC veteran, Ben Rothwell, face off against Marcos Rogerio de Lima. The rest of the card is packed with talented fighters such as Felicia Spencer, Kyle Daukaus, Song Yadong and Cynthia Calvillo. Below, I’ll be giving my predictions for all those fights along with the BET99 Sportsbook odds at the time this article was posted.

The main card opens up with a bantamweight bout that is sure to bring the action. We just saw Song a few months ago get a tight, split decision win over Casey Kenney. That one could’ve gone either way, nonetheless, he still looked great and earned himself a spot at number 15 in the rankings. That was just the latest in a string of impressive performances with a win over ‘Chito’ Vera and only one loss in his UFC career. On the other side, Arce is 2-2 in his last 4 fights, his last one being a win against Andre Ewell.

Song clearly has a lot more factors leaning in his favour. He’s 9 years younger than Arce and, despite that age gap, he’s competed (and won) against the stronger competition. Normally this may indicate a likely finish, but Arce has only lost in the UFC in decisions, plus, most of Song’s fights in the UFC end in decisions. Combining all that, it seems likely that Song will win by a decision here.

Originally, this spot was taken for a bout between Roman Dolidze and Kyle Daukaus (and Kevin Holland before that), but due to COVID protocols, that fight was scrapped and this one takes its spot. This matchup was so intriguing that I had already talked about it on BLU-FC. So, don’t worry folks, we’re still lined up to have a great main card!

In this freshly-minted main card bout we’ve got 2 promising, young fighters on the edge of making the rankings. Baeza has had an almost flawless career so far with only 1 loss; that loss was to ranked contender Ponzinibbio last time out. Khaos also only has one loss in the UFC and that’s to the always-entertaining Michel Pereira. Not much separates these two; they have a similar reach, are close in age and fight in a similar style.

This one should be closely fought and should definitely be one to watch. I think because of all their similarities, we’re likely going to see a decision here. I’ve seen both of these fighters before a couple times and, based on what I’ve noticed, I find Baeza to be more well-rounded and dangerous. Based on that, I’ll lean towards Baeza, but this could go either way.

Finally we have another rare bout in the women’s featherweight division. This one is a complete toss-up. Spencer is coming in after losing 3 of her first 5 bouts in the UFC, but you have to consider that those 3 losses are to Amanda Nunes, Cyborg and Norma Dumont. Other than that, her MMA career is fairly impressive. In the other corner is Leah Letson who was a competitor on The Ultimate Fighter in 2018. The problem for Letson is…she hasn’t fought since then.

Because of Spencer’s losses and Letson’s inactivity, this fight could truly go in either direction. Because of her recent activity, especially since it was to the top competitors in the division, the safe bet here is Spencer. There’s a good chance that we’ll be seeing this bout go to a decision, but I think there may be a chance that Letson won’t be used to being hit as hard as Felicia hits. Because of that, I’m thinking we may see Spencer get a finish here.

In the co-main event we’re going to see UFC veteran Rothwell return for the second time this year. His record’s been a little spotty over the past few years, winning half of his fights since his return in 2019. But that’s not to say he hasn’t looked good. Those 3 wins were to contenders like Stefan Struve, St. Preux and the newcomer Barnett (whom we saw get a BLÜ BONUS last week). de Lima has also won around half of his fights since his addition to the UFC in 2014.

Rothwell is the clear favourite for this fight based on experience and strength of competition alone. Another interesting fact is that all of de Lima’s losses in the UFC have come by submission. And guess who has a pile of submission wins…Ben Rothwell! I’m running with this and saying that we may see another Rothwell submission here.

I mean…does Holloway even need an intro here? He’s one of the best strikers in the UFC, he took Volkanovski to a decision twice in a row for the belt and has more than a few striking records in the UFC. Of course, Rodriguez is no slouch; he only has one loss in the UFC (to Frankie Edgar) and has a highlight reel win over the Korean Zombie and wins over BJ Penn, Jeremy Stephens and Dan Hooker.

I don’t want to take anything away from the experience of Rodriguez, but when we’re talking about someone as talented as Holloway, there’s just no comparison. Holloway is the very clear favourite for this fight. The question is, can Rodriguez last all 5 rounds against Holloway? Max hasn’t had a finish since Ortega in 2018, but he’s also only been fighting elite strikers since then. I think Rodriguez will show that classic Mexican toughness and last until the championship rounds, but I think we may finally see another Max finish here.

We’ve got a great looking matchup on the women’s side right here. Calvillo is ranked 5th right now while Lee is ranked 12th. In her illustrious career in the UFC, Calvillo has fought the likes of Esparza, Chookagian, Andrade and Rodriguez. Sadly, she didn’t beat any of them, but she did bring all of them (except Andrade) to a decision. As for Lee, she’s certainly a much newer, less experienced addition to the roster. Lee just recently became a ranked contender after beating Antonina Shevchenko earlier this year. The interesting piece here though is that before that bout she had lost 3 in a row to Modafferi, Murphy and Calderwood.

The odds are suggesting that this fight will be close and that’s not completely unwarranted, but based on their recent fights, it seems clear that Calvillo should be the favourite. It should be noted that Lee has a 5 inch reach advantage, but considering the wealth of experience from Calvillo, I’m sure she’ll know how to overcome that obstacle. Although I’m definitely leaning towards Calvillo, I don’t think we’re seeing a finish here. Both of these fighters have an overwhelming number of decisions on their records, I think we’ll be seeing another one here tonight.

The featured prelim of the night features ranked contender Thiago Moises and an impressive prospect in Joel Alvarez. Moises has a back-and-forth record in the UFC with 4 wins and 3 losses, his last bout being a loss to the rising star of the lightweights: Islam Makhachev. On the other hand, Alvarez lost his first fight in the UFC and has won 3 after that, all of which ended within the first 2 rounds. An interesting point of separation between these two men is their reach; Alvarez has a HUGE 6 inch reach advantage.

On paper, Moises seems to be an easy choice as a favourite. For some reason, this is a coin toss to me; I keep flipping between both of them. Moises has had much tougher competition lately, but Alvarez has been on a tear AND he’s got such a huge reach advantage. Either way this goes, I think we’re seeing a great, full 3 round fight. I’m leaning towards Moises, but, as a bettor, you might wanna throw a few dollars at Alvarez because this fight is closer than it appears.

Here I highlight some betting lines that you might want to take advantage of for UFC Vegas 42. These are odds that favour the better. Although some of them may conflict with my picks, they offer a fair reward for a slight bit of risk.

Although Spencer has been on a losing skid, Letson hasn’t fought in 3 years. With that much time out of the cage it’s unclear whether she’ll be able to take the same punches she could before. Plus, Spencer has well-known power; it may be worth throwing a few dollars at the under 2.5.

Ben Rothwell by Submission at +450

This may seem like quite a stretch, but as I mentioned on BLU-FC and in the analysis above, de Lima has already lost a few of his fights by submission. This, combined with the fact that Rothwell has a number of submission wins, tells me that there’s a good chance we’ll see another here.

There’s no doubt that Holloway is winning this fight. Of course it will be featured in the parlays, but the real money is in the finish. We’ve seen lots of Holloway decisions recently…but they’ve all been to the absolute elite of the division. I don’t think we’re seeing an early finish, but if Max picks Yair apart like he did to Ortega and Kattar, I think we’ll be seeing Yair get finished late in the 4th or 5th round. It seems ludicrous that the odds of a Max finish are this high when he’s a -750 favourite.