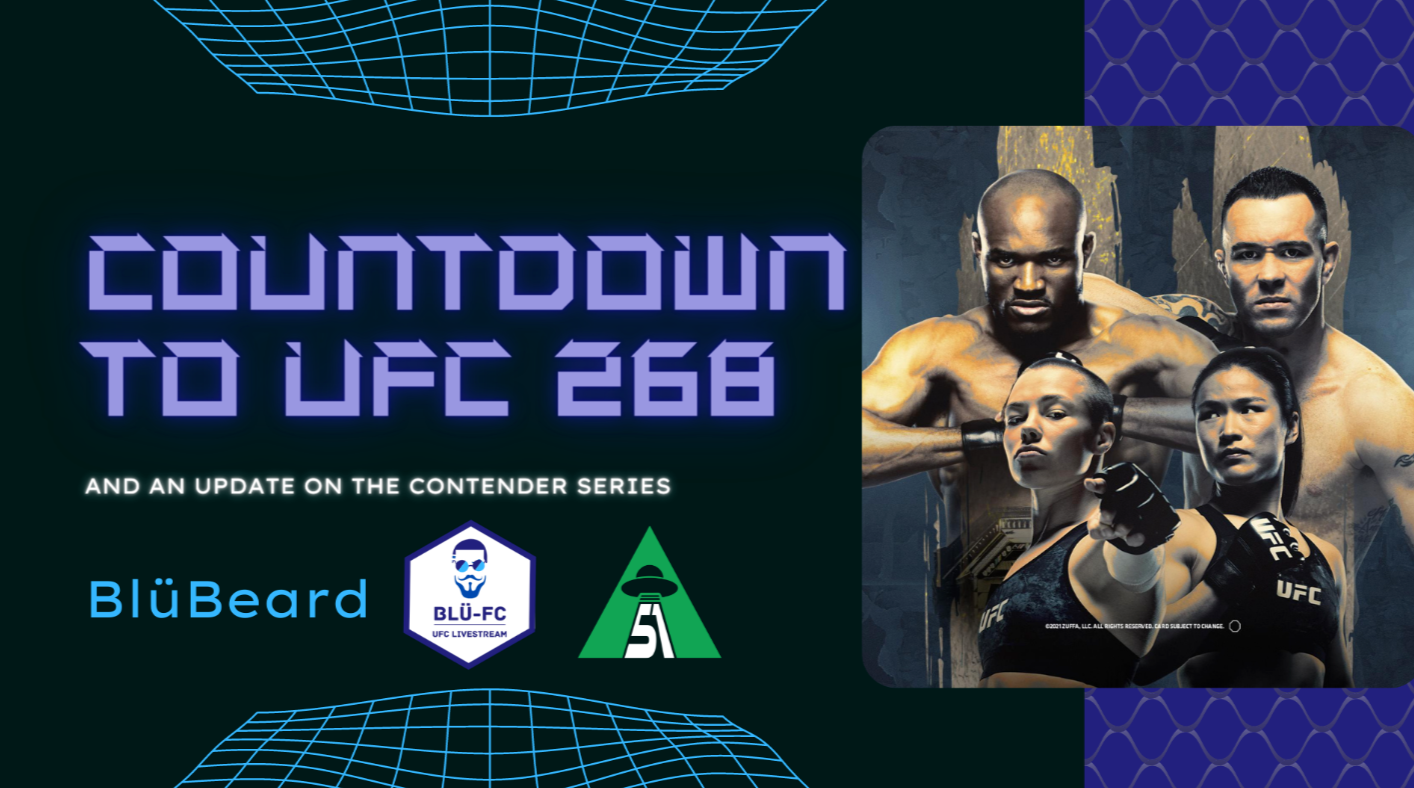 UFC 268 is the second of two HUGE PPV cards in a row. This one has another two belts on the line in two high-stakes rematches plus a massive clash in the lightweight division between two top contenders. Also on the schedule is a main card full of top prospects and plenty of prelims to watch. Below, I’ll be giving my predictions for all those fights along with the BET99 Sportsbook odds at the time this article was posted. In addition to previewing the UFC 268 action, I’ll also be sharing some thoughts about Week 10 of Dana White’s Contender Series.

In the first bout of the main card we’ve got another fight for UFC legend, Frankie Edgar. In this one he’ll be facing off against the young contender, ‘Chito’ Vera. Currently, Edgar is ranked 8th and Vera is ranked 13th. For a long time, Edgar fought the featherweight elite; he’s got recent losses against the Korean Zombie, Holloway, Ortega and Aldo. But now he’s moved down to bantamweight and is looking like the top contender that he is with only the one loss, that, of course, being a devastating highlight reel KO loss to Cory Sandhagen earlier this year. Vera has a slightly better record as of late but nothing special. He beat Davey Grant by decision which is nothing crazy and he “beat” the Suga Show, Sean O’Malley, but it was the flukiest win I’ve ever witnessed in my life with Sean taking a misstep and injuring his own ankle.

While Vera has some obvious edges, such as his age and possibly a couple inches of extra reach, the experience of Frankie Edgar looms large. This should be a tightly contested bout and I believe we’re in store for an exciting brawl that could land itself a BLÜ BONUS. I think this one will last all 3 rounds and Edgar will take the win with his extra experience.

Just like the first bout of the main card, this one’s set up to be an entertaining matchup. Burgos has looked strong in the UFC so far with only 3 losses, all to top contenders in Kattar, Emmett and, most recently, Barboza. Keep in mind that he lost by decision to Emmett and he was competing with Barboza until the third round. Quarantillo has only lost once in the UFC and that was late last year to Gavin Tucker. Otherwise, he’s looked pretty strong, but he’s also never fought a top contender.

This is yet another situation where I believe experience will reign supreme. I think it will be closely fought and will last the distance, but I think Burgos will edge out that decision.

This is the first of the 3 highly anticipated main fights of the night, this one with huge implications in the lightweight division. Both fighters are coming off title shot losses; Gaethje losing to Khabib, Chandler to Oliveira. You could argue that Gaethje has fought the tougher opponents throughout his career, but, in this case, considering Chandler beat Hooker and won the first round against Oliveira, their records don’t seem all that relevant.

This one is a toss of a coin to me. Both fighters have a similar reach, both fighters carry a lot of power on the feet and have a great game on the ground. This one will come down to whoever shows up and performs better on the night. Being that this is a 3 rounder, I think this one had a good chance of going the distance. Because of that, I’m leaning towards Chandler because I believe his style of fighting favours a decision. But nothing is out of the question for this fight; all I know for sure is… you won’t wanna miss it!

Admittedly, I’m still surprised Weili got a rematch here considering she was KO’d in a little over a minute, especially since the division is packed with talent, but we’ll move past that. As I’m sure you already likely know, Rose took the belt from Weili earlier this year by KO early in the first round. Already, that should push everyone in the direction of betting Rose. That being said, I’m sure this one will last longer. How much longer though? I’m not sure, but I’m still thinking that we’re going to see a finish here. Considering Rose’s power, her slight edge in reach and the fact that she won the last one so decisively, I’m expecting another finish by Thug Rose. It’s also important to keep in mind that the last fight only happened 6 months ago, there’s not much room for vast improvements in that short of time.

This is another title fight that I feel is undeserved. Colby’s last win was a year ago against Woodley who, although I hate to admit it, hasn’t necessarily had the best fighting career since then. In the meantime, Usman has absolutely dismantled top contender Gilbert Burns and given Masvidal his first KO loss in the UFC. I’ve seen all of Usman’s recent fights and his improvement has been remarkable. For Colby, we just haven’t seen that because he hasn’t fought.

I think Usman is special; there’s a reason he’s 1st on the Pound for Pound list. He’s dominating fights so much that he’s actually making it look easy. I just can’t see Colby winning this fight. I think this will be a tough fight for Usman and I think it’ll be bloody, but Usman will still be the champ and there’s a pretty good chance he gets a finish here.

This bout features ranked middleweight contender Shahbazyan (ranked 11th) and rising contender Imavov. Any fight that includes ranked fighters should be discussed. Edmen has had a rough time recently with two losses in a row against Brunson and Hermansson. But let’s not forget, those are two of the top contenders in the division, plus, Edmen was undefeated before his Brunson fight. Imavov is considerably less experienced in the UFC with 2 wins in 3 fights. That being said, his last fight was a TKO win over Ian Heinisch just a couple months ago.

Physically, these men are very similar; close in age and reach. Interestingly, the odds seem to favour Imavov. Perhaps this is due to the fact he’s from Dagestan. To me, this is not enough to override Edmen’s experience and strength of opponent. In a 3 round fight, I believe it will be closely fought and Edmen will use his experience to grab a decision win.

Hawes took this fight after his bout with Deron Winn a few weeks ago fell through. I’m featuring this bout because Phil Hawes is never one to miss. Also, this seems to be a somewhat mismatched fight. Phil Hawes has yet to lose in the UFC with wins over Imavov, whom we just spoke of, and Kyle Daukaus who just fought Kevin Holland. This isn’t to say Curtis is completely inexperienced. He’s got a 25-8 record with wins in multiple promotions and a win on Contender Series a couple years ago.

Because of the vast differences in the quality of competition, Hawes, of course, with the much stronger competition, Hawes makes a clear betting favourite here. In fact, because of his well-established power, he is likely to get a finish as well.

After 2 years of waiting, we finally get to see the return of UFC legend, Al Iaquinta. Although his record has been spotty his last few fights with only 1 win in 4 bouts, all 3 of those losses were to top contenders (Khabib, Cerrone and Hooker). has a slightly better record recently and has been much more active lately but has never fought the same level of competition that Al has.

This, the featured prelim of the night, is a very interesting bout. On the one side, you’ve got a fairly new UFC fighter, Michailidis who’s got 1 win and 1 loss in the UFC. But on the other side, is Glory Kickboxing champion Alex Pereira. Although he has minimal MMA experience (3-1), his kickboxing record is impressive. The most noteworthy fact is that he’s the only man who’s ever beaten Israel Adesanya twice AND the only man to finish Adesanya. Of course, let’s keep in mind that this wasn’t in MMA, but it’s still an impressive feat nonetheless.

I think this is one of those cases where the UFC is giving a potential new star (Pereira) an easier fight. Although I’m sure Michailidis is more well-rounded than Pereira, I believe Pereira will use his immense kickboxing experience to finish Michailidis early in the fight. Regardless of what happens here, this is a fight you’ll want to see.

Here I highlight some betting lines that you might want to take advantage of for UFC 268. These are odds that favour the better. Although some of them may conflict with my picks, they offer a fair reward for a slight bit of risk.

Considering Michael Chandler has been more active recently and he was winning the first round of his title fight against Oliveira, it seems criminal that he’s a betting underdog at +171. I already have him winning, but, with these odds, you’ve gotta throw a bit of money this way. Also, both of these men are very tough, I think taking the over 1.5 rounds in this case is a steal.

These odds are shocking to me. Just 6 months ago we saw Rose get a first round KO against Weili, so how does it make sense that she’s now a betting favourite and the fight is favoured to end in a decision. Both of these are prime betting lines to jump on.

The underdog Al Iaquinta at +150

Bettors are probably looking at this and see that Iaquinta has had a long layoff and a few losses, but let’s not forget that those losses are to top tier fighters and Green just doesn’t have that experience. Although a bit more risky than my other underdog picks, you can’t count out Iaquinta.

This week we saw Dana White hand out 2 contracts after 5 bouts.

This fight was fireworks right from the start with a wild exchange on the ground. Right after that, they got up, traded blows on the feet where Lainesse landed an absolute bomb and got a huge first round TKO. Easy choice for a UFC contract.

Another exciting fight right from the start as Estremadura swarmed Maheshate. Estremadura landed an early knockdown but Maheshate landed some clean shots of his own. Overall, it was a tight fight but Maheshate used his endurance and his technical skills to edge a decision victory. Both of these fighters looked impressive though, I’m sure we’ll see Estremadura again.

A tight flyweight battle between two fighters with long win-streaks opened the card on Tuesday. Both fighters displayed their grappling talents on the ground but neither fighter did anything exceptional. I don’t think either of these fighters is ready for UFC just yet. In the end, Puerta won by split decision.

Jonas Bilharinho
This entire bout was dead even with both fighters having moments on the fight. The first two rounds of the bout were fairly slow, but at the very end of the fight we saw Bilharinho deliver a highlight reel spinning wheel kick KO. I thought Dana might’ve handed out that contract just because of the spectacular KO, but he made the sensible decision to let Bilharinho go.

Erisson de Silva
The fight started off all Qiu with a huge knockdown, but de Silva quickly woke up and even got his own knockdown at the end of the first round. The entire fight ended up being a back and forth brawl with both fighters having multiple moments. Both of these men could easily have a future in the UFC, but tonight the judges gave it to de Silva. I’ll be honest, I thought Qiu edged the decision (the commentators agreed with me), but like I said, both men showed great potential. But, in the end, because Dana also thought that Qiu won the fight, he decided to pass on de Silva.