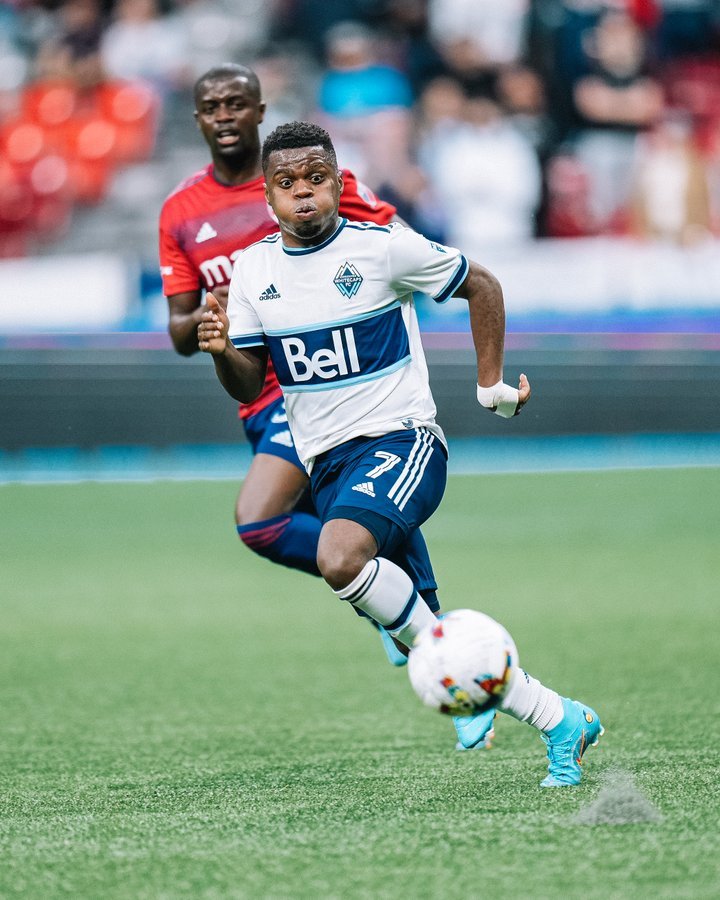 After a thrilling draw Saturday at BC Place, the Vancouver Whitecaps close out their May homestand with FC Dallas. It was going to be a tough test as FC Dallas was second in the Western Conference heading into the match.

So it was going to be a tough test.

Ranko Vesilinovic was back as the middle centre-back while Javain Brown took the right and Jake Nerwinski took the left. Sartini has spoken about trying to be better on transitions and having Vesilinovic back in the lineup helps. But was going back to the back three going to work? We shall see.

The Whitecaps had an all-Canadian midfield. It is nice for Cristian Gutiérrez to get a start but interesting to see Michael Baldisimo over Leonard Owusu. Ryan Raposo’s form has been good in the last few matches so it’s no surprise he gets a start.

Lucas Cavallini is coming off a solid game against San Jose and it is also no surprise he got a start. The Whitecaps got the two Colombians, Deiber Caicedo and Cristian Dájome as the attacking midfielders.

I wouldn’t have gone with the back three and the backline is concerning but I’m not the coach. The backline was a cause for concern but Sartini was willing to change things up in the hope the Whitecaps get three points.

For the first twenty minutes or so, the Whitecaps did well with the pressure.

They were moving the ball well and were looking for that right opportunity. Caicedo and Dájome were the ones generating the attack into high gear. They displayed some good pace and made good short passes but the crosses couldn’t find anyone. The Colombians needed support especially when on the transitions.

Cavallini was roaming all over the place. Ideally, he should play upfront and stay since he is the lone striker. But he made good crosses and a few solid runs when on the sides. When Cavallini had the ball he kind of looked isolated.

After the first 20 minutes, the Whitecaps kind of slowed down. Dallas dominated the possession but they were making a lot of mistakes. Their long passes would often go out of boards or be intercepted.

For both teams, it was a game of bad first touches. It felt like I was watching myself out there with the way the players were handling the ball. Was the ball filled with extra air? I hope not!

Cody Cropper made a good save on Jaden Obrian on a Dallas cross. Vesilinovic also bailed out Russel Teibert twice after back passes that ended up being intercepted.

There was a bit of a scare when Dallas Captain Matt Hedges got hurt in a collision with Cropper on a corner. He was down for a few minutes but was fine to continue playing.

Not a lot was happening. That was until stoppage time when Dallas showed off their signature counterattack as Vesilinovic, Nerwinski and Brown got caught and Paul Arriola beat Cropper. He then did the Kylian Mbappe arms crossed celebration in front of the Southsiders. Arriola was just left alone in front of a sleepy Whitecaps backline.

The Whitecaps were again lacking in the final third and the defending looked asleep on Arriola’s goal.

The Whitecaps started to bring the intensity in the second half.

It started with some quick passes and Raposo’s long shot just sailed over the bar. There was later some quick passing in which Cavallini almost got on the end of Raposo’s pass as he was running.

The Whitecaps were doing a good job with the possession in the second half. They looked fluid and were getting lots of crosses. However, no one was getting a touch on them. The Whitecaps are among the league leaders in crosses but in terms of crosses completed, are probably near the bottom or close to the middle.

Cropper didn’t have a busy second half but he did get his fingers on a long shot early in the half.

It looked like I reversed jinxed the Whitecaps when I said they weren’t getting heads on their crosses. After I Tweeted that, Gutierrez made a good down the left and crossed the ball to Brian White, who came off the bench and made no mistake.

White has struggled with injuries and finding his form. Hopefully, that goal was the start of 2021 White returning. The building was lively and the Southsiders were singing “Your defence is terrified, Brian’s on fire.”

The Whitecaps continued to get good chances and they were doing a good job of winning the ball back in the Dallas half.

In stoppage time, Jimmy Maurer decided to go after a long ball that was going wide. He was so far away from the six-yard box and the Whitecaps nearly took advantage. But then Vesilinovic was brought down in the 18-yard box and a penalty was awarded.

What was Maurer thinking on that play? He could have just let the ball roll out for the goal kick.

Luckily for the Whitecaps, Cavallini converted the penalty for the winner.

However, he left the game with a yellow card after retaliating after he got an arm in the back of the head. He will miss the next match as he accumulated too many yellow cards.

Getting one point against FC Dallas would have been huge. But getting three is gargantuan.

Sartini was rightfully pumped up with the win.

He spoke about the atmosphere at BC Place.

“The environment really helped us…the second half we destroyed them,” said the Whitecaps head coach.

He also spoke about the team’s ability to win games in the second half and bouncing back after giving up the first half goal.

“It shows the resiliency of the team but again, I would like a game where we up 2-0 at end of the first half but we did well… and I’m proud of the guys,” said Sartini.

And is he going to wear the Home is Vancouver sweatshirt on the road? He doesn’t know yet but he says Vancouver is the best city in MLS.

White was happy that he scored again.

“I’ve been wanting to get back on the scoresheet and I’m glad I could help the team win,” he said.

Cavallini spoke about the team’s resiliency.

“We managed to find that attitude of continuing until the end,” said Cavallini. “We’re finding that identity and it’s been good and we got to keep it up and keep coming.”

When asked about his yellow card he had this to say.

“If someone hits you on the head like that you got to react,” he said.

The Whitecaps head out on the road to face expansion Charlotte FC on Sunday. Kickoff is at 2:00 pm PST.