Canada tops the Octagonal just past the halfway 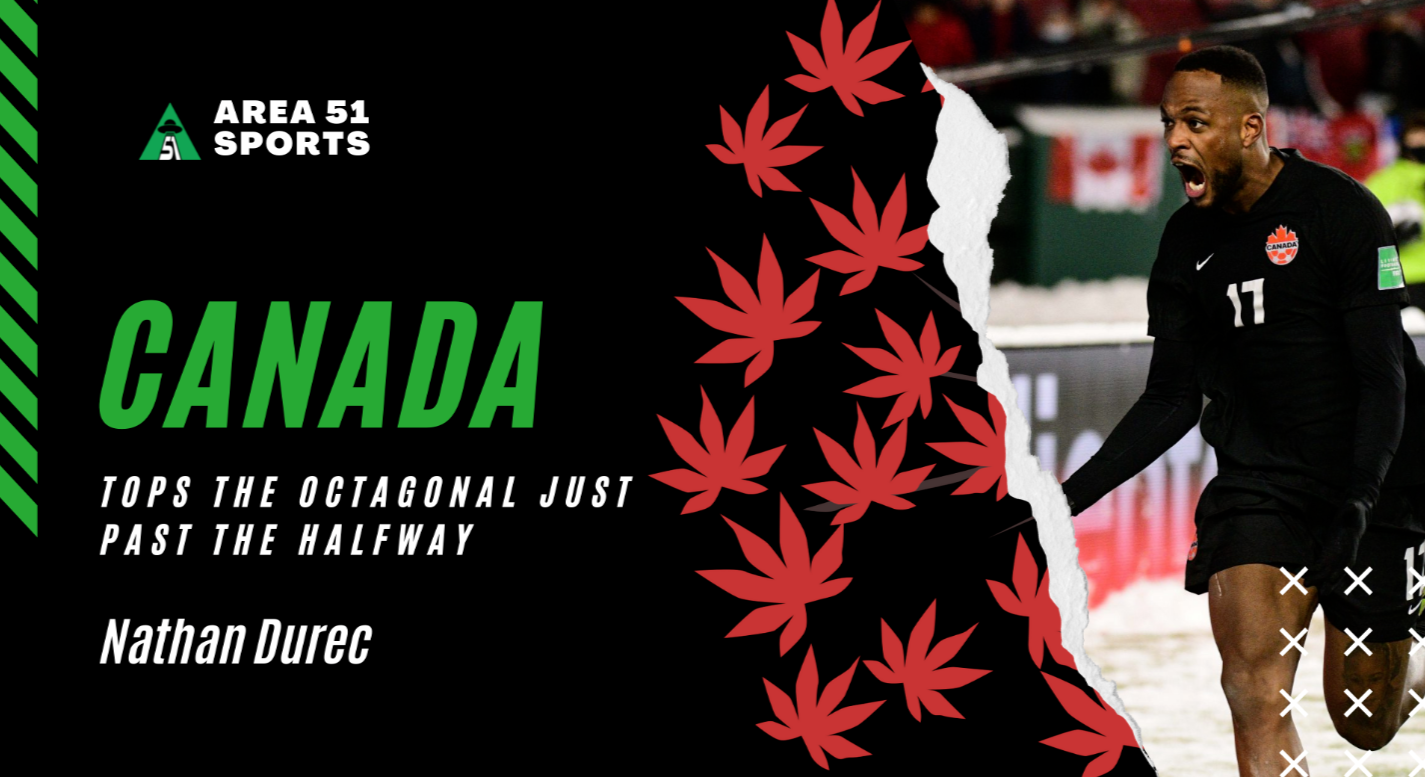 The Canadian men’s national team wanted six points from their two matches in this window.

They got the job done.

They came into this international window healthier than they had been in the previous one and ready for two matches at home.

And to make it more interesting, both matches against Costa Rica and Mexico were in Edmonton.

I was born in Edmonton and grew up in St. Albert, just outside of the provincial capital city’s limits. I know what Edmonton in November means.

Snow. And often lots of it.

While Costa Rica managed to avoid the fluffy white stuff on Friday, Mexico was not so lucky.

Between 15 and 20 centimetres fell over Monday and early Tuesday.

Here’s Terminal City FC’s recap of the international window that was.

Canada came into Edmonton wanting to play in front of a home crowd, but a new crowd than they normal do in Toronto. The occasion marked the return for Alphonso Davies, who got to play his first match in front of his childhood city since becoming a professional player.

And while Canada started on the front foot, Costa Rica was set perfectly to absorb the early pressure.

The first half saw Les Rouges dominate possession, but leave with little to show for it. Costa Rica seemed comfortable in trying to frustrate Canada’s attempts to move forward.

The players must have heard the same from their coaches, because the second half started much more progressive.

And it paid off. In the 57’, Jonathan David jumped up and hit a poorly punched ball from the Costa Rican goalkeeper into the net to give the home side the 1–0 lead.

It should be noted that Costa Rica was without Keylor Navas, their normal starting goalkeeper.

Instead, 17-year-old Leonel Moreira, who plays for Liga Deportiva Alajuelense in the top league of his home country, drew the start. A tough error for the youngster, to be sure.

Canada managed to hold onto the win, but it was easily apparent they had been missing an extra midfielder, someone that could quickly link up play for attackers, since the beginning of the match.

Even though David got the only goal and game winner, it was the defense that ensured victory.

Sam Adekugbe and Kamal Miller both played strong and could easily share my pick for Man of the Match.

On another note, this match marked the first cap for Iké Ugbo, who came on late as a substitute.

Nice to see Canada with another striker to add to the depth chart.

Conditions could not have been more different from the first match to this one. Snow and below freezing temperatures are difficult to manage.

But while Canada embraced and welcomed it, Mexico came into the match miserable. They arrived in Edmonton less than 24 hours before the match and did not set foot on the Commonwealth Stadium pitch until game time.

Mexico also moved away from their now-expected 4-3-3 formation to having three at the back that could easily transition into a back five with their wingbacks. Call it a response to the environmental conditions, an attempt to suppress the speed of Davies and Tajon Buchanan, or something else, Mexico does not change how they play lightly.

For Canada, Cyle Larin drew into this match, replacing the goalscorer from the previous match, Jonathan David. It was a bold move by John Herdman and one that would pay off.

From the first whistle, it was a rough affair, with both teams exchanging hard tackles, plenty of fouls, and yellow cards. Even both managers got caught up in the atmosphere of the match, earning themselves yellow cards, something quite rare to witness.

But for how exciting the first half was, it seemed as if both sides would go down the tunnels with nothing. But then Herman’s brilliance started to pay dividends.

Larin scored in stoppage time, ensuring both coaches had very different team talks then they had been planning. The Mexican goalkeeper was unable to grab the hard shot from outside the box by Alistair Johnston. Larin pounced on the ensuing rebound to give Canada the narrow lead at the break.

In the second half, he started back up where he left off, making it a brace in the 52’. That was his 14th goal for Canada this calendar year and his 22 nd overall, tying him for the most ever for the men’s national team with Dwayne De Rosario.

The hard play continued throughout the second half, but the referee now seemed content to let it happen. It was an odd contrast to the first half when more than 20 fouls were called and four yellow cards.

The final 15 minutes brought a last-gasp push from Mexico. Knowing they needed at least a tie to stay on top of the table, they threw everything at Canadian goalkeeper, Milan Borjan.

They managed to claw one goal back in the 90’, but it was not enough.

While the two goals by Larin qualify him for the Man of the Match, the play of Miller, Borjan, and Alistair Johnston kept Canada in the game.

Canada’s win was their first against Mexico since the Gold Cup in 2000 and their first on home soil since 1976.

It also marked Atiba Hutchinson’s 90th cap for Canada, moving him past Julian de Guzman to claim the number one spot on the all-time list.

Top of the Table

And with that, eight matches in, Canada sits on top of the FIFA 2022 World Cup CONCACAF qualifying table. They have a point on the USA and two on both Mexico and Panama.

Canada next plays Honduras, currently last in the Octagonal, on 27 January 2022.

Pro women’s soccer is coming to Canada in 2025