Canada enters second round of matches in the Octagonal 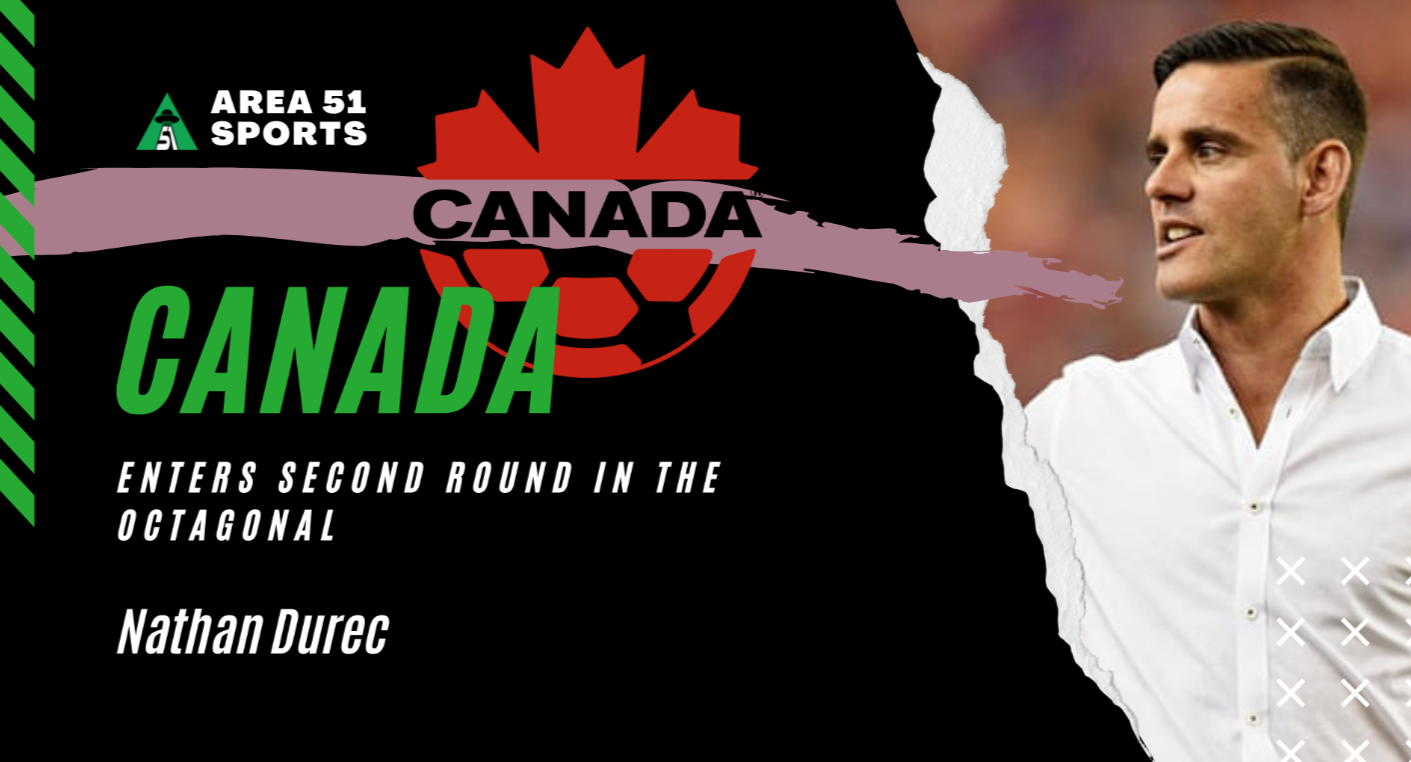 The second set of fixtures for Canada’s involvement in the Octagonal, the final round of CONCACAF’s World Cup Qualifiers, may be the team’s toughest yet.

A solid first three matches in September against Honduras, the United States and El Salvador saw the men’s team come out with a decent five points. And while they would have liked to have had a couple more points, the fact that everyone seemed to struggle helped Canada into a three-way tie for second in the table.

This all has Canada sitting pretty so far, and they should be feeling good about their start. But the competition is only going to grow harder. Up next are current point leaders and favourites to make the 2022 World Cup, Mexico, to be played at the Estadio Azteca on October 7. Canada will follow that match away to Jamaica on October 10 and one back home at BMO Field against one of the biggest surprise sides so far, Panama, on October 13.

Coach John Herdman has chosen to call a strong squad for the October matches, including Canada’s captain, Atiba Hutchinson, and his Beşiktaş teammate, Cyle Larin.

Both Vancouver Whitecaps Maxime Crépeau and Lucas Cavallini have received call ups, while Richie Laryea, Jonathan Osorio and Jacob Shaffelburg from Toronto FC and Zachary Brault-Guillard with CF Montreal are also in squad.

And while Canada has met up with Mexico as recently as this past summer in the CONCACAF Gold Cup, both Jamaica and Panama will be new opponents for many on the current roster.

To get ready for a set of matches that should definitely serve to widen the table, let’s take on each one, a game at a time. We’ll lay out each match based on the rosters announced, highlight any surprises and try out the well-worn sports reporter/journalist/blogger tradition of making a prediction.

You can judge me on those later. Please be gentle.

Mexico suffered heartbreak this summer as the United States beat them 1-0 in the dying minutes of extra time. But they have taken that pain and come into the Octagonal with hunger.

Gerardo Martino (or more affectionately, Tata, for many) has called up a squad heavy on Liga MX players. But the surprises come from the other side of the pond with two notable decisions: one a call up and the other an omission.

Raúl Jiménez from Wolverhampton Wanderers in England is perhaps the most noteworthy call up for Mexico. He has been called for World Cup Qualifiers before, but due to Mexico being on the United Kingdom’s COVID-19 so-called “Red List”, he had decided then not to accept. Countries on the red list require longer quarantine times when re-entering the UK, and this would have affected his playing time with his club.

There are rumours this time around of an agreement to let Jiménez play the first two matches and then return early from the Mexican camp. It remains to be seen if this is true. But given that Mexico plays Canada in the first match for this international break, there is a good chance he starts.

The other player decision of interest is Gerardo Arteaga with Belgian club, Genk. Given his age, he had been called up for the Mexican Olympic Games roster, but he did not go. Rumour is his omission this time around may be punishment for that. Arteaga maintains he did not accept the Olympic call up because of a family issue, but it did not keep him away from playing with his domestic club in the UEFA Champions League while the Olympic Games were happening.

Of other note, FIFA has cleared the way for LA Galaxy defender Julián Araujo to change his national eligibility to Mexico from the United States.

Make no mistake: this is Canada’s most difficult match in the Octagonal. Playing Mexico is hard at any venue, but at the Estadio Azteca with 80,000+ football fans cheering against you, it’s an imposing task.

But Mexico will not have the support of their fans in the stadium this time around. This match is the final game of Mexico’s current ban on fans attending World Cup Qualifiers because of homophobic chants during the Olympic Games Qualifiers against the Dominican Republic and the United States.

Mexico knows that a loss drops them down the table at a time when so many other countries are right behind them. A loss at this stage can make it difficult to climb back out of even the smallest of holes. After Canada, they play Honduras at home, a team that has not gotten off to the best start and will be demanding better. Away to El Salvador wraps up their current list of qualifiers.

Canada last played Mexico this past summer, when they were eliminated from the Gold Cup in the semi-final. It took them nine additional minutes of play to do it.

There is no reason Canada should go into this match scared. With Mexico not having fans in the stadium, Canada should be able to relax into the match much quicker than normal.

One additional note to consider: both Junior Hoilett and David Wotherspoon have opted out of joining Canada for the Mexico match. Both players play in the UK—for Reading and St. Johnstone respectively—and do not want the additional quarantine required for travelling to Mexico. They will be available for the final two matches of this round.

There’s a lot to consider going into this game, and I cannot pick a winner. Both sides will believe they can win.

Jamaica. Oh, Jamaica. After the first three matches, they sit dead last on a single point in the Octagonal. Not the start they hoped for, to say the least.

Among the 24-man group called up is West Ham’s Michail Antonio, player who currently has an eye for goal. Recently, he became his club’s all-time record goal scorer and was named the Premier League’s August Player of the Month. Look for him to either play up top or to come in from the wing, both positions he feels comfortable in.

The Vancouver Whitecaps also have a connection here with full back, Javain Brown. Look for him to play backup to Alvas Powell in defending along the right side of the pitch.

You have to go back a ways to find the last meeting between Canada and the Reggae Boyz, all the way to 2017. Canada had a comfortable 2-0 win at BMO Field that night, with current Canadian player, Osorio, bagging one of the goals. But that game is likely more remembered for Alphonso Davies, Canada’s young phenom, winning himself a red card and an early shower.

The match this Sunday will be in front of a Jamaican fan base that has been calling for current head coach Theodore Whitmore’s head after such a disastrous start. They will want to return to winning ways, but it should be noted that Jamaica’s downward slide has been happening for a while now. They will be hoping that rot is not setting in for longer.

I’m going for a Canada win here, even though it is an away game. Les Rouges need to pick up points away from the snowy north, and this is as good a place as any to do exactly that.

It was 2-0 the last time they met four years ago, and I am betting it will be the same this time around as well.

Panama comes in as the surprise after a strong start that saw them win against Jamaica and draw with Costa Rica and Mexico.

Head coach Thomas Christiansen has named a squad that is heavy on attacking players, perhaps giving a sense of how they mean to approach their upcoming matches against El Salvador, the United States and Canada.

There is little by way of history between Panama and Canada in terms of a sporting rivalry. In fact, you have to go back to 2014 to find the last time these two played one another, a friendly that ended in a 0-0 draw.

A few players from back then may remember that match, but for others on the Canadian roster, Panama represents a new foe.

Panama’s strong start has them as part of the three-way tie for second with Canada and the United States. And while they are a bit of an unknown quantity, playing in front of a full BMO Field should help Canada push ahead.

There are nine points up for grabs here. Nabbing seven of them against such opposition would be a task for anyone, but we should not discount Canada’s strength and increasing depth in key positions, the fact that Mexico will not have any fans and our rising stature in CONCACAF.

This may all be a pipe dream, but I would argue: Shouldn’t we dare to?

Pro women’s soccer is coming to Canada in 2025