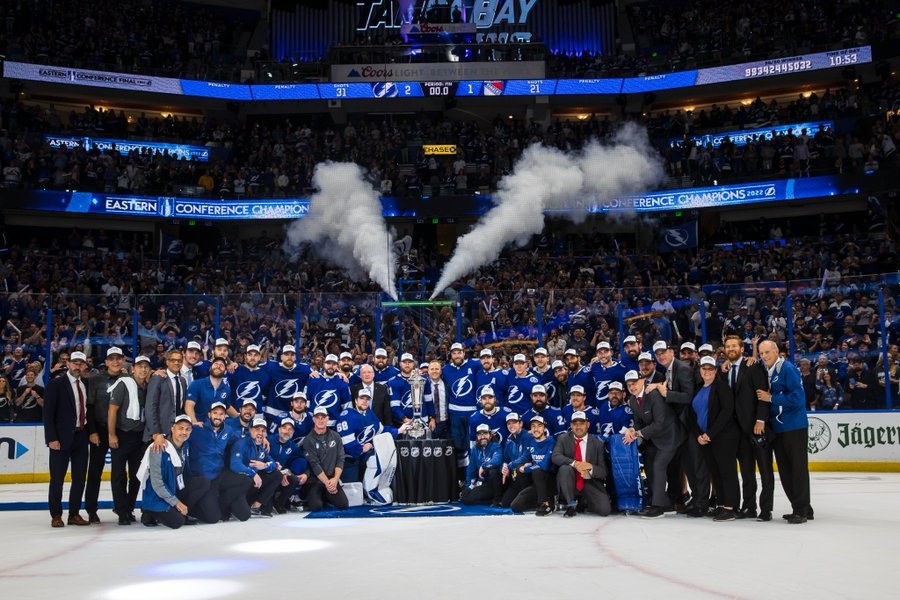 The weather in Vancouver is unpredictable. One hour it is sunny, the next it is raining and the one after that it could hail or something.

Luckily the weather is getting warmer but I am not prepared for another heat wave. It will soon be time to break out the AC and stock up on Freezies.

It’s cloudy as I type this and it looks like it could rain any minute. My ideal type of weather? Sunny but with a cool breeze. When days like that happen, I make sure to go outside even just for five minutes.

While the weather can be unpredictable sports can be too. Let’s get into Avid Thoughts.

The Stanley Cup Final is set

What a Stanley Cup Final this will be. The Tampa Bay Lightning will try to go for a three-peat while the Colorado Avalanche will look to win their first Stanley Cup since 2001.

These teams on paper are two of the best in the league. They are both skilled, and fast and have a mixture of young talent with seasoned veterans. The Bolts managed to hold the New York Rangers to one 5 on 5 goal in the last four games in a six-game series victory. The Avs looked unstoppable in their sweep of the Edmonton Oilers.

The Lightning are led by Steven Stamkos, Nikita Kucherov and Victor Hedman while the Avalanche boasts the likes of Nathan Mackinnon, Mikko Rantanen and Cale Makar.

This year’s final is going to be tough to predict. It’s almost a coin flip.

But there is one thing that separates these two teams and that is goaltending. You need good goaltending to win in the playoffs.

The Avalanche’s goaltending is my biggest concern for them. No, Darcy Kuemper and Pavel Francouz were not bad in these playoffs by any means. Kuemper seems to be 100% for game 1 on Wednesday but will Jared Bednar go with him or Francouz? Francouz has been a nice story but he or Kuemper will face Andrei Vasilevsky.

Vasilevsky has already become one of the best playoff goaltenders ever. When it is time to clinch a series, he has been lights out. Vasilevsky’s goals against average is 0.25, a save percentage is .991 and six shutouts in his last series-clinching game. Those are incredible numbers.

Let’s face it, Vasilevsky is a beast. I just have the feeling he will be the difference-maker again. Goaltending is key if you want to win a Stanley Cup.

I really want and do think this series is going seven. Expect a lot of back and forth action from both teams. This is going to be a fun final.

Corey Perry also looks to pull off a Marian Hossa. He is in his third straight final after losing to Tampa in the last two. Hossa played for the Penguins in 2008, lost to the Red Wings in the final, then signed for the Red Wings and they lost to the Penguins in the final the following year. Hossa finally won a Stanley Cup in 2010 with the Blackhawks. Could Perry do the same thing? He desperately wants that second ring.

Maroon also has a chance to win his fourth straight Stanley Cup.

My heart says the Avalanche but my head says the Lightning. Bolts in seven.

Moving back home, the Vancouver Canucks might have an offseason of fireworks.

Hockey insider John Shannon and Sportsnet 590: The Fan host and former NHL player Nick Kypreos made interesting comments about Jim Rutherford and his offseason plans on Thursday’s episode of the Bob McCown Podcast.

“Nothing would surprise me with Jim Rutherford in Vancouver,” said Shannon.

“Jim has gone in there with a plan, he’s taking his time with the plan,” said Shannon. “The two key dates for him are what he can do on the draft floor on [July 7 and 8] with a couple of his star players, and what he wants to do in free agency. [starts on July 13].”

Then Kypreos made some eyebrow-raising comments on Rutherford’s view of the Canucks locker room.

“He’s going to make a splash,” said Kypreos. “He’s going to change it up. He doesn’t like the room, thinks it’s a country club in there…There’s going to be a different look within six months for this team.”

Take it with a grain of salt, but the country club comment is an interesting one. If it is true, that could mean the players are too released and not taking their jobs seriously.

Which players could be leading the way with the country club lifestyle? We don’t know.

As I said before, this team could look very different on opening night. Many players on the roster could be on different teams since Rutherford wants to get rid of the Country Club vibe.

The BC Lions roar big

The CFL season has begun. I know what some of you are thinking. “It’s the CFL, nobody cares about it, it’s boring etc.”

The BC Lions always had a following but interest in them has declined in recent years. That is mainly due to the on-field product being mediocre. Also, the CFL can be boring but there are times when it can get exciting and chaotic. There is no in-between.

However, new owner Amar Dolan and the Lions’ marketing team deserve applause for how they organized their home opener. They had a big street party outside of BC Place before the game. There was live music from Bif Naked, food and drink stands, activities for kids and so much more.

It feels wrong to have a stadium that sits over 54,000 and the upper bowl is rarely used. Plus, BC Place has felt more like a landmark than a sports stadium in recent years. It was good to see the Lions have an attendance of just over 34,000. That was the biggest crowd for a Vancouver sporting event in years.

To make things even better, the Lions beat the Edmonton Elks. They didn’t just beat them, they destroyed them. It was 44-6 at halftime with the final score being 59-15. It seemed like the Lions scored a touchdown on every drive. Nathan Rourke is a Victoria boy and that is a great story. At just 24, Rourke has a ton of potential. Running back James Butler had three touchdowns in all of last season and he had four in the game against Edmonton.

The Elks were a bad team last year and apparently, they still are.

The Lions don’t play until June 25 when they host the Toronto Argonauts. Why in the world is the CFL giving a bye week for week two?

The big question is, can the Lions draw another big crowd on June 25? They can’t get OneRepublic to perform again, Toronto (I assume) is a better team than Edmonton and the home opener excitement will be gone.

It was great marketing by the Lions but they need to nail it again to get people to come back.

Maybe they can keep the street party thing going? Have a local artist perform before the game? A few years ago they had this thing called a Beach Party zone targeted toward younger people. Maybe they can bring that back.

I regret not being at the Lions game on Saturday night because a lot of people looked like they had fun. The Leos smashing the Elks was a big reason why but the party atmosphere was another reason.

Yes, winning will attract more fans but the Lions and the CFL need to attract young people. The party atmosphere before the game is one way to do it. Good on the Lions for attracting that many fans to their home opener but they need to be creative so they can have big numbers for all their home games this year.