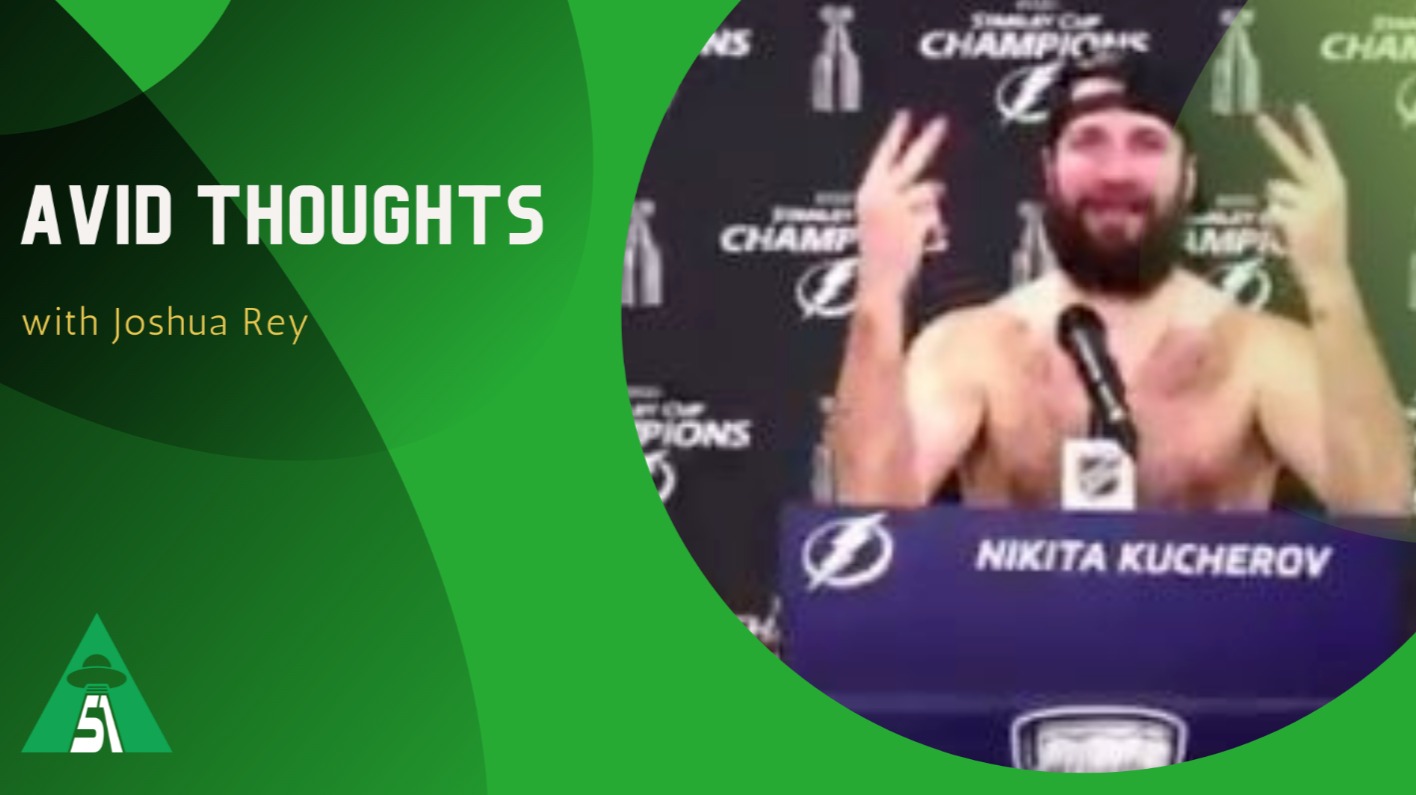 Quite the eventful week we have in the world of sports. There is a repeat Stanley Cup Champion, the Canucks are in rumours and rumblings season, baseball is in its midseason and the Euro 2020 final is set. I feel like each week goes by so fast. The past year and a half have accelerated. It feels like time decided to use the entire speedometer because it just goes faster and faster. I always wondered why time goes slow when you are working or doing a chore but it goes faster when you do stuff like playing video games or watching anime.

Enough about that, let’s get into Avid Thoughts.

The Tampa Bay Lightning are the 2021 Stanley Cup Champions after beating the Montreal Canadiens in five games. It just wasn’t meant to be for Montreal. Guys like Price, Weber, and Toffoli were playing through injuries and they just couldn’t keep up with Tampa’s play.

Canucks legend Luke Schenn is a back-to-back Stanley Cup Champion and everyone totally predicted Ross Colton would score the cup winner. Colton was the Lightning’s fourth-round pick in 2016. (118th overall.) A lot of the Lightning’s core was drafted beyond the first round. For instance, Nikita Kucherov was taken in the second round, Brayden Point in the third, Ondrej Palat in the seventh, Anthony Cirelli in the third, then Tyler Johnson and Yanni Gourde went undrafted.

No doubt Tampa was the better team. They had the star power, the depth, and a world-class goalie. Speaking of the goalie, Andrei Vasilevsky has a shutout in his last five elimination games and won the Conn Smythe. I knew it was either going to be him or Kucherov.

Speaking of Kucherov, that press conference with him was legendary. He was drinking Bud Light already wasted and without a shirt and said stuff like this:

I highly recommended you watch it if you haven’t already:

I don’t see why anyone could hate this. Kucherov just won the Stanley Cup for crying out loud. Let him have fun. NHL players are usually so serious and monotone and it’s great for the growth of the game for the players to show off their personalities.

The Lightning have a great top-six, excellent depth, and goaltending and it took years of trades, signings, picks, prospects, and development for them to become back-to-back Stanley Cup Champions. As a great writer and a great man once said “we need an army!” That’s what the Lightning got, an army. The Canucks need to do the same and it is going to take a long time.

Speaking of the Canucks, big rumour swirling around that Nate Schmidt wants out of Vancouver.

It was first reported by David Pagnotta of The Fourth period and Rick Dhaliwal says people he has talked to say the same thing.

It has been a rough and unlucky year for Schmidt. He has had a tough time adapting to life with the Canucks. At the time, sending a 2022 third-round pick to Vegas to acquire him looked like a steal.

He was asked to do more defensive play with the Canucks as Vegas had more capable defenders. Schmidt has been unlucky with pucks going off him into the net. Per Natural Stat Trick last season Schmidt had a career-low 45.34 Corsi for percentage.

The Canucks should at least listen to offers for Schmidt. It will be tough to trade him because he has four years left on his contract. No, this does not mean Schmidt should be traded for Oliver-Ekman Larsson. They would be getting rid of one big contract but will add an even bigger one. It’s like trading your slow computer for an even slower one. The Canucks should take a look at acquiring a top-six forward or top-four defenceman for Schmidt, one that could help the team now and in the long term but that isn’t easy. Trading Schmidt could also make the Canucks defence look worse unless they find a suitable replacement.

I wouldn’t trade Schmidt because I believe he can bounce back next season. If they, do it better be a good one.

Blue Jays the boys of summer

Yes, I am a Toronto Blue Jays fan. Not a Seattle Mariners fan. Why? It’s because I got hooked on the Blue Jays in 2015 thanks to the likes of Jose Bautista, Edwin Encarnacion and Josh Donaldson. It is also because the Blue Jays have the most coverage here in Canada.

Though I can admit even I can be tired of Sportsnet shoving the Blue Jays down our throats 24/7.

The Blue Jays have been fun for the most part. Other than the bullpen. Vlad Guerrero Jr is getting AL MVP and Bo Bichette is a star in making. Marcus Semien has been a great addition and despite the injuries, it looks like George Springer is living up to the hype.

The AL East is competitive minus the Baltimore Orioles. The Boston Red Sox currently leads the AL East at the time of this writing. The Tampa Bay Rays, Jays, and the New York Yankees behind. The AL wildcard is quite competitive with Toronto 3.5 games back of the Oakland Athletics. The Seattle Mariners are also in the same position looking to make the playoffs for the first time since I was a year old. (Seems likely they will collapse in August and September again.)

The bullpen has been an issue for the Blue Jay as mentioned above. It honestly makes me want to choke on my vomit at times. Luckily Ross Atkins has been looking for help starting with trading Rowdy Tellez for reliever Trevor Richards and minor league pitcher Bowden Francis. From what I heard, Richards is good.

Now all they need is an ace reliever.

Football coming home or to Rome?

The Final of Euro 2020 will be on Sunday at Wembley Stadium in London. We got the land of crumpets and tea vs the land of pizza and spro. England and Italy are an exciting matchup.

Italy beat Spain on penalties with Chelsea player Jorginho scoring the winner. England controversially beat Denmark in extra time with VAR being useless again because that was never a penalty. (There were also two balls on the pitch before that happened. Guess this makes up for Frank Lampard’s disallowed goal at the 2010 World Cup against Germany.)

England is a good team but Italy is better. They have the better defence and midfield but England has the better attack. Italy has been consistently good all tournament with their quick counterattack and ability to stop opponents from getting good scoring chances.

Frankly, I’m fine with either team winning despite how insufferable the English fans and media will be if football comes home for the first time since 1966. Both are good sides with players I like.

It’s going to be an exciting final and it has the makings of a classic.