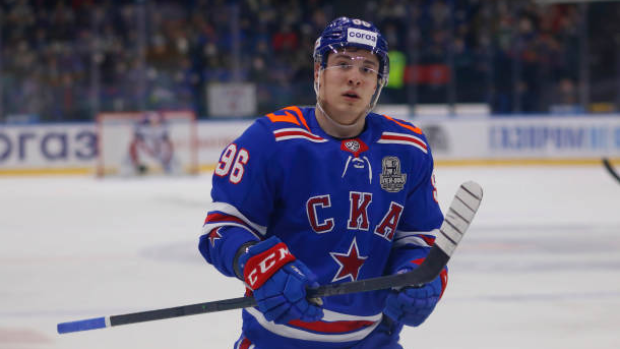 I feel like there was some sort of anniversary of some big Vancouver sporting event that happened this past week. Don’t remember it. Oh well, it probably wasn’t of any significance anyway.

What is significant is the fact that Vancouver will host some games for the 2026 FIFA World Cup. Looks like the housing prices will go up even more. But having the world’s biggest sports tournament in Vancouver will be a blast.

Anyway, let’s get into this week’s Avid Thoughts with yours truly.

Andrei Kuzmenko watch is on

Andrei Kuzmenko is a highly touted Russian free agent. The left-winger managed 20 goals and 33 assists in 45 games with SKA St. Petersburg in the KHL. He also managed seven goals and seven assists in 16 KHL playoff games with SKA.

He has been described as an elusive skater with excellent playmaking ability by DobberProspects. They also say he has boom or bust ability.

However Kuzmenko also has interest from the Edmonton Oilers, Vegas Golden Knights Los Angeles Kings, Florida Panthers, Nashville Predators, Detroit Red Wings and Carolina Hurricanes, Vancouver was his last stop on his tour and he spoke with the Canucks on Friday

Kuzmenko could slot in on the Canucks top six next season but the question is, can he translate his game into the NHL? Not all players from the KHL or European leagues can do so. The NHL is obviously the best hockey league in the world. It’s faster and more physical.

Remember Fabian Brunnstrom? He was a highly touted free agent out of Sweden and he signed with the Dallas Stars. In his first game, he had a had trick but that was the peak of his NHL career as he couldn’t find success in North America.

One example of a European free agent having success in the NHL is Artemi Panarin. He signed with the Blackhawks in late 2015 and of course, is one of the best in the NHL today.

If and that’s a big IF Kuzmenko signs with the Canucks, the expectations should not be too high. He needs time to settle in the NHL and there are things he needs to work on. For instance, Dave Hall of DobberProspects says despite his elite playmaking skills, his defensive game and backchecking need to improve.

For Kuzmenko, signing him on a cheap ELC is a low-risk, high-reward move. If it doesn’t work out, fine. The Canucks could send him to Abbotsford. But if it does, then that is great.

According to Chris Faber of Canucks Army, from what he has heard about the meetings, the Canucks chances of signing Kuzmenko have increased. That is a good sign.

Kuzmenko would be a good mentor for Vasily Podkolzin. The two also played together with SKA.

If the Canucks sign him, there is a chance he does well or doesn’t pan out. Again, he is a boom or bust player but the Canucks should do whatever they can to sign him.

The Avalanche are rolling over the Lighting

So the Colorado Avalanche are up 2-0 over the Tampa Bay Lightning in the Stanley Cup Final. Colorado is two wins away from their third Stanley Cup. Teams that go up 2-0 in the Final are pretty much guaranteed to win the Cup! I can’t remember a team that went up 2-0 and lost the series.

Game 1 was a thrilling game with back-and-forth action. Colorado came out flying and the Lightning showed their resilience. Andre Burakovsky scored the OT winner less than two minutes into the extra frame.

The Lightning had no answers. They were giving the puck away, couldn’t find ways to beat Kuemper and it looked like they gave up a Colorado breakaway every 30 seconds.

Andrei Vasilevskiy was the only Bolt who showed up. Even when the Lighting were down by a lot, he was still making big saves. If you didn’t watch hockey and I told you the team that lost 7-0 were the two-time defending champions, you wouldn’t believe me. Tampa looked down and out.

Colorado’s depth is amazing. Valeri Nichushkin, JT Compher, and Burakovsky are great acquisitions made by Joe Sakic and the Avs management team. Also, the fans singing to All the Small Things is great. I’m not sure why anyone would have an issue with it unless you dislike Blink-182.

Now I said before, don’t count out the Lightning. The next two games are at Amalie Arena and they have been great at home in this year’s playoffs. Their fans could give them the boost they were looking for.

However, the Lightning cannot put up another stinker, especially at home. The Avalanche will be motivated to get that 3-0 series lead. (Would be a disappointing final if it ends in a sweep.) Tampa is not facing the Dallas Stars or Montreal Canadiens. This is an elite team they are facing not some underdog team that went on a run.

Again, they have to figure it out, fast. Hedman needs to get back to his usual self and guys like Nikita Kucherov and Steven Stamkos need to get back on the scoresheet.

Important games up next for the Whitecaps

Since May 8, the Whitecaps have won seven out of ten matches in all competitions and have picked up 16 points in eight MLS matches since then. That’s pretty impressive considering that they only won one out of eight games before May 8.

The Whitecaps put up a good effort in Dallas on Saturday night with a 2-0 win. That was only their second road win of the season. After the win in Dallas, the ‘Caps have 20 points which is tied for the final playoff spot with the Seattle Sounders. For Vancouver, it is home, sweet home for the next four games.

Up first is York United in the semi-final of the Canadian Championship. The Whitecaps already beat two CPL teams: Valour and Cavalry. They need to exorcise the CPL demons one more time if they want to reach the final against either Toronto FC or CF Montreal. Oh, and if they beat York on Wednesday, BC Place will host the final.

York has not won a game since beating Pacific FC on penalties in the Canadian Championship quarter-finals. But the Whitecaps have to give 110% and not take York lightly.

New England Revolution come to town on June 26. They have been a middle-of-the-pack MLS team this year.

After that, it is LAFC on July 2. It will be the return of former head coach Marc Dos Santos (who is now an assistant coach with LAFC) and former goalkeeper Maxime Crépeau. I wonder what kind of reception Crépeau will get from the Whitecaps fans. It probably will be a mixed one. Legendary Italian defender Giorgio Chiellini will be introduced as an LAFC player on June 29 and will be likely available for selection on July 1 when the summer transfer window officially opens. So we probably won’t see him at BC Place on the second. It would have been cool though. (Or he could be there, just on the bench.)

LAFC are the best team in MLS right now. They always find ways to win. They beat the Whitecaps 3-1 in the City of Angels in April. Chiellini bolsters a defensive corps that includes Ryan Hollingshead and former Whitecap Doneil Henry. LAFC also have Carlos Vela and Kellyn Acosta to lead their attack so the Whitecaps will have a tough test for them on the day after Canada Day.

After that, Minnesota United come to town on July 8. Western Conference games are important because a lot of teams are very close with the Whitecaps in the standings. At the time of this writing, Minnesota has 18 points just two points behind Vancouver.

Head coach Vanni Sartini has talked about the importance of home games and getting wins in front of their fans. Since he took over on the touchline last August, the Whitecaps have only lost twice at home and both times were to the Portland Timbers.

Andres Cubas has arrived and players like Tristan Blackmon and Caio Alexandre are starting to get healthy, so with a mostly fit squad, the Whitecaps have great opportunities to pick up points at home and move closer to the playoffs.

Nothing has happened for Chelsea in the transfer window so far. But other Premier League teams have made moves. Tottenham Hotspur has signed Ivan Perisic for example. Reigning champions Manchester City signed Erling Haaland, and Liverpool signed Darwin Nunez. Even Arsenal made a couple of signings. They signed Fabio Viera (if you’re an Arsenal fan, that last name should sound familiar.) and Marquinhos. (No, not PSG Marquinhos. Different guy.)

For Chelsea, it’s been nothing so far.

However, football transfer insider Fabrizio Romano says the club is moving but quietly. That makes sense.

Chelsea has to move some players out, particularly Romelu Lukaku. Talks of a loan move back to Inter Milan have been going well apparently. I still can’t believe Chelsea paid 97 million pounds for a sweaty thumbs-up merchant only to loan him back to Inter.

The Blues have been linked to numerous players including Jules Kounde of Sevilla, Mattias De Ligt of Juventus, Ousmane Dembele of FC Barcelona and now Raheem Sterling of Manchester City.

Apparently, Chelsea is also linked with Gabriel Jesus and Nathan Ake (Chelsea academy graduate by the way) also of Manchester City. So part of the plan to end the Man City dynasty is to sign their players. Not a bad plan.

Would I love Sterling to Chelsea? No. Would I hate it? No.

Sterling is an interesting player. He is a good playmaker and dribbler who can play on the wing, as an attacking midfielder or even as a striker. The problem with him is inconsistency. He can go cold at times and has missed some awful sitters.

The rumoured price tag is about 35 million pounds and at that price, I’m fine with signing Sterling. He’s still in the prime of his career at 27. Though I would rather have Chelsea sign Jesus from City, I would still welcome Sterling.

For the first time in four years, the Golden State Warriors are the NBA Champions. They defeated the Boston Celtics in six games in a series which I predicted would go to seven.

It looked like the Warriors were finished a year ago. The dynasty was ended in 2019 by the Toronto Raptors and in 2020 and 2021, the Dubs missed the playoffs. They struggled with injuries and players leaving but here they are, on top of the basketball world again.

Stephen Curry has to be one of the best point guards of all time now. He has won numerous accolades and he along with Klay Thompson (The splash brothers) have been filling the bucket consistently for years now.

You have to be happy for Canadian Andrew Wiggins who had an excellent final. Steve Kerr has done a tremendous job with the Warriors and is a big reason why they bounced back. The Warriors have always been an entertaining team under Kerr.

I still hate the fact that in the NBA (NFL and MLB do this too) that the owners get the trophy first. They didn’t play! They just sat in the press box eating popcorn!

Congrats to all Warriors fans especially the ones who were Warriors fans before 2015. Also, it is an interesting coincidence that since Kendrick Lamar dropped albums in 2015, 2017, 2018 and 2022, the Warriors have won the NBA title.

That concludes this week’s Avid Thoughts. Check back next week for more!