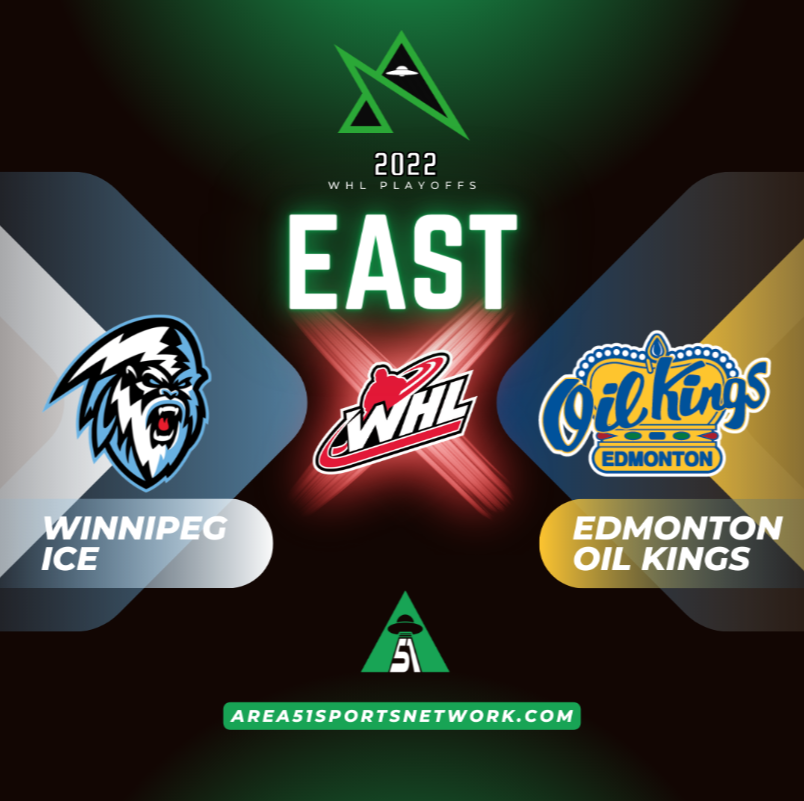 It was bound to happen. The two best records in the regular season are going to meet in the Eastern Conference Finals. The Edmonton Oil Kings and the Winnipeg ICE will meet for the right to represent the East for the Ed Chynoweth Cup. The two teams split their games this season 2-2. The ICE finished seven points ahead of them. The ICE ranked second in CHL rankings. The Oil Kings were ranked third.

The future star power is also something to watch. For the Oil Kings, you have Dylan Guenther, Jake Neighbours, Kaiden Guhle, Justin Sourdif and Sebastian Cossa. For the ICE, Matthew Savoie, Connor Geekie, Carson Lambos, Zachary Benson, and Jack Finley. The Oil Kings swept both the Lethbridge Hurricanes and the Red Deer Rebels. The ICE beat the Prince Albert Raiders and the Moose Jaw Warriors.

How do these two teams matchup?

The Oil Kings have the first round pick in Sebastian Cossa. Cossa is 8-0 with a 1.48 GAA and a .932 save percentage and three shutouts. Two of them were against the top scoring duo of Arshdeep Bains and Ben King of the Red Deer Rebels. 8 of the 12 goals were in two games. The Hurricanes scored four in Game 4. The Rebels scored 4 in Game Three.

For the ICE, it’s Daniel Hauser. He’s 8-2 with a 1.81 GAA and a .922 save percentage, and one shutout. Six of the ICE eight wins were by three or more goals. However, the Warriors were able to find a way to solve Hauser in Moose Jaw by scoring three goals in the final three games in this series.

While neither of them have had to be spectacular, Cossa has been a bit more solid. But Hauser cannot be underestimated. This is going to be very interesting to watch.

The first round pick is Carson Lambos. The leading scorer on the ICE is Benjamin Zloty. Zloty has 11 assists, while Lambos has eight, Behind them, the ICE have good depth in Nathan Orzeck and Jonas Woo, and quiet trade deadline addition Tanner Brown. They may not have the star power other defence groups have in the WHL. But they do their job very well.

For the Oil Kings, there’s the pairing of Luke Prokop and Kaiden Guhle. They have a combined five goals, 17 points and + 18 between them. Then you have Logan Dowhaniuk and Simon Kubicek. They were a combined nine points and a + 10. Then there is the versatility of Carson Golder.

In their eight games coming into this, the Oil Kings allowed less than 20 shots in three games. Two of those were against the Rebels. Their performance in these playoffs have been very impressive. But the ICE have also been impressive. They haven’t allowed more than 3 goals in any of their playoff games. They allowed 20 or less shots in 6 of the 10 games. However, the Warriors were able to push through for some goals and gave the ICE a challenge. But it isn’t wasn’t enough for the Warriors to win.

The Oil Kings have eight goals from their defence man. While the ICE only have two. But the goals aren’t the reason. Prokop and Guhle are a strong pair. Dowhaniuk and Kubicek are too. The way they held down Bains and King were impressive. Both are very strong, but give it to the Oil Kings.

This is about the drafted, the about to be drafted, and they will be drafted, First the Oil Kings have Guenther (Coyotes), Neighbours (Blues), and Sourdif (Panthers). The ICE have Matthew Savoie, and Connor Geekie who will be drafted high in this year’s draft. There is also Zachary Benson, who is adding himself to an already loaded and exciting 2023 NHL Draft class. Beyond that, it’s going to be the depth/secondary scoring that will be the difference. I use that loosely because this so called secondary are stars and quality in their own right.

Let’s start with the Oil Kings. Guenther leads the way with 12 points. Carter Souch has nine points. Demek and Sourdif have seven points. Let’s not forget Josh Williams who was second on the team with 82 points during the regular season. He has five points in these playoffs. Sourdif has added so much to the Oil Kings. Size, smarts and versatility.

For the ICE, it’s not Savoie and Geekie leading the way. It’s Zachary Benson who has 18 ( 8G, 10) points in these playoffs. That’s good for fourth in WHL scoring. That is followed by Mikey Milne with 15 (9G, 6A), Connor McClennon with 14 (6G,8A). Same with Owen Pedersen (5G, 9A). Then there is Jack Finley with 11 (6G,5A). Finley has been fantastic. Especially when Savoie was injured during the Raider series.

They have the best group of forwards in the WHL. They are deep. Any of their four lines can score. And they can score in bunches. They have jumped on teams quickly with a lead. They have fought back from deficits quickly, and they have killed momentum with scoring quickly. They are on a different level. The Oil Kings do have a strong top six to nine. But they don’t have the depth the ICE do. It will come down to the play of Sourdif and Finley in this series. Both are talented Swiss army knives that will have an impact in this series. Whoever is more effective will give their team the edge.

I’m certain it will be a long series. I’m certain there will be wild moments, hard moments, and exciting moments. There isn’t much separating these two teams. It may go down to home ice. The ICE were 29-3-1-1. The Oil Kings were 29-4-1. Special teams will obviously be a factor The ICE have the number one power play in the playoffs at 34.2%. The Oil Kings are the top penalty killing team in the playoffs with 90%.I hope this meets the excitement of the series. I hope, and expect, it to go seven. Maybe even overtime? I’ll go with the ICE. But it’s close.

Zach Benson On The Way To CHL Top Prospects Game