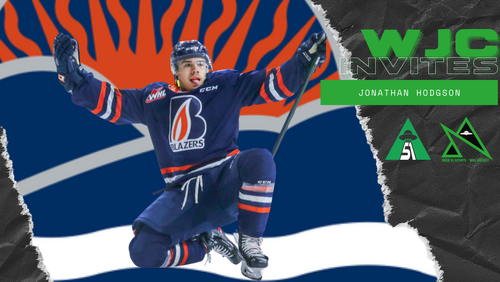 The Kamloops Blazers have been one of the top teams in the Western Hockey League since the outset of the 2021-22 season. Fittingly, a trio of the Blazers top talents have been recognized with invites to selection camps or preliminary rosters of their respective nations for the 2022 World Junior Hockey Championship (WJC).

Come with us as we take a closer look at each of the players hoping to wear their country’s colours over the holidays and how the Blazers might adjust to their absence from the lineup.

Veteran goaltender Dylan Garand is one of three netminders named to Canada’s 35 player selection camp roster . This will be the second WJC camp for Garand, who saw action in one game as the backup to Devon Levi -then of the Carleton Place Canadians of the junior-A Central Canada Hockey League- in 2021.

A fourth-round draft pick of the New York Rangers in 2020, Garand has been arguably the top goaltender in the WHL so far this season posting a league-leading save-percentage of .931 and a 1.90 goals against average that trails only Braden Holt of the Everett Silvertips, as of December 4 th , while logging two shutouts. Garand is on pace for career-best numbers in all major statistical categories, and has backstopped Kamloops to 14 wins. His 18 games played also puts him on pace to top his previous career high of 42 set during the 2019-20 season.

There will be a competitive battle for time between the pipes among Canada’s three goaltenders, which also includes 2021 Detroit Red Wings first-rounder Sebastien Cosa from the WHL’s Edmonton Oil Kings, and 2022 NHL draft-eligible goalie Brett Brochu from the London Knights of the Ontario Hockey League.

The 19-year old netminder is thought by many to have an inside track to the starter’s role. Garand is the only returning goalie from the 2021 Canadian squad that also featured former Blazers captain and Calgary Flames prospect Connor Zary, who earned an assignment to the American Hockey League as a 20-year old to start 2021-22.

“We are going to be so pumped this time around to be playing in an NHL rink [Edmonton] that is full,” Garand told the Times Colonist in his hometown of Victoria, BC. As he mentions, the tournament is taking place in Edmonton and Red Deer, AB for the second consecutive year, this year with fans, after the 2021 edition was played without spectators due to COVID-19.

Blazers co-captain Logan Stankoven receives his first invite to Canada’s WJC selection camp months after being selected in the second round by the Dallas Stars in the 2021 NHL Draft.

“He’s a fearless puck-carrier, always driving the inside, and never shy about setting up shop near the net-front off of the puck,” said Elite Prospects in their 2021 NHL Draft Guide. “He plays a north-south game and always attacks at an unrelentingly high pace. The mechanics behind his shot are so clean, exerting downward force while pushing his top hand off his body.”

Stankoven was named Blazers’ co-captain this season at 18-years of age. He wears the ‘C’ during home games and has responded well to the added responsibility, leading the team with his 12 goals and 29 points in 21 games. Those figures have him on pace for career highs after previously registering 29 goals and 48 points in 2019-20. The hometown product from Kamloops, BC netted seven goals and ten points in just six games during the shortened 2020-21 hub season, leading to his selection in the NHL Draft, 47 th overall to the Stars.

Stankoven has twice previously donned the maple leaf and has shown the ability to fill the net regularly on the international stage. He was an alternate captain of the 2021 Under-18 World Championship squad that won the gold medal, tallying four goals and eight points in seven games. Stankoven also struck for four goals in five games at the 2020 Under-17 World Hockey Challenge.

Canada boasts a deep pool of forwards to choose from for this year’s WJC. Among the 21 forwards invited to camp are 19 NHL draft picks including ten first-rounders.

Defenseman Marko Stacha is a veteran of Slovakia’s junior national program, having suited up in each of the previous two WJC’s, and figures to be a focal point of the team’s defense core in his third tour of duty this year.

The Blazers acquired Stacha in a trade the division rival Vancouver Giants before the start of the 2021-22 season. The 19-year old defender was selected by the Giants in the 2020 CHL Import Draft and suited up in 22 games for Vancouver in 2020-21, chipping in a goal and six points.

The physical and mobile blueliner has enjoyed a strong start to his time in Kamloops and has contributed offensively with five goals and nine points through 21 games. Stacha could be primed for a similar rise in prominence at his third WJC with Slovakia as a third year veteran.

Garand and Stankoven will leave the Blazers this week for Canada’s selection camp, which runs December 9-12 in Calgary, AB. Stacha will begin camp in Piestany, Slovakia on December 11. The tournament itself runs December 26 through to January 5. This poses the possibility that the Blazers could be without three of their relied-upon veterans for nearly a month.

The Blazers are tied with the Everett Silvertips as the highest scoring teams in the Western Conference as of December 5, so they should be able to find ways to continue to score goals, but the absence of their top line center will be felt nonetheless.

Candidates to step up in the goal scoring department include 19-year old winger Matthew Seminoff who is tied with Stankoven for the team lead in goals with 12.

Caedan Bankier, a third-round pick of the Minnesota Wild in 2021, and Josh Pillar, a Minnesota fourth-rounder in 2021, will both be looked upon to continue their strong seasons.

Daylan Kuefler, a 19-year old winger, has more than doubled his career goal total already this season, and overage winger Nick McCarry has emerged as an excellent facilitator up front with five goals and 21 points in his first 21 games. Prior to this season, McCarry had totalled 23 goals and 41 points in 104 career games, all with the Medicine Hat Tigers.

Without Stacha, veteran rear guards Quinn Schmiemann and Viktor Persson should become even more of a focal point of the Blazers’ defense unit.

A sixth-round pick of the Tampa Bay Lightning in 2019, Schmiemann is currently producing offensively at nearly a point per game to start his fourth campaign in Kamloops. Standing 6’2’’, Schmiemann is another physical presence on the Blazers back end.

Persson was a seventh-round pick of the Vancouver Canucks in 2020, and was taken by the Blazers in the CHL Import Draft. With import players unable to play in the WHL due to COVID-19, Perrson played the 2020-21 season in his native Sweden split between junior and Brynas IF Gavle in the Swedish Hockey League.

Standing 6’2’’, 190 lbs, Persson has been steady for the Blazers during the early portion of this season and could be pushed to find his next gear during Stacha’s absence.

The biggest test for any Blazer during the World Junior period surely belongs to goaltender Dylan Ernst who will receive the lion’s share of playing time in the crease while Garand is away.

The 17-year old has showed well in limited action so far as the backup, winning all three of his starts while posting a 2.62 goals against average and a strong .923 save percentage. Kamloops could play as many as nine games while Garand is away, providing an excellent opportunity to give Ernst a stretch of games to see how he responds to his first short stretch as the number one option in goal.

The trade-off for team success in the WHL often time means having to deal without marquee players for stretches of time while they compete in the WJC and other international events. The Blazers have a history littered with stars who introduced themselves to the rest of the hockey world at the WJC, and this next trio is aiming to blaze their trail on the world stage.