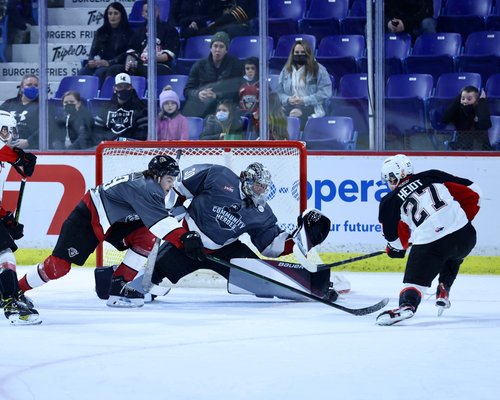 The Prince George Cougars downed the host Vancouver Giants 3-2 on Friday night, on the strength of Ethan Samson’s two-goal performance including the overtime winner.

The nationally televised contest at the Langley Events Centre was the eighth meeting of the season between the B.C. Division opponents, and the first of back-to-back meetings between Prince George and Vancouver.

Friday’s tilt marked the first game in approximately two weeks for both clubs following pauses for both teams due to COVID-19 protocols. It was also a matchup of two hungry teams looking to stop their own recent slides. The Cougars entered the game winless in their last five games, while Vancouver was trying again to steer out of a 2-9-0-0 tailspin in their previous 11 contests.

Both teams came out flying in a wide open first period filled with end-to-end action and scoring chances at both ends. Vancouver opened the scoring on Tyler Lies fifth goal of the season on a put-back after a rebound on a shot by Zach Ostapchuk.

The Lies marker was the only scoring in the period as both goaltenders stole the show. Cougars goalie Tyler Brennan, who was recently rated as the top goaltender in midterm rankings for the 2022 NHL Draft, made 15 saves in the frame. Vancouver netminder Jesper Vikman countered with 14 stops.

The Giants doubled their lead to 2-0, 4:32 the second period on the ninth goal of the season for Florida Panthers prospect Justin Sourdif.

Prince George remained engaged in the game after the second goal and began to take over the edge in play for the remainder of the period. Samson drove a slapshot by Vikman at 12:37 into the middle period to cut the deficit in half, and exactly two minutes later, Koehn Ziemmer broke into the Giants zone and notched his 11th goal of the season to tie the game at two apiece heading to the third period.

Ziemmer, who was described by Cougars head coach and general manager as a “top-notch goal scorer” in a pregame conversation with TSN’s Craig Button, is coming off of a strong month of December when he registered six goals and 14 points in 12 games.

Each goaltender stood tall in a scoreless third stanza with Brennan making 14 more of his 37 saves on the night in what was one of his best games of the season. Ziemmer had the best opportunity with a penalty shot midway through the period, but was stopped by Vikman as the game went to overtime.

Extra time saw a flurry of early action at both ends before Samson slid home the winner on a rebound off of a slap shot by Connor Bowie. The second goal of the night for the Philadelphia Flyers prospect was his eighth of the season, and gave the Cougars their first win in six games.

Recent Cougars acquisition Carlin Dezainde had a strong game, assisting on Samson’s first goal and was stopped by Vikman on a partial breakaway in the second period.

For the Giants, Ottawa Senators’ prospect Ostapchuk had a productive night, assisting on both Vancouver goals and logging five shots on goal. Vikman made 35 saves on 38 shots in goal.

The Cougars’ victory draws them to within two points of Vancouver for sixth place in the Western Conference. Each team has now won four games apiece with four games remaining in the season series.

The Giants will try to exact some revenge in the rematch between the two teams, slated for Saturday night in Vancouver.