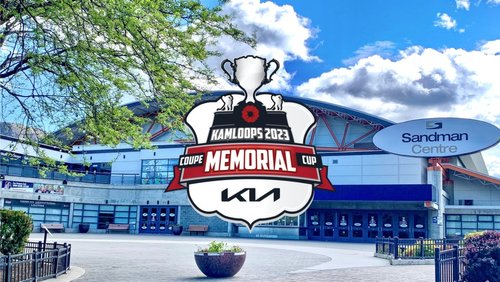 The marquee event in junior hockey is destined for the Tournament Capital next year.

On Friday, it was announced that Kamloops, BC and the Kamloops Blazers will host the 2023 Memorial Cup, marking the second time the Canadian Hockey League’s champion will be crowned in Kamloops for the first time since 1995. The event will take place at the Sandman Centre from May 26 through June 4, 2023.

The announcement was made prior to puck drop of game five of the Western Hockey League’s (WHL) Western Conference Final in Kamloops between the Blazers and the Seattle Thunderbirds. Blazers co-owner and governor Tom Gaglardi made the announcement alongside past Blazers greats Jarome Iginla and Scott Niedermayer.

Former Blazer Jermaine Loewen was also in attendance and helped to fire up the crowd of more than five thousand on hand before the Blazers’ game five win, thanks to Daylen Kuefler’s overtime winner.

Gaglardi is also owner and governor of the NHL’s Dallas Stars and their American Hockey League affiliate Texas Stars.

Both Iginla and Niedermayer won the Memorial Cup with the Blazers the first time Kamloops hosted in 1995. Iginla, a 2020 Hockey Hall of Fame inductee, is part of the Blazers ownership group led by Gaglardi and includes fellow former Blazers and NHL players Shane Doan, Mark Recchi and Daryl Sydor.

Head coach Don Hay and captain Darcy Tucker led that 1995 squad that put the finishing touches on the Blazers’ dominant run in the 1990s with their third Memorial Cup title in four years.

“We are very excited to bring back the Memorial Cup to Kamloops after an almost 30-year hiatus,” said Canadian Hockey League (CHL) president Dan MacKenzie. “The Blazers and the City of Kamloops put together a first-class bid and will be outstanding hosts.”

Kamloops was previously awarded the 2020 Memorial Cup, which was later cancelled as a result of the COVID-19 pandemic, which led to the cancellation of the 2020 and 2021 Memorial Cups.

The 2022 Memorial Cup, the first since 2019, will take place in Saint John, New Brunswick, hosted by the QMJHL’s Saint John Sea Dogs on June 20-29. This year’s tournament was pushed back to allow all three CHL leagues to complete their playoffs after COVID-19 impacted scheduling to different degrees for each. The 2023 edition in Kamloops will return to its usual timing.

The host Blazers will receive an automatic bid to compete in the four-team field, which will again feature the winners of the WHL, Ontario Hockey League (OHL) and the QMJHL in addition to the host club. In the event the Blazers win next season’s WHL crown, both Ed Chynoweth Cup finalists will advance to the Memorial Cup.

The Blazers have participated in six Memorial Cups all time, winning in 1992, 1994, and 1995, and they will have full intentions of defending home ice again. The 2021-22 Blazers won the B.C. Division racking up 99 points under the direction of third-year general manager and head coach Shaun Clouston with a roster full of talent at all ages.

Dallas Stars 2021 draft pick and hometown product Logan Stankoven leads the offensive attack, and New York Rangers prospect Dyland Garand was one of the league’s top goaltenders.  After the headliners, the Blazers had four players ranked by NHL Central Scouting for the upcoming draft, including forward Fraser Minten and defenseman Mats Lindgren who were ranked 28th and 47th, respectively, among North American skaters.

The next order of business for the Blazers will be trying to punch their ticket to the 2022 Ed Chynoweth Cup Final against the Edmonton Oil Kings. Kamloops leads the series 3-2 ahead of game six of the Western Conference Final, scheduled for Sunday at the ShoWare Centre in Kent, WA.