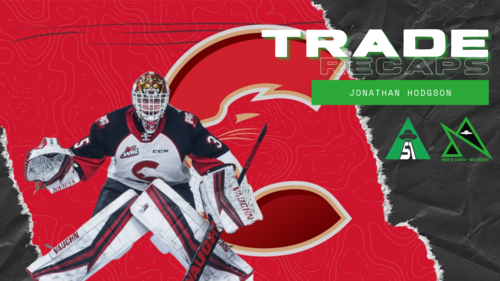 The end of the Western Hockey League’s Christmas break signalled the start of trade season for the Prince George Cougars.

In a pair of deals executed on Monday, the Cougars traded franchise goaltender Taylor Gauthier to the Portland Winterhawks and then added a pair of young forwards in a three-way pact with the Saskatoon Blades and Medicine Hat Tigers.

In a headline-grabbing move to start the day on Monday, the Cougars sent 20-year old goaltender Gauthier to Portland in exchange for overage defenseman Jonas Brondberg and a package of three future draft selections. (2023 third round pick, plus conditional fifth round selections in 2024-25.)

This deal signals the end of an era in Prince George as they part ways with one of the longest-tenured goaltenders in franchise history. In parts of five seasons wearing a Cougars uniform, Gauthier ranks third in franchise history among goalies with 166 games played, and collected 53 wins with a career 3.19 goals against average and a .906 save percentage. The native of Calgary, AB appeared in 50 or more games in consecutive seasons between 2018-20, recording five of his six career shutouts in that span, and was posting career-best numbers so far this season.

“Taylor has been the face of this team for the last several years and it’s tough to trade a player and person of his quality,” said Cougars head coach and general manager Mark Lamb in a press release . “He loved playing here and was a fan favourite for that reason. He was a leader off the ice as he was someone his teammates looked up to. He was a pleasure to coach, and we wish him all the best in his next phase of his career with the Winterhawks.”

Despite the Cougars being unable to qualify for the playoffs during his time with the team, Gauthier said that he will look back on his time in Prince George fondly.

“I had no idea how much of an impact this city and team would have on me as a player and person,” Gauthier said in a message posted to his Twitter account. “The fans, ownership group, coaches and most importantly my teammates have given me so many opportunities to grow into the person I am today. I truly loved every second I spent wearing the Cougars jersey (and) it was an absolute honour to represent the city of Prince George.”

From a Portland perspective, the acquisition of Gauthier bolsters a goaltending picture that already consisted of 19-year old Dante Giannuzzi and 18-year old Gordon Lochlan. Giannuzzi has been the Winterhawks’ primary starter for the past two seasons, but has seen regression in his conventional stats so far this season, likely prompting head coach and general manager Mike Johnston to bring in a second bona fide starter as they look to improve on their current fifth-place standing in the Western Conference.

Trading Gauthier now makes sense for the Cougars for multiple reasons. Despite him being on pace for a career year with a personal best 2.75 GAA and .923 save percentage at the time of the trade, Prince George is still fighting for the final playoff spot in the Western Conference and if they do qualify, seem likely to be a steep underdog in their first round matchup. With that in mind, collecting a haul of draft picks (2023 third round, conditional fifth round in ‘24 and ’25) to help stock the cupboards in the future will likely be the most beneficial for the team in the long term.

At the same time, the acquisition of Brondberg fortifies the Cougars’ blueline with a big veteran presence in an effort to further insulate the team’s new goaltending tandem that looks to be Tyler Brennan and Ty Young for the rest of this season, pending further moves.

“Jonas is the type of player we wanted to add to our blueline,” said Mark Lamb.

“He’s an experienced, veteran leader who has great size and poise. We see him being a great complement to our young core of defencemen.”

Brondberg has represented Denmark on multiple occasions including at the U18 and U20 Division 1A tournaments. He made a strong first impression during his first WHL season in 2019-20, scoring nine goals and 22 points in 50 games as an 18-year old with the Winterhawks but hasn’t replicated that level of offensive prowess since then, posting six assists in 20 games in the shortened 2020-21, and five assists in 20 games with Portland this season before the trade. Still, he brings that veteran presence to the Cougars young back end, which features just one other player over the age of 18.

The final major factor that enabled the Cougars to go ahead with dealing Gauthier was the confidence they have in their aforementioned new goaltending duo of Brennan and Young.

Now 18-years old, Tyler Brennan debuted in one game during the 2018-19 season as a 15-year old, and became Gauthier’s primary backup for the following campaign.

The native of Winnipeg, MB has a 3.26 GAA and a .906 save percentage in 15 games so far this season and has appeared in 34 games over the past four seasons. With Gauthier now moved on to Portland, Brennan will have an opportunity to grab the starting role moving forward.

Behind Brennan is 17-year old Ty Young who has a chance to claim a full-time spot in Prince George. The product of Coaldale, AB has split this season between the Cougars, where he has played in four games, and 17 games in the Alberta Junior Hockey League with the Calgary Canucks. Brennan also played in three games for Prince George in 2020-21.

Later the same day, the Cougars jumped in on a complex three-team trade with Saskatoon and Medicine Hat, which sent a pair of 17-year old forwards and more draft picks on their way to Prince George.

In their portions of the transaction, the Cougars dealt 17-year old forward Kyren Gronick to Saskatoon and sent a fifth round draft pick to Medicine Hat. They received 17-year old forwards Cayden Glover and Carlin Dezainde plus a conditional second round pick in 2023 from the Tigers. Additionally, the Cougars received a third round pick in 2023 and a seventh rounder in 2025 from Saskatoon.

The deal adds to the Cougars forward depth in the 2004-born age group, and further boosts their stockpile of picks in upcoming drafts.

“We see both Cayden and Carlin as good fits to our young group of forwards,”

said Mark Lamb in a press release . “We feel both have plenty of upside and we look forward to adding them into our line up.”

WHL Draft by Medicine Hat. He had three goals and five points in 15 games this season for the Tigers, and played in 30 career games for Medicine Hat after playing in 15 games as a 16-year old in 2020-21. The native of Brandon, MB is a “physically strong player with offensive upside,” according to Cougars’ Director of Scouting Bob Simmonds. Simmonds noted Glover’s shot as a strength and his track record as a goal scorer prior to reaching the WHL.

Dezainde is a 5’11’’, 160 lb forward who logged two assists in 21 games this season in Medicine Hat after recording a goal and four points in 13 games as a 16-year old rookie last season. Simmonds describes the Calgary, AB product as and “excellent skater who brings a lot of versatility.”

Prince George did have to relinquish a quality player in the deal, sending 17-year old forward Kyren Gronick to Saskatoon. Gronick collected eight goals and 20 points in 38 games in a Cougars’ uniform since debuting in 2020-21 and was given an immediate opportunity with the Blades, skating on their top line in his first game with his new team.

INVESTING FOR THE FUTURE

The tenor of both of these trades from a Cougars’ perspective is definitely a concentrated effort to invest in the future by adding a total of five draft picks and a pair of young players. At the same time, these moves should allow them to continue competing for a playoff spot this season, thanks in large part to the addition of Brondberg on the blue line.

With plenty of time remaining before the WHL trade deadline arrives on January 17, the Cougars are in a pivotal few weeks as they assess the upside of this year’s team will weighing potential opportunities to continue to build for the future.