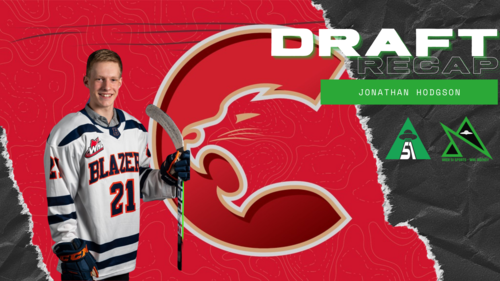 The Prince George Cougars selected an exciting player with Western Hockey League bloodlines with their first pick in the 2021 WHL Draft on Thursday. In all, the Cougars added 11 players to their prospect pool, all in the first eight rounds of the draft.

With the 15 th overall pick, the Cougars selected defenseman Tyson Buczkowski from the Saskatoon Blazers U18 AAA team. The 6’, 165 lb native of Saskatoon, SK was considered one of the top available defensemen in this draft class, with strong ability at both ends of the ice including the ability to create offensively.

Buczkowski is currently his team’s top-scoring blueliner with four goals and 16 points through 20 games so far this season.

“Tyson has a very complete game for a defenceman,” said Cougars’ Director of Scouting Bob Simmonds. “He generates a lot of offence from the blue line, he can run a power play, and is a very strong defender below the dots. He checks off a lot of boxes.”

Buczkowski has demonstrated leadership capabilities having served as captain of Team Saskatchewan at the 2021 WHL Cup for draft prospects in October. He contributed a goal en route to a bronze medal finish for his team.

As mentioned, the Buczkowski name may be familiar to WHL fans. Tyson’s father Paul enjoyed a distinguished WHL career of his own, playing five seasons (1990-96) with the Saskatoon Blades. The elder Buczkowski owns the Blades’ franchise records for games played (337) and career assists (224). In his best season in 1994-95, Paul led WHL defensemen in goals (42) and points (98), and finished his WHL career with 124 goals and 350 points.

With their second selection, the Cougars injected size and skill up front by taking forward Hunter Laing 33 rd overall. A forward from the Rink Hockey Academy U16 Prep team, Laing is already listed at a hulking 6’6’’, 190 lbs and leads his team in scoring this season with 12 goals and 26 points in 17 games.

The Kelowna, BC product is the son of Kelowna Rockets’ assistant coach Quintin Laing, who previously played for the Rockets (1996-20) and skated in 79 NHL games across parts of four seasons for the Chicago Blackhawks and Washington Capitals.

The Cougars continued to focus on size with their third round selection of defenseman Matt Lahey 63 rd overall. The rearguard from the Pacific Coast Hockey Academy in Langford, BC was part of Team BC’s gold medal-winning team at the 2021 WHL Cup.

Prince George tabbed one goaltender in this year’s draft, taking Madden Mulawka in the fifth round, 100 th overall. Standing 6’1’’ 195 lbs, Mulawka was named player of the game twice for Team Alberta at the most recent WHL Cup en route to a silver medal finish.

The WHL staged its US Priority Draft for draft-age (2006-born) players who reside in the United States. The Cougars had an opportunity to land a potential impact player as owners of the fourth-overall pick as well as no. 41 in the two-round draft.

With their first pick, fourth overall, Prince George selected defenseman Yoonho (Roy) Chung from the Los Angeles Jr. Kings 15s. A dual citizen of the United States and South Korea, Chung has six goals and 29 points in 34 games so far this season, his first campaign on the blue line after switch from playing forward.

“Roy has only played hockey four years and but has tremendous upside,” said Bob Simmonds. “He is a real student of the game and a strong skater who is developing rapidly.”

The Cougars then selected Nick McLennan with their second round pick. A 5’9’’ 175 lb forward was born in Edmonton, AB and now resides in Anchorage, AK where he currently plays for Team Alaska 15U AAA.

“Nick plays a hard game, and he is really physical; he’s strong on pucks. He’s a raw talent but has a heavy shot and his game has lots of room to grow,” Simmonds said of McLennan, who has three goals and nine points in 23 games so far this season.

The next chapter in the Buczkowski or Laing family legacies in the WHL could be written in Prince George, or perhaps a player selected lower in today’s picks will break through and become one of the Cougars’ next stars. The Cougars hope to have just identified some key pieces that could return the team to prominence in the near future.

The ‘Teddy & Toque Toss’ makes its return to the CN Centre in Prince George on Saturday, December 11 th when the Cougars host the BC Division-leading Kamloops Blazers. Area 51’s Lizz Child authored this piece about the longstanding Teddy Bear Toss tradition that benefits children and others in need in many WHL cities during the holidays.