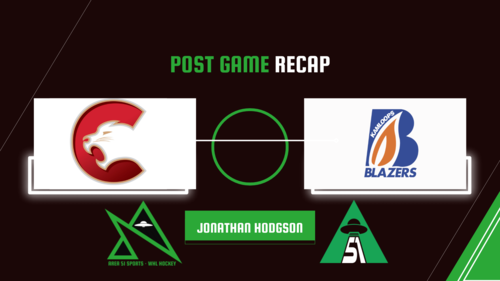 lifted the hometown Prince George Cougars over the Kamloops Blazers by a score of 3-2 on Saturday night.

The B.C. Division battle pitted first-place Kamloops against the Cougars, who were coming off of a win over the Kelowna Rockets on Friday.

The home side drew first blood four minutes into the opening period on Samson’s third goal of the season, which sent thousands of stuffed animals and toques flying from the stands on ‘Teddy & Toque Night’ at the CN Centre.

Kamloops equalized midway through the first period when Matthew Seminoff sniped his 14 th goal of the campaign, and then the middle frame belonged to the netminders. Gauthier stopped all 14 Blazers shots in the second period while Dylan Ernst made nine saves to send the game to the final 20 minutes still tied at one apiece.

Prince George regained the lead 3:28 into the third period when 16-year old centerman Riley Heidt potted his fifth of the year past Ernst. The 17-year old Ernst started in goal on consecutive nights for Kamloops, with usual starter Dylan Garand as well as co-captain Logan Stankoven and defenseman Marko Stacha all away at Canada’s World Junior Team selection camp.

Again, the Blazers had an answer just 31 seconds later when Reese Belton tied the game at two with his sixth goal of the season. The home team was undaunted, though, as Samson struck again, delivering the eventual game-winner less than three minutes later.

It was the first two-goal game in the Western Hockey League for the 2021 sixth-round pick of the Philadelphia Flyers. The 18-year old is tied for the team-lead with 15 points and is tied for the club lead for goals by a defenseman with four. Both are already career-highs after just 24 games.

Gauthier, the overage goaltender from Calgary, AB, was tremendous from start to finish for Prince George, making a season-high 48 saves on 50 Blazers shots including 18 stops in the third period.

The win is the Cougars’ (10-14) first in four tries against Kamloops this season, as they finished a two-game weekend sweep and have now won three of their past four games.

Prince George is one point up on the hard-charging Victoria Royals for seventh place in the Western Conference. After enduring a tumultuous 1-11-1 start to their season, Victoria is 7-0-2 in their last nine games to vault themselves back into the playoff picture.

Kamloops (18-6-0-0), meanwhile, is 1-4 in their last five games, but are still positioned four points back of the Everett Silvertips for top spot in the Western Conference. They will have to rediscover their stride with their three World Junior hopefuls potentially unavailable through the first week of January.

Next up for the Cougars is a two-game midweek set at home against the Vancouver Giants on Tuesday and Wednesday. The Giants (13-10-0-1) sit fourth in the Western Conference and have lost three straight games after being dropped by a 5-2 final in Victoria on Saturday.

The Blazers host Victoria on Wednesday before the next matchup with the Cougars, this time at the Sandman Centre in Kamloops on Friday.