Gannon Laroque: From the Island to the Bay 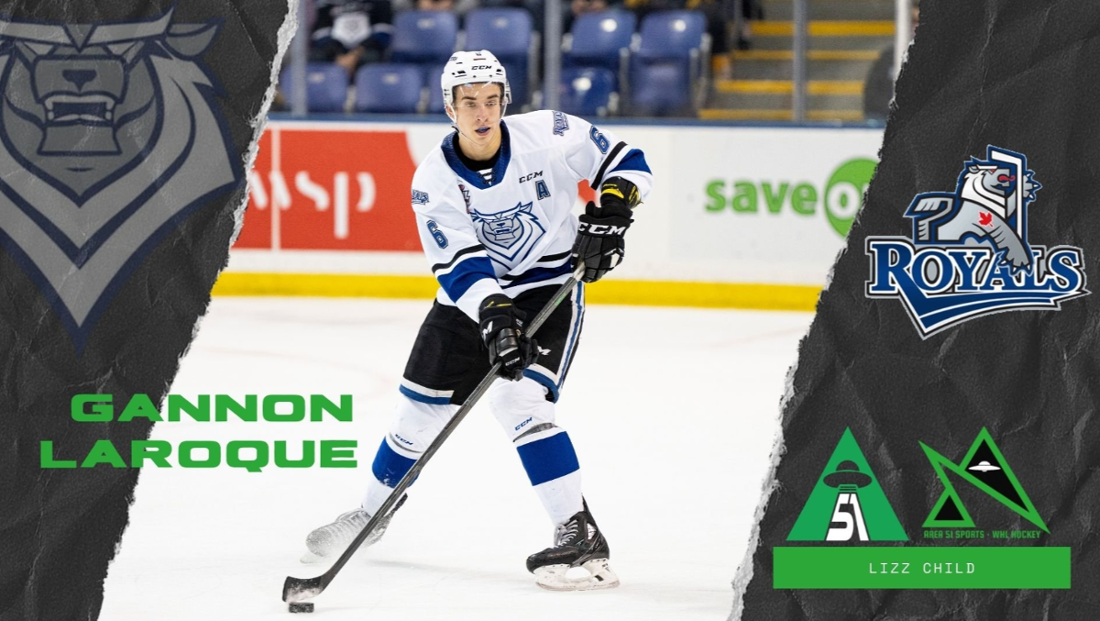 The Victoria Royals were within one game of a playoff run but were stopped by the Spokane Chiefs on the final night of the regular season. Royals defenseman Gannon Laroque has had an eventful few weeks since his WHL season came to a close, all leading up to an NHL contract with the San Jose Sharks. However, it did all start with a disappointing ending with his team in Victoria, after what would have been an incredible final push to make the postseason.

“It was definitely hard. I just remember, after the last game, I was just kind of in shock and I didn’t really get undressed after the game. I was just kind of shocked, but it presented a pretty good opportunity for me to go down to the AHL with the [San Jose] Barracuda, so lots of mixed emotions.”

However, the guy we all know as Pebble had this to say about how the WHL season left him feeling:

“Definitely hungry for next year, to go back and do really well.

“It was definitely really fun, though. I knew a few of the guys from camp there, and so I kind of felt comfortable right off the hop.”

Fans in San Jose noticed that from his first game. The 6-foot-2, 190-pound defenceman looked right at home with the pros. Despite this, Laroque came away from the experience with a new set of goals moving forward.

“Just game-wise, [there were] much faster, bigger, stronger guys, so a goal for me going in the summer is gaining 5-10 pounds of muscle and continuing to get faster, just to be able to get to that next level and to be confident in my game there.”

While he has previously shared that the message at his first Sharks camp was to not overcomplicate his game, it’s been a recurring theme for Laroque throughout the season. It was even his focus as he joined the Barracuda roster.

“I knew it was going to be much faster than what I was used to, just because the guys are much older, bigger, and stronger. So I really just came in with a mindset to keep it simple and see the play quickly. Make the first pass, not overcomplicate things, that was the goal, and then just stick to it.”

The Barracuda ended their season on a 15-game losing streak, but it just gave the Edmonton native more of a reason to come back better next season, for whatever team he plays with.

“Everybody wants to finish on a good note, right? So it was definitely fun to play in Vegas against their farm team there and everything, but it was definitely a hard end, and in Victoria for sure, but just come back next year and be even better.”

Speaking of his games in Vegas, three of Laroque’s four games in teal have come in Sin City. One preseason game with the Sharks in September 2021, and two with the Barracuda in April 2022. The fourth game was his AHL debut, which came in Bakersfield, against the Condors.

Laroque had one day off in Vegas before the final two Barracuda games of the season, but he says there was not much exploring on that day.

“I kind of got to see a little bit of Vegas, but I was really just focused on hockey at that point.”

In fact, the day off in Vegas was the same day as the WHL’s draft lottery, which the Royals blueliner noted that he watched in his hotel room. He remembered that Victoria had a shot at the first overall pick (which went to the Edmonton Oil Kings) and decided to tune in to see where his team would pick. While the Royals ultimately landed the seventh-overall pick, Laroque was in for another surprise during the draft lottery show.

“They were starting to do the [division] awards and I was named. I was really happy. I didn’t even know about it until my name was called, but it was really an honor to take home the BC Division Defenceman of the Year Award.”

While none of his Barracuda teammates were in the room to celebrate with him in the moment, he soon heard some congratulations from some WHL alumni on the team.

“Some of the other former WHL guys like Nick Cicek [Portland], [Montana] Onyebuchi [Everett, Kamloops], and a few of those guys just congratulated me because I saw it probably on their social media or something. Then the coaches saw it, so there was a little congratulations and then it was back to business.”

Just over a month later, the BC Division defenceman of the year would find himself putting pen to paper and signing his first NHL contract. However, the contract alone is not enough for the newest Shark.

“It was a whirlwind, for sure. It feels really good to be able to do that, but it’s just another step in the journey. I want to be able to play full-time in the NHL. So just that next step, I have to keep working hard and come back and have a great year next year as well.”

While Laroque had an outpouring of offense in his second season in Victoria, he knows where his defensive strengths lie.

“I just think my physicality is a big thing for me. Being able to separate man from puck and just my stick position has become another thing for me. Just being able to deflect lanes and take people off their games a little bit.”

“I’ll have to go with Jason Spizawka. He might be one of the smartest kids you will ever meet. Then, I’ll have to go with my D partner Wyatt Wilson. He is definitely one of the funniest guys you will ever meet. You need that in a stressful time of a zombie apocalypse. Third, I’ll go with my captain, Fizer. Tarun Fizer. Just an all-around great guy. I learned a lot from him from a leadership perspective. So being able to take things from him, I think that would be fun.”

For the record, he thinks this group would survive. However, if he had to bet on who would make it longer between this team and the squad he picked from the Barracuda, he says it would be close, but Spizawka may give the Royals team the better odds.

As for his teammate in Victoria who might not survive a zombie attack?

Best thing he’s done so far this offseason (other than sign an NHL contract):

“Just being able to golf and see my friends that are local here in Edmonton. Being away from them in Victoria definitely was a change, so it’s good to see them all again and spend time with them and go golfing.”

(I think he likes golfing. Good thing California has some great weather for that too!)

Keeping up with the WHL playoffs?

“I have. Yeah. It’s really close, in Edmonton. I’m back home in Edmonton, so I might have to go catch a game or two. But yeah, I’m excited to see what happens.”

You won’t be getting any bold predictions on who wins it all from Laroque though.

“I’ve got some close buddies on both ends so, I can’t really choose a team.”

“Yeah, I just think we’ve set the mindset already. All of us guys kind of stay in touch. We’re all just itching to get back to Victoria. We’re really excited about the year ahead and we’re going to be fun to watch. I think we’re going to be really fun. Lots of our group are coming back next year, so we’re already really close. So we’re really looking forward to it.”