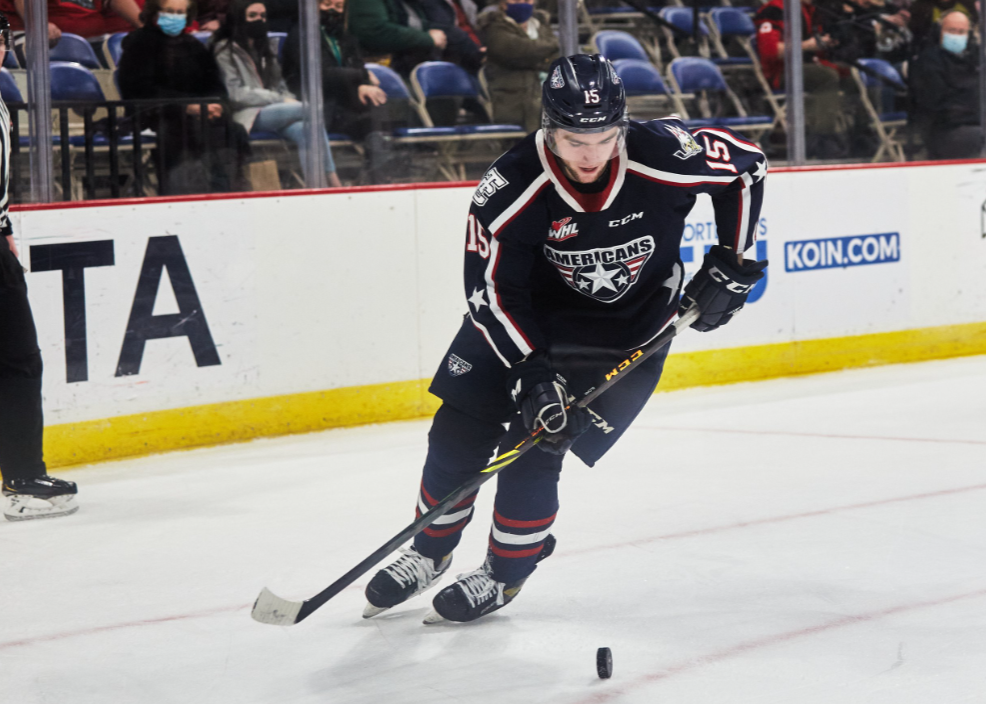 Look, the Tri-City Americans are a team you should be watching. While they may be at the bottom of the standings at the moment, this is not a team you should be ignoring; they’re energetic, play a fast game, and have a lot of heart. It’s clear these players love the game and the team they play for.

The Tri-City organization has a talented group that will provide the Ams and their fans plenty to look forward to over the coming seasons. There are a number of players on the team currently that are going to give fans hope and excitement for the next few years. Which will be discussed in future Area 51 pieces. Every player gives fans some reason to sit up and pay attention.

Unfortunately, the issue at the moment seems to be that the team is struggling to put it all together. In terms of their search for consistency and cohesiveness, Tri-City is a relatively young team; featuring nine rookies. With a new coach behind the bench, it only seems natural that it would take time to pull all the pieces together. No doubt, though, they will find their way.

Why Do We Watch

One of the most exciting things about watching and being a fan of the WHL is seeing a group of young players develop and grow together in a fairly short amount of time. The Americans are the team that may very well be in the best position to allow new fans to get the full experience of being a WHL fan. While finding your preferred team can be something akin to figuring out your perfect cup of coffee, once you find it, it’s like coming home. At the moment, the Ams are standing in the door with arms outstretched. This family is welcoming you home. Even if it’s just for a few hours.

With two rookie goaltenders in net this season, Tomas Suchanek and Nick Avakyan have been showing that they have so much potential and are prepared to carry the workload in net. Suchanek has shown the passion he has, and while it runs over from time to time, there’s no doubt he has the drive to win. His partner in net, Avakyan has no quit. If you haven’t already seen his herculean effort in net in his December 28th outing against the Portland Winterhawks, go check it out. The California-native fought to keep himself in the game while also supporting his team, despite ultimately falling 9-2. Watch the game. He alone will give you reason to cheer for this team.

With exciting rookie players like Lukas Dragicevic on defense and forwards like Dwayne Jean Jr. you get to see the future of this team and this league. Dragicevic, while having played six games last season, is still considered a rookie and has already received recognition in the CHL this season. In his first season in the WHL Jean Jr. has been turning heads all season on his own. He brings his own brand of passion and excitement to the game. When you’re watching him play, you can’t help but notice where he is.
Then you have guys like Jake Sloan (F), Parker Bell (F), and Sam Huo (F) who are leading the pack and showing that this team has some to live up to. This trio has been pulling off incredible performances lately

While Gavin has slotted into three of his five eligible games for the Ams, the 15-year-old has appeared in 14 games this season for the Delta Hockey Academy U17 Prep team, recording 24 goals and 58 points. He has also spent one game with the DHA U18 Prep team and has picked up a goal and an assist.

Currently, Arpin is unsigned by the Ams but is playing for the Rink Hockey Academy Winnipeg U18 team. The 15-year-old defenseman has six goals and 10 assists in 21 games this season. Standing at 6’2, it’s clear he will be a commanding presence on the ice.

This team is fun to watch and over the course of a game, they manage to compel you to want to root for them. Their next game is at home against the Seattle Thunderbirds on January 7th with puck drop scheduled for 7:05pm. Be sure to tune in on CHL TV if you can or head out to Kennewick to catch the game in person if you are able!