Dwayne Jean Jr: Being Himself and Turning Heads for Tri-City 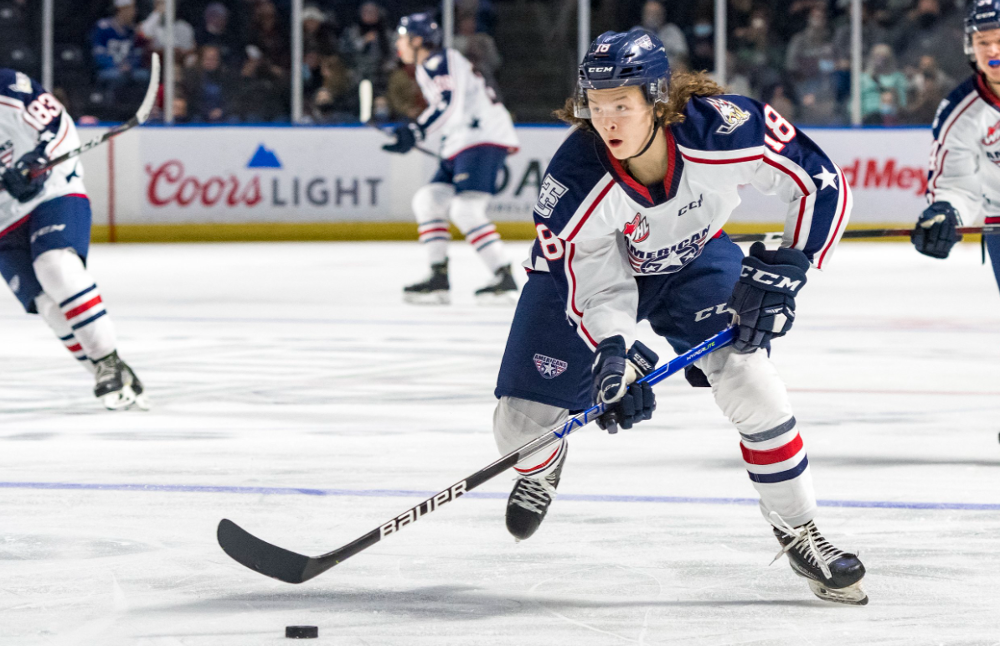 Dwayne Jean Jr. and his fantastic hair are turning heads every game for the Tri-City Americans. Come get to know a little more about him.

Let’s start at the top. To do that, you need to learn a bit about his parents. Jean Jr. himself says his start in hockey was “kind of weird.” Perhaps weird is not the perfect descriptor, but his story certainly is unique.

“My dad grew up in Chipewyan Prarie [First Nation], so just pond hockey there, and my mom grew up in a reserve in Kinuso, right outside Slave Lake, Alberta. My mom, she’s a curler and my dad didn’t really play hockey. They couldn’t really afford it.”

Because of his mom, did he ever think about curling instead of hockey?

“No, my body is not coordinated enough for it. My mom tried to show me, but I couldn’t do it,” he laughed.

However, Jean Jr. found a love for the ice early and never let go.

“I was probably about two when I went to downtown Edmonton. There’s an outdoor rink there. My dad put a helmet on me, and I didn’t want to leave. My dad ended up putting an outdoor rink in our backyard. From there, I just loved the game and I just kept skating and I kept doing whatever I could do to make it to the next level.”

Now in his rookie season with the Americans, Jean Jr. has been working on consistency and confidence in playing at the WHL level. Off the ice, he is enjoying his time transitioning from living in Edmonton, Alberta, to Tri-Cities, especially the warmer weather.

“It’s a little bit smaller from where I’m from, so it’s just adapting to everything. The weather is definitely way nicer here than it is back home, so I get to wear some shorts some days, and you don’t have to be in a winter coat and winter boots, so it’s nice.”

Putting in the Work

When asked if there is a player he models his game after, Jean Jr. stated that there isn’t one specific guy.

“I just think it’s 100% me,” he stated, “I’m just trying to do whatever I can do to help us win and get out there every shift trying to work my hardest and use my speed to my advantage.”

However, there was one player Jean Jr. noted as someone he looks up to for what they bring to the game.

“TJ Oshie. He works hard and just grinds. That’s what I just look up to.”

It’s all about the work ethic for Jean Jr., but that isn’t the only thing he brings to the team. Aside from his speed, he says his energy is one of his most significant contributions.

“I feel like I can use my energy towards helping the guys on the team. Sometimes that’s coming in right from puck drop and just going in. I think it just kind of gets the team going in the first few minutes of the game, which really helps in the long run.”

The fans have noticed the work that the 17-year-old forward puts in on the ice every game.

“Something that I learned when I first came into this league is that if I want to get out there and use my shift to my advantage and have the trust of my coach, that I have to use my speed. So usually, I’m first on the forecheck and first on the backcheck. It’s something that I’ve heard from all the fans that they just love seeing my backcheck so once I hear that it just gives me more momentum to just keep doing the same thing game in and game out.”

His numbers this season are deceptive. Jean Jr. has been impressive all season. Heading into the 2022 NHL Draft, he should be in discussions for what he has shown throughout the year.

Perfect in shootouts this season, Jean Jr. has had two attempts and used both to claim wins for the Ams.

“It’s a lot of practice behind the scenes. My first one, I’d say I was just kind of lucky. I was just going to come in and shoot, but he gave me time and space to deke him.”

As for the second time, he had a little extra motivation to make sure he found the back of the net.

“The second time, I heard Portland’s bench kind of giving it to me before I got out there, so I just knew I had to capitalize just to show them I could do it two in a row. I was coming down, and I saw low glove open, so I just shot, and it went in.”

Someone Others Can Look Up To

Number 18 on the Tri-City roster has built a bit of a fanbase for himself already. With so many supporters and young fans with their eyes on him, he knows there is a responsibility to be someone who can be a positive role model for others.

“If I can be someone, for some kids on the reserve, that they can look up to me and want to be like me, that is something that I’ve dreamed of. I know I looked up to Jordin Tootoo when I was growing up. I wanted to be like him, just doing whatever I could to follow in his footsteps. Even with Carey Price playing here, even though he’s a goalie. If people can look up to me, even if it’s not Aboriginal kids, just kids from back home or even from Tri-Cities, it’s something I dreamed of, for little kids to look at me as their big role model.”

As for his seemingly constant cheerful attitude?

“I’m just being myself. My parents always raised me to be a happy kid and just enjoy the moment because you never know when you’ll get this moment again. You don’t know what’s going to happen, so I just come to the rink with a smile on my face every day. I just get ready to work and make sure I have a smile on my face no matter what and just let the negative energies just flow over my head and refill it with positives.”

February 1 saw the Prince George Cougars visit the Americans for the second and final time this season. On the roster for the Cougars were Jean Jr.’s childhood friend, Keaton Dowhaniuk, and cousin, Zackary Shantz. The game was just the second of Shantz’s WHL career.

Jean Jr. spoke on what that experience was like prepping for and participating in the game.

“I couldn’t fall asleep for my pre-game nap. I was just really excited because I missed the game against Portland on Sunday, so I knew coming in on Tuesday I was playing my childhood best friend and my cousin for the first time. I knew that I had to make a big impact because it was definitely a special night. A night that I’ll remember for the rest of my life.”

Jean Jr. and Dowhaniuk grew up playing bantam and midget hockey together, but this was the first time they had seen each other since Christmas. The two were able to chat for a bit after the 2-0 Prince George victory.

“He gave me little tips on stuff that I can do better. That is something that I can call [him] my best friend. Whatever I can do to help Zack like what Keaton did for me, giving me the tips about what I could do better in my game.”

Before their respective WHL camps, Jean Jr. had lived with Shantz. They also had a chance to talk after the game Tuesday night. What advice did he share with his cousin following his second game in the Dub?

“I just told him it’s a hard League. Just play your game.”

Memory so far this season…

With a decent stretch of the season remaining, there is ample time for more memories to be made, but there have already been standout moments.

“That’s kind of hard, but definitely just the first two games. Just kind of jumping into the season. With my first game, I scored the winner in the shootout and then the second game, just winning back-to-back games in my first two western league games. Also, definitely my first goal. It was set up by my best friend on the team, Deagan McMillan with a great pass and I got to capitalize in my first seven games. I think it was something to get my season going.”

Superpower he would want…

“I think I’d want to be like Superman. To just fly over and see all the views of the big cities and just all of his powers.”

You know we had to discuss how awesome it would be to see his flow flying in the wind.

“I have to go with my dad’s recipe. Tuna, some onions, and then a little bit of chicken on multigrain bread with mayo.”

Is anybody else running to make this now?

Dwayne Jean Jr. may be thankful for the switch away from Haynes because he had this to say when asked about who he doesn’t want on aux.

“I might have to go with Hainsey. He just would play some questionable music in the morning. Just not the way I want to start off the morning with some of the music he was playing.”

Oh, come on. You all knew this one was coming.

“Actually, I don’t use shampoo. I just use a conditioner. Coconut milk curls.”

“There’s a small place in Kennewick called Graze. Me and Deagan usually head over there. He gets a sexy time and I get a cobb salad and that’s how we refuel.”

For those wondering, I looked it up, and what McMillan orders is a panini with chicken, bacon, caramelized onions, thyme, chili flakes, brie, mayo, and provolone.