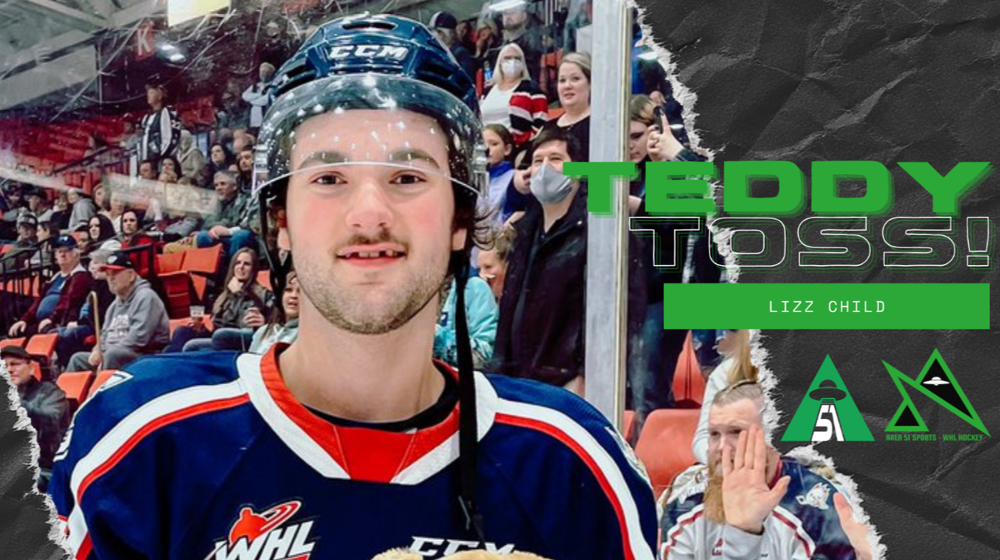 In case you haven’t noticed, it’s Teddy Bear Toss season! Otherwise known as the best time of the year, the bears have begun to rain down in junior hockey rinks across the league. With the first six toss games completed for the WHL, let’s take a quick look at how they all went down.

Man, the Spokane Chiefs gave fans a game to remember as they won 3-2 in overtime against the visiting Seattle Thunderbirds. Scoring the night’s first goal, Yannick Proske triggered the deluge of bears in Spokane Arena to the delight of fans and the team. With a final count of 5,175 bears collected, the Chiefs rounded out a successful Teddy Bear Toss game with a quick overtime victory.

WHL fans were probably prepared for the Everett Silvertips to come out and score something close to 15 goals during their Teddy Bear Toss game. With all the excitement for the always anticipated game mixed with the fact that they scored a total of 17 goals in their previous two games, their game was always going to be one to watch as the Vancouver Giants came to town. Matthew Ng was Everett’s Teddy Bear Toss hero, scoring just a minute and 54 seconds into the game. A crowd of just under 6,000 fans released their bears onto the ice. Currently, the Silvertips have not yet released the final count collected. While the team ultimately fell to the Giants 6-5 in only their second regulation loss of the season (the third would be the next night in Portland, but more on that in a different piece), it’s always a successful toss when the bears hit the ice.

A highlight of the game that you need to see:

The Tri-City Americans had the most dominant performance of the Western Conference teams that had a Teddy Bear Toss game on December 4th. With Alex Serraglio netting his first WHL goal, he set the release of 2,787 stuffed animals onto the ice in motion. PetSmart donated 1,000 stuffed animals earlier in the week for Tri-City’s Teddy Bear Toss. The fun didn’t stop there for the Ams as they went on to win the game 4-1 with goaltender Tomas Suchanek 38 of the 39 shots the Prince George Cougars sent his way. Look for the Ams to build on this positive win over a BC Division opponent.

The Kamloops Blazers are hosting their toss game on Friday, December 10th, when the Seattle Thunderbirds visit. The Vancouver Giants will host the Victoria Royals for their Teddy Bear Toss game that same night.

The Portland Winterhawks and Prince George Cougars are also hosting their Teddy Bear Toss games this weekend, both on Saturday, December 11th, against the Spokane Chiefs and Kamloops Blazers, respectively.

The Kelowna Rockets (December 18th), Victoria Royals (December 17th), and Seattle Thunderbirds (January 8th) will also be holding their toss games over the next few weeks of the season. If you can make it out to any of these games, DO IT!

WHL hockey is the best you’ll find, and Teddy Bear Toss games just make it that much more exciting. One bear or twenty, you’ll have the most fun of your entire season when tossing the fluff over the glass to celebrate the home team’s first goal of the night. Don’t miss out!