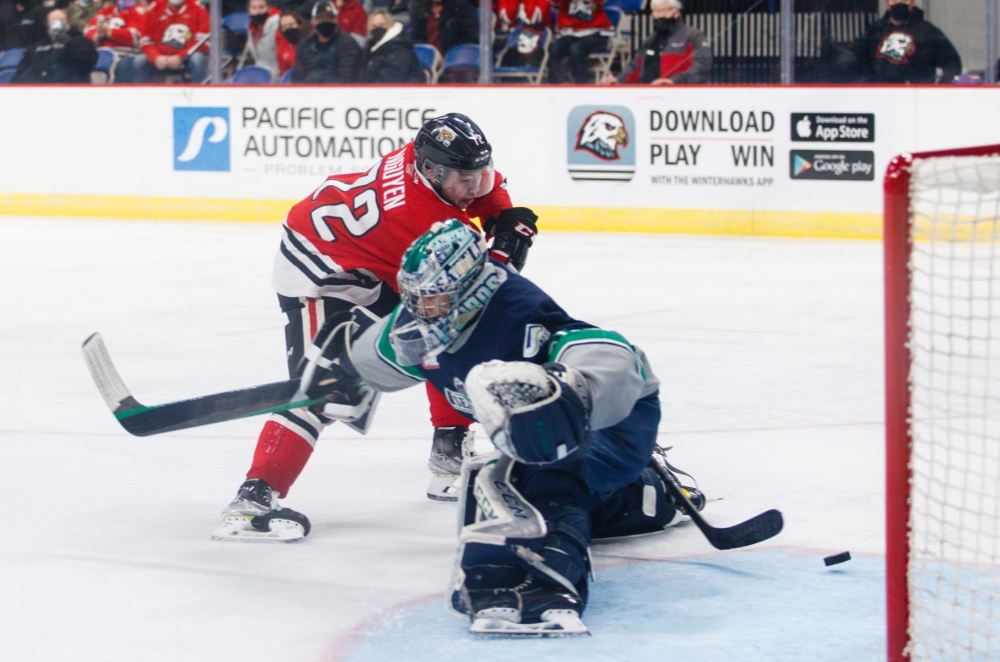 Playing their final game of 2021 and their first game of 2022 on back-to-back nights, the Winterhawks have worked to show what they are made of. Since returning from the holiday break, their three games have been played with a short roster. Heading into Saturday night’s game with only ten forwards, five defensemen, and one goaltender, the Winterhawks had their biggest test against an Everett Silvertips roster that added back three players from the World Junior Championship.

That being said, with Dante Giannuzzi in net for his third game in the last week – oh, and with no backup – the Winterhawks pulled off back-to-back wins against the Seattle Thunderbirds on New Year’s Eve and the Everett Silvertips on New Year’s Day. Everett and Seattle are sitting at first and second in the US Division, respectively, but the Winterhawks seem to have found their stride, going 8-1-1-0 over their last ten games. They have five days off before their next game, scheduled to be on the road in Kamloops against the Blazers with trips to the Kelowna Rockets and Vancouver Giants the following two nights.

Dante Giannuzzi – How could he not be on this list? He’s been giving dominant performances, and you can look for him to continue proving why he’s your starting goaltender in Portland. In four shootouts this season, Giannuzzi has only allowed goals in one of them. It happened to be the first game of the season.

Marcus Nguyen – Another Winterhawk having a fantastic stretch this season. Nguyen has been reliable every time he touches the ice and just seems to be getting better every game. Just what you want from your forwards, he’s been seemingly everywhere on the ice and doing great things. He’s a 2022 draft-eligible skater and is giving scouts something to look at for sure.

Ryder Thompson – Also eligible to go in the 2022 draft, Thompson has been having a quieter season than Nguyen, but the defenseman has been finding ways to do his job well. He silently catches your eye during games, and he’s one of the players you should keep your eye on the next time you see a Winterhawks game.

With the early return of Samuel Kňažko from the WJC, where he was representing Slovakia, the Thunderbirds are looking to maintain their position in the top two of the US Division. Going 8-2-0-0 in their ten games leading up to NYE, Seattle set itself up for success heading into the second half of the season. With and both an eight-game win streak and a five-game win streak, this team has worked to be one of the top teams in this league, and it’s been incredible to watch.

Samuel Kňažko – As previously mentioned, Kňažko is just back from the chaos that was the 2022 World Juniors (which never even saw 2022). Many Thunderbirds fans were anticipating joining the roster this season. He has impressed in his six games in a T-Birds sweater so far. Once he fully finds his footing in the WHL, he’s going to be a fan-favorite around the rink.

Mekai Sanders – Speaking of fan favorites around the rink, add him now if Mekai Sanders is not on your list. Aside from his name being found relatively consistently on the scoresheet, Sanders is simply a fun player to watch. Just watch him during the next T-Birds game (January 7th @ Tri-City) if you need more persuasion.

Jordan Gustafson – I don’t see enough people talking about this forward. He’s draft-eligible in 2022 and has 31 points in 28 games, and has been everywhere on the ice for Seattle this season. I think there is even another level to his game that we haven’t seen yet, but it’s close. Gustafson is only going to get better as the season progresses.

Hey, Silvertips fans! Don’t worry about your team! While yes, it was a rough period while Zellweger, Seely, and Gut were at the WJC… They’re back! In their first game of 2022, the Silvertips showed off some of their offensive prowess. They will continue to be a tough team to beat as we move through the season. However, it’s important to remember that this team is human. The insane start was fantastic, but now we are at the time of the season to see what everyone is made of, and the Silvertips will not disappoint.

Olen Zellweger – Fresh off his return from the WJC, Zellweger may just have something to prove. While Seely and Gut could also be in this spot, Zellweger was one to watch before he left and continues to draw eyes now that he’s back.

Koen MacInnes – Earning more and more starts in net for the Silvertips, MacInnes has been showing why he’s the next of the four-letter named goaltenders to come through the Everett system. He’s outstanding to watch and will only continue to improve as the team gets back on track.

The Tri-City Americans continue to be the team you want to root for. Their team seems to have everything except for the wins. However, they’re doing an incredible job keeping up even with a difficult period with goaltending the last few games. Their offense seems to have some big nights lately, so if they can keep it up, they’re going to be a team to watch in this second half of the season.

Parker Bell – If the Americans are scoring, there’s a good chance that it’s Parker Bell lighting the lamp. The Ams forward has 11 goals and 11 assists in his 28 games this season. He doesn’t look to be slowing down anytime soon. Fans won’t be disappointed in following Bell.

Nick Avakyan – If you haven’t seen Avakyan’s name all over Twitter in the last week, I don’t know where you’ve been. A goaltender who has been playing without a backup and had a moment where he would have appreciated one in a game against Portland on December 28th. He’s been holding down the fort for the Americans, and it’s going to be so much fun to see his career play out.

The Chiefs have had moments where they looked strong this season, and they have a roster that has all the ability in the world. They just need to find a way to put it together consistently. With the trade of Jack Finley to the Winnipeg ICE, the Chiefs have a bit of a different feel to them, and it’s going to be interesting to watch what they do to end the season.

Chase Bertholet – With ten points in nine games with the Chiefs, Bertholet has slotted in nicely with his new team following his trade from the Winnipeg ICE. He’s going to continue to impress, and it’s going to be fun to watch.

Graham Sward – The Chiefs defenseman has been having a great season and has somehow stepped it up over the last month. He’s been one of the most exciting players to watch, and that likely won’t end anytime soon.