Erik Atchison: From Vegas to Spokane 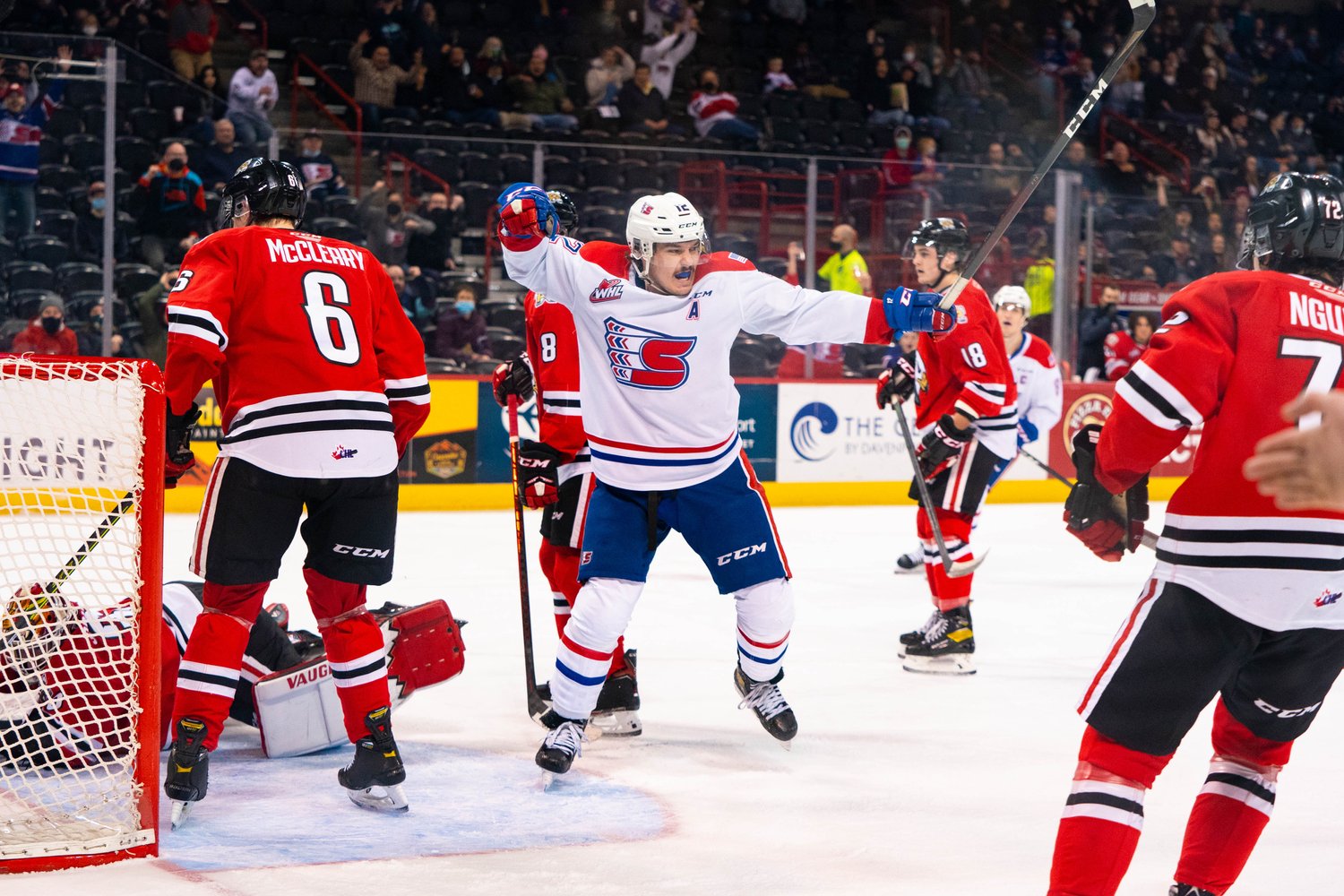 Erik Atchison played hockey in Las Vegas before playing hockey in Las Vegas was cool. Kind of. Hockey in Vegas has been around for years, but the Thunder folded three years before Atchison was born and the Wranglers ceased operations when he was 12. Luckily, Atchison’s father watched a certain NHL team and his son took notice.

“I started hockey because my dad was watching a [Pittsburgh] Penguins game one day. I was just sitting there watching. I looked at him and I just told him I want to do that. So then, he took me to the rink, I started skating, and now I’m here.”

Oh, and yes, he grew up a Penguins fan. Also, a Pittsburgh Steelers fan, but nobody will hold that against him. However, it’s just those two Pittsburgh teams that hold Atchison’s attention as he says he’s “not much of a baseball fan.”

As for where the Golden Knights rank in Atchison’s list of favorite NHL teams?

“Vegas is second, but Pittsburgh is still the best.”

Speaking of the best, Atchison says his favorite thing about Spokane is the weather.

“I like it. I love the heat. But I’d say the weather is pretty cool. Just to experience all the seasons. It’s not like it’s not too brutal, either. It’s not too cold.”

Another soon-to-be Vegas to the WHL story is Erik’s younger brother, Tyler. He might find his WHL city to be a bit more of an extreme change in weather. Drafted by the Edmonton Oil Kings in the second round of the 2021 WHL US Prospects Draft, Tyler has been playing in Chicago with the Windy City Storm 15U AAA team. Erik says he’s been trying to give his brother advice, but it hasn’t been the easiest task.

“I try to do the best I can because obviously, he’s away playing hockey too. So we don’t see each other as much but yeah, during the summer, like he’d skate with us and I just try to show things.”

However, the two may be able to face each other next season, so maybe it’s not the best idea to pass along all of the best skills just yet.

“I don’t know. I think he might be a little bit better than me, but we’ll see.”

Should the younger Atchison make his WHL debut next season and the league begin play between the conferences again, the brothers could take to the ice against each other in just a few months.

However, before that can happen, the Spokane Chiefs still have a bit to play this year. What has been the best part of the season for Atchison? Making the playoffs, a feat that the Chiefs accomplished in their final game of the regular season.

In the room, the guys were expectedly excited about extending their season.

“It was unreal,” says Atchison. “It was just so happy and [we were all] proud of each other. It was just so exciting. It was awesome.”

Once the excitement subsided, it was right back to work for the team as they prepared for a massive test in the playoffs.

“Obviously, [we knew] it’s not going to be easy,” Atchison noted of the first-round series against the Kamloops Blazers. “I think that was the mindset: we’ve got to be ready to play our best hockey. The hockey amplifies in playoffs and they’ve been one of the best teams all year, so [the message was] just to be ready and make sure we limit mistakes, I’d say.”

Heading into a do-or-die game four against the Blazers tonight, Atchison and the Chiefs know how they have to approach this game.

“We had a talk not too long ago about how our backs are against the wall but we need to keep it a little bit loose. Not too loose, but make sure we’re not you’re stiffened up and worrying about it too much. Just go out there and play, but also have fun.”

Atchison may be just the person the Chiefs need to stay in that sweet spot.

“I’d say bring good team energy,” he says of what he adds to the team. “I stay pretty loud out there on the bench and stuff.”

That isn’t all, though. Atchison also knows he brings a physicality to the game, along with the ability to drive the net. “I’d say it’s my thing.”

On the other hand, something he continuously wants to work on is his skating.

“I’ve never been the fastest player, that’s for sure,” notes Atchison of his innate ability. “But every year, that’s probably my favorite part. Just seeing where my speed is from where it was before.”

He says he has seen improvement every year, but he’s never satisfied with where he is at.

“It can always get better. For me, I’ve always had decent puck skills and stuff like that, but you can always work on skating.”

Because of not being the strongest skater, Atchison has been compared to some specific names, and has modeled his came after a couple of them.

“My whole life, my coaches usually said a guy like Corey Perry. He was one of the guys who was always said around me because wasn’t the fastest, but he’s smart. He could score and go to the front of the net.”

Atchison offered up his own suggestion as well:

“I’d say Patric Hörnqvist too, being a Penguins fan. He was always in front of the net, and that’s what I do on the powerplay and stuff. I’m in front.”

The message from this is that Atchison stays pretty lowkey on his day off.

“I’m not a huge sleeper, I’d say, but I’d wake up and probably grab some breakfast. I love video games. So there would probably be a lot of video games or something like that. Maybe hang out with some of the guys like in the hot tub and stuff like that.”

“Right now. It’s kind of all over the place. There’s kind of a rotation: Rocket League, Rainbow Six Siege, and stuff like that.”

Again, Atchison keeps it relaxed, even before a game.

“I’m not too superstitious, in terms of doing stuff at the same time. But, if I’ve eaten something, and it’s working, then I’ll do that. Usually, I’ll go for pregame skate. Then, I just usually eat around 1. [After that], I kind of just hang out, watch a movie or something like that, and just chill. Then, go to the game.”

Pregame nap: yes or no?

“Sometimes. It depends on how I’m playing. If I haven’t been playing so good, maybe I’ll nap for like 20 minutes but if I have been, I just won’t nap.”

Team pregame coffee, or not?

“No, never. I usually have too much energy as it is. I’m not a big coffee fan, though, in general.”

However, before a game, Atchison said he will have some pre-workout or something. Just not coffee.

If he could have any superpower, he’d pick:

While Atchison says he doesn’t have to take 215 that often back home in Vegas, he mentioned that flying would be convenient just to help get around when he’s in the area.

“Especially because Vegas is getting bigger and bigger.”

It hasn’t always been Atch though, he had a very different nickname when he was younger.

“I used to be called Little Crosby because I would skate with guys who were three or four years older than me because hockey wasn’t that big. I was pretty good, I’d say, and I was number 87. So they called me a little Crosby.”

How did Graham Sward get the nickname Dizzle? It’s still a mystery.

“I know that his Xbox name is *sorry, I won’t tell you*. I don’t know where he got it, but I think that’s probably why. I don’t know it must have been something he used when he was playing younger I don’t know.”

A moment later, Atchison thought about where else the nickname may have come from.

“It could be an Adam Beckman thing too. He would make up some funny nicknames for guys. I don’t know if he did it, but maybe.”

Of course, we had to talk pizza/sandwich perfection:

“My perfect pizza is barbecue chicken with some bacon and pineapple.”

Team pineapple may be winning at this point.

“For a sandwich, I’d say turkey, cheese, jalapenos, and maybe some chips on there too.”

It finally happened. The confidence flowed and somebody finally picked themself as having the best playlist. The reason behind his conviction is that he has a mix of a little bit of everything.

“It depends on the mood. If we’re just hanging out chilling, I’ll play country stuff. If it’s a game day, I have all that EDM. I just say I have a very wide range of music. I have all the pop stuff I have all the party music. I’ve got all of it.”

As for the worst DJ on the team?

“I’d say Saige Weinstein. We had a TikTok day and he was a popular answer.”

Saige Weinstein had the most votes by far. Timafey Kovgoreniya also voted for Atchison as having the best.

As for what Weinstein plays that is so bad, this is what Atchison had to say:

“It’s just like the new rap kind of stuff. I’m not a big fan of it. Older rap is good, but the new rap is just dumb.”

“AC/DC would definitely be number one. Just because it was my first concert and my dad always played that stuff.

Another all-time would probably be Motley Crue.”

“I just have to say, [we] appreciate them. Especially with all like the COVID stuff at the beginning of the year. It sucked for people who couldn’t come to the games and stuff, but they still supported us. Now that they’re able to [come to games easier] it’s even better, and I’m just saying be ready for Friday.”