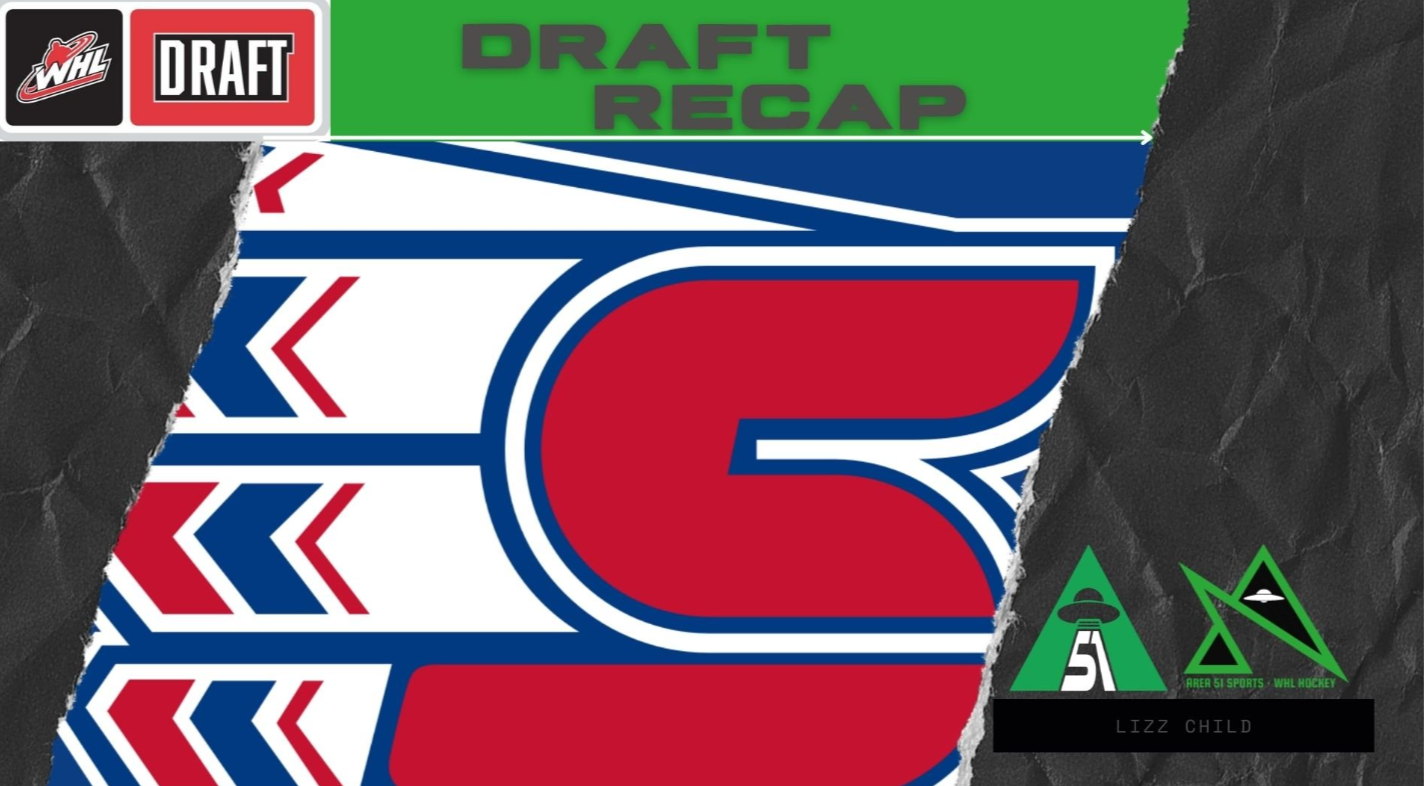 The Western Hockey League conducted two drafts just last week, with the US Priority Draft taking place on Wednesday and the Prospects Draft on Thursday. Between the two, the Spokane Chiefs added 15 prospects to the organization. Here’s how they look by the numbers.

In the US Priority Draft, the Chiefs selected forward Landon Hafele and goaltender Ryan Denes. The next day, they added seven more forwards, five defensemen, and another goaltender.

The first of the two US picks, Landon Hafele spent his season with Team Alaska. With the 14U AAA team, he picked up 10 goals and 10 assists in 15 games, while with the 13U AAA team he found six goals and three assists in six games. He also competed in the 2022 Chipotle-USA Hockey National Championships with the Green Bay Gamblers 14U team. In the tournament, Hafele picked up three goals and four assists in his five games in the tournament. Listed at 5-foot-10 and 163-pounds, the Chiefs scouting reports have called him “…a forward with dynamic skill and a high work ethic on and off the ice.”

Spokane also selected 6-foot tall, 165-pound goaltender Ryan Denes. In 35 games with one Mount St. Charles Academy 14U AAA, Denes posted a 2.40 GAA and a .910 SV%. In a different league with a Mount St. Charles Academy team, Denes appeared in eight games, finishing with a 2.85 GAA and a .911 SV%. Like Hafele, the netminder participated in the 2022 Chipotle-USA Hockey National Championships however, Denes attended with the Rhode Island Saints. In his three games, the 15-year-old posted a 3.33 GAA and a .839 SV%.

With the eighth overall pick in the WHL Prospects Draft, the Spokane Chiefs added 6-foot tall, 160-pound forward Chase Harrington. Most of Harrington’s season was spent with the Delta Hockey Academy U15 Prep Green team where he put up 32 goals and 18 assists in 29 games. The first-round selection also played with the Delta Hockey Academy U16 (6GP, 4G-3A) and U17 (2GP, 0G-2A)Prep teams as well. In playoffs with his U15 team, Harrington added 14 points through five games, and with the U15 group, he notched another six points in three games. The Chiefs scouting report praised his hockey IQ and believe that the combination of Harrington and 2021 first-overall pick Berkly Catton will be the offensive punch this team is hoping for.

In the second round, Spokane selected forward Owen Martin from the Eastman Selects U15 AAA program. In 32 regular-season games with the team, Martin potted 61 goals and 27 assists, while in playoffs he added another 10 goals and 11 assists in 10 games. While the Chiefs scouting report for him noted that he has a “goal scorere’s mentality,” it also included that he “skates well and does everything at top speed.” He should be an exciting player to watch develop in the future with the Chiefs.

With the 49th overall pick, 6-foot-1, 161-pound forward Hayden Paupanekis saw his name come up for the Chiefs. In 29 games for the Winnipeg Wild Red U15 AAA team, Paupanekis picked up 41 goals and 31 assists while also serving as the team’s captain. He also picked up another nine points in four playoff games for his U15 team. However, the 15-year-old also added another five points in seven games for the Winnipeg Wild U17 AAA team as well. The Spokane Chiefs have noted that Paupanekis has “excellent power forward qualities” and a “strong two-way hockey sense.”

With the 93rd pick, forward Trennan Redlick joined the list of Chiefs prospects after his season with the St. Albert Sabres U15 AAA. In 34 games, the 5-foot-11, 158-pound forward collected nine goals and 15 assists. Spokane will be looking for him to be a player with grit, should he join the club, stating that Redlick is “a hard-nosed player who likes to play a physical game,” and that he is “highly competitive and plays with character.”

In the sixth round, Finn Kallay was the next forward named by Spokane, being called a “strong two-way player with a good hockey sense at both ends.” The 5-foot-10 defenseman had 21 goals and 23 assists in 34 games with the St Albert Sabres U15 AAA team during the 2021-22 season.

The next forward, Ashton Beriana, came in the eighth round, from the Burnaby Winter Club U15 Prep team. Listed at 5-foot-8 and 132 pounds, Beriana picked up 14 goals and 23 assists through 28 games. Perhaps a smaller forward at the moment, the Chiefs say Beriana has “a good set of hands and passing skills,” as well as “strong offensive instincts and smarts.”

The final forward selected by the Chiefs was Delta Hockey Academy U15 Prep Green’s Dane Pyatt. Through 30 games, Pyatt collected 10 goals and 16 assists and impressed scouts with his work ethic, being called an “excellent skater with speed and agility who pursues the puck and body hard.”

With the 58th overall pick, the Spokane Chiefs selected defenseman Matthew Lesyk from the Saints Pro Hockey Academy U15 Prep team. The 5-foot-8 defenseman appeared in 36 games, picking up 21 goals and 19 assists along the way. The Chiefs see him as “capable of running a power play” and that could prove to be very important in the years to come should we see him on the Spokane roster.

Less than ten picks later, at 67th overall, the Chiefs added 5-foot-10, 150-pound defenseman Adam Boatter. With the Burnaby Winter Club U15 Prep team, Boatter collected three goals and 27 assists through 27 games. From what the Chiefs shared of their scouting of Boatter, it seems they believe he is a strong player overall, nothing that he “can be used in all situations.”

Four spots after that, Spokane picked up another defenseman in Owen Schoettler of the Northern Alberta Xtreme U15 Prep team. Described as a “smooth skater that plays both sides of the puck well”, Schoettler finished the season with six goals and 28 assists in 27 games. The Chiefs also noted that the 5-foot-9.5, 143-pound blueliner is “reliable and versatile on the ice.”

With the 96th pick, the Chiefs selected 5-foot-11, 159-pound defenseman Parker Seymour. In 34 games with the Fort Saskatchewan Rangers U15 AAA team, Seymour tallied three goals and 15 assists. Spokane’s scouting sees the blueliner as a “solid two-way defenseman that can play a heavy game.”

The last defenseman to be claimed by the Chiefs was Jack Bousquet of the Dallas Penguins AA 14 U program. While with the Penguins this season, Bousquet collected one goal and 11 assists in 21 games. Noted as “a good-sized, smooth-skating, puck-moving defenseman,” the Chiefs also believe he could run a power play.

The only goaltender taken by the Spokane Chiefs in the WHL Prospects Draft was Sam Saskiw of the Sherwood Park Flyers U15 AAA program. Picked in the ninth round, 178th overall, the 5′-foot-10, 142-pound netminder appeared in 21 games this season, finishing with a 3.50 GAA and a .891 SV%. Saskiw is noted to play a balanced game, being “technically efficient with lots of athleticism.”