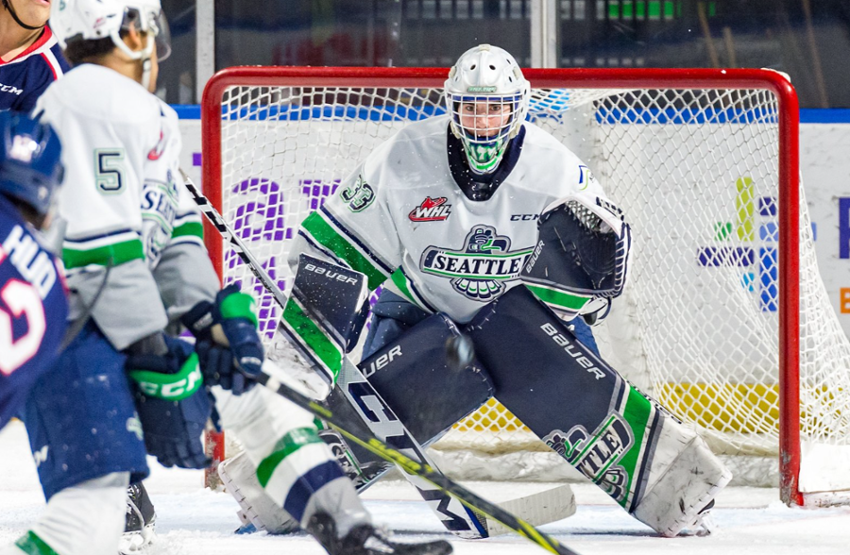 Goaltender Scott Ratzlaff hasn’t seen time in net for the Seattle Thunderbirds during the 2022 WHL Playoffs, however, he may be one reason his team has found success this postseason. He says he isn’t, but you can decide for yourself.

Scott Ratzlaff’s Path to the Playoffs

Coming into the 2021-22 season, Ratzlaff had appeared in just three games for the Thunderbirds, all coming during the shortened 2021 season. The Alberta native saw time in 22 games throughout the season, finishing with a 17-2-1-0 record and one shutout, coming in as relief for Thomas Milic on two occasions. The 17-year-old netminder said he has appreciated the experience to come to Seattle and soak it all in.

“It’s a great opportunity to come here at 16 and just learn the ropes and gain experience here for sure.”

The biggest takeaways from his time with the Seattle Thunderbirds so far? How much work it takes to stay competitive.

“[You] always have to be in the gym, working out and making sure that you’re ready to play at this level.”

How did he start playing hockey?

A few of you got it right on Twitter! Scott Ratzlaff didn’t actually want to be a hockey player at first.

“I used to want to be the zamboni driver.”

Per Ratzlaff, there was no specific reason for the desire.

It turns out, he hasn’t done an intermission zamboni ride before so, this is a formal request that someone makes this happen.

As far as the hockey goes, when his parents finally got him into a pair of skates, Ratzlaff commented:

“I didn’t like the ice at first, but it grew on me a little bit.”

Just a bit, now he plays the position that stays on the ice for the entire game most nights. How did that happen for a kid who didn’t really like the ice?

With his family also playing in goal, what was the best advice that he’s gotten from someone?

“I think just put in the effort. I mean, day in and day out, you’ve got to put the effort in and results will eventually come.”

That is the same advice he’d give himself if he could go back to the beginning of the season, adding on:

“You’ll get your chance and when you do, make the most of it.”

How Ratzlaff is Helping to Win Games from the Bench

First, he’s staying ready to play. While he hasn’t been called yet in the playoffs, Ratzlaff knows there’s always a possibility that he will be needed in net at some point, and he will be ready if it happens. How is he staying prepared? By doing everything exactly as he always has.

“I think just coming to the rink every day like I’m going to play. Just not changing my routine or anything like that. Even though I may not be starting, just have that mindset to get my routine going.”

That routine, according to Ratzlaff, is fairly normal, there’s nothing that stands out that others probably don’t do, and he says he doesn’t really have any superstitions.

“I get to the rink and I do a lot of hand eye coordination. Lots with racket balls, like juggling and throwing it against the wall. Lots of seeing things into my body and the hands to get warmed up.”

Ratzlaff went on to mention that being able to play at this level has helped him and that he’s looking forward to take his experience heading into next season as well. However, before he can actually think about next season, he and the Thunderbirds have a few more games to focus on.

Time and time again in these playoffs, the Seattle Thunderbirds have been counted out in whatever series they were in.

Many were expected the first round series with the Kelowna Rockets to go the distance and the winner to be whoever looked best in that game seven. Instead, the Thunderbirds took the series in five games.

Heading into the series with Portland, the Thunderbirds seemed to be the underdogs once again, going down in the series 3-1. However, the birds in blue wouldn’t accept another loss, coming back to win the series in seven games.

Again, in the Western Conference Championship series, the Thunderbirds were expected to easily fall to the Kamloops Blazers. Once again, the Seattle roster battled back from being down 3-2 in the series to claim the conference title and head to the WHL Final.

Even coming into this final best-of-seven series against the dominant Edmonton Oil Kings, the Thunderbirds have been said to have no chance. Well, that was until game one, where the Thunderbirds claimed a 2-1 victory in Edmonton and made everybody rethink their odds. Coming back to Kent with the series tied, the Seattle Thunderbirds have the opportunity to surge to a 3-1 series lead, but even if they drop one or both games, you can’t count out the Thunderbirds.

Per Ratzlaff, that’s basically the message the guys have been hearing in the room.

“The big message is to never quit. I mean, we’ve had a couple of games where we were facing elimination and just kept our head down and kept looking forward. So I think just keeping level headed, not getting too high, too low and just chasing that end dream.”

While he’s been on the bench for all 22 Thunderbirds playoff games this year, he’s taking in the experience and learning everything he can watching some of the older goaltenders.

“It’s huge. I mean, I get to learn a lot from seeing what they’re doing well. Take a piece of every bit of goaltending that you see it works, you see what works and integrate it into your own game.”

While Ratzlaff didn’t have any specific moments that he’s seen so far that he was willing to share, he did give some high praise to his goalie partner in Seattle:

“I mean, Millie [Thomas Milic] makes a ton. I watch Millie from the bench, and he makes some some pretty wonderful saves. I would give him a pat on the back, whenever he does something like that.”

Not only that, but Ratzlaff recognized the work ethic that Milic possesses:

“He’s really been putting in that work day in and day out, and I always come up to him and say, [that he] had a good game, no matter what happens, and just kind of keep it positive. Hopefully, that translates on into the next game.”

However, the netminder from Irma, Alberta doesn’t have the chance to chat with Milic much during games, so does he talk much to the skaters sitting next to him? Yes, yes he does.

“I like to talk to defense and forwards quite a bit.”

Sometimes, he’ll even let them know what he sees from opposing goaltenders.

“If something happens, I’ll say like hey, the guy maybe is cheating to this side or this might be open. Just trying to give them a view from what I see on the bench that they may not see on the ice kind of thing.”

If you’ve seen or taken part in conversations about how the Seattle Thunderbirds have been solving opposing goaltenders throughout the playoffs like we have at A51, Scott Ratzlaff might be the reason why. He’s just a little too modest to admit to it.

“I wouldn’t say that,” he laughed. “I just try to give them a tip here and there if I see something.”

There may have been a moment or two where he mentioned something to a skater, who then went out and scored a goal on their next shift, but Ratzlaff said he couldn’t remember many of those moments. Sureeee, Scott. It’s fine. The fans now know who really has been winning games for the Thunderbirds.

[I did tell Ratzlaff that this would be the narrative I was running with. So don’t take it too seriously. Or do. Whatever you want. -Lizz ]

Get to Know Scott Ratzlaff

Three teammates he would choose to be on his zombie apocalypse team:

“I think I gotta take Bausey [Tyrel Bauer] as one. Great Leader on and off the ice. I’m sure he’ll contribute in a zombie apocalypse. Second guy, probably [Lucas] Ciona. He’s another big guy that can defend the fort andhings like that. Then I probably have to take [Henrik] Rybinski. Because he’s just, you know, a light and funny guy and lighten the mood up as long as the apocalypse.”

“Oh, wow. I don’t know about forever, but a couple of months or years.”

It was decided that a week-long zombie apocalypse would be the best.

It looks like there’s a clear winner among the Seattle Thunderbirds for this one.

What is he playing that’s so bad?

“Just a lot of stuff that I’ve never heard before. I guess because he’s from Great Britain? He’s got a different music taste than me for sure.”

“Morgan Wallen, hes a good country artist. Zac Brown Band is another good one. Country’s probably probably one of my favorite genres and then I’d probably throw maybe a little bit Bruno Mars in there every once in a while.”

Back in December, the Thunderbirds posted a Birds Bios video with Scott Ratzlaff and he mentioned that he played the saxophone. How’d he start with that?

“Well, where I’m from, Irma, there’s a music program in school, and they just try and encourage the kids to play musical instruments. It’s a step back from all the schoolwork. I just chose saxophone and it just kind of clicked tonight and I enjoyed playing all the jazz music and things like that.”

“We played Enter Sandman as a band, and I really liked that one quite a bit.”

Message to the fans as the WHL Championship series comes home:

“Just be loud. It’s going to be a pretty some unreal game, so it’d be nice to have the support. Fill the barn and get it real loud.”