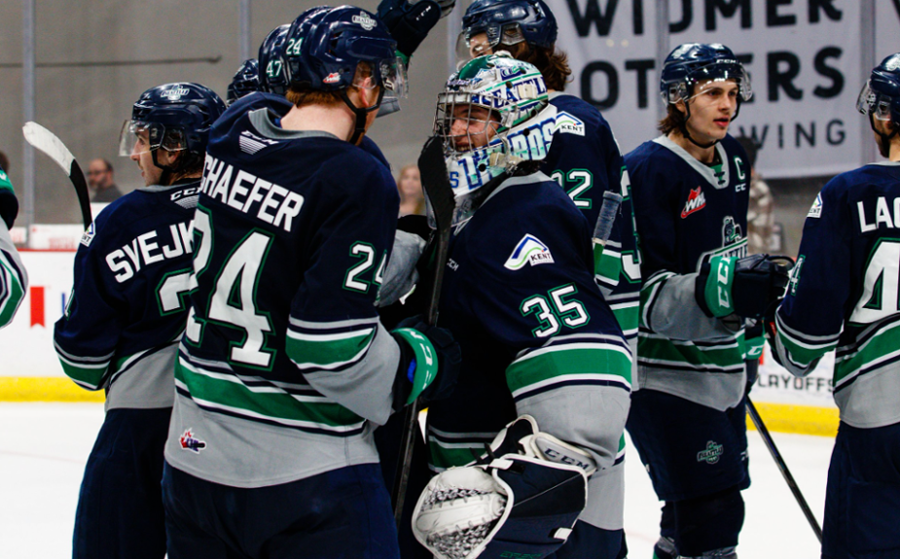 Well, we knew it was going to be a longer series, and here we are. The Portland Winterhawks hold a 3-2 series lead over the Seattle Thunderbirds heading into game six on Monday night. In a series that started in Kent due to a necessary 1-2-1-1-1-1 schedule, the home team has only won once so far (Winterhawks winning game two). With the series heading back to the accesso ShoWare Center, the Thunderbirds are going to have to change that narrative if they want to keep their run alive.

Where special teams led the way for the Winterhawks in game four, game five was entirely a story of goaltending.

Thomas Milic would make 32-of-33 saves en route to the Thunderbirds victory, while for the Winterhawks, Taylor Gauthier would find 34 saves on 36 shots.

As expected, both teams came out strong to start the game, and honestly neither side let up all night. However, for the fourth time in five games, the Thunderbirds opened the scoring as Henrik Rybinski picked up his third goal of the postseason 12:46 into the game. Seattle wouldn’t let up on the pressure following the goal, and while they wouldn’t light the lamp again for a while, they also didn’t make it easy for the Winterhawks to find their footing.

It would take just under 26 and a half minutes for fans at the VMC to see another goal from either team. Luckily for the home crowd, with 45 seconds remaining in the middle period, Robbie Fromm-Delorme would pick up his second of the playoffs to tie the game.

Unfortunately for that same home crowd, the next goal would come much sooner, and it would be found in the net behind Portland netminder Taylor Gauthier. Nico Myatovic would pick up the eventual game-winner just 2:02 into the third period. With plenty of game left to play, nobody would have been willing to call game at that point. A deep Portland roster, albeit without center Tyson Kozak, is never a team you can count out in a game, especially when only down by a goal. Enter Thomas Milic. Yes, he was in the game the entire time, but with a lead early in the third period, Seattle needed Milic to simply play his game. The Thunderbirds goaltender once again showed that he can keep up with anybody in the league, denying a number of quality Winterhawks chances.

Gauthier would head back to the Portland bench with just over a minute-and-a-half remaining in the game, and with just eight seconds remaining, Reid Shaefer found the empty net.

3-1 final and the Seattle Thunderbirds are taking the series home.

Scoring the lone goal for Portland, Fromm-Delorme had this to say when asked how frustrating this game was to lose, going on to mention what the team needs to do to prepare for Monday’s game:

“I think frustrating is not the right word to use. We lost, but in the end, it really doesn’t matter. It’s getting rid of that game and moving on to the next game, I think that’s the most important thing. We knew how they were going to come out, and obviously it seemed like they might have surprised us a little bit. That’s something that we’ve got to focus on for next game, because it’s do or die for them still. I think we’ve just got to be ready for that and I think we’ll be just fine.”

The Winterhawks finished the night 0/3 on the power play, while the Thunderbirds finished 0/4.

In Friday night’s tilt, four of the six goals scored came on the man advantage. Following Saturday night’s game five, Winterhawks general manager/vice president/head coach Mike Johnston had this to say about his team’s performance on the power play:

“Last night three went in. Tonight, we had some phenomenal chances, and they didn’t go in tonight. It was one of those nights where you get the looks and it just didn’t fall for us. The main thing is, does your power play give you momentum? How does the bench feel when you’re watching your power play out there? Are they working? Are they’re getting good chances. I thought for sure tonight, when we went on the power play we’re really confident out there.”

Johnston did go on to offer some positive words regarding Winterhawks defenseman Luca Cagnoni’s performance on Saturday night:

“I thought Luca was good for a young guy in a big pressure situation. You gotta remember a lot of our players have never had playoff experience, this type of emotion, this type of intensity. I thought he was excellent. When he has puck possession, you always feel that something good is going to happen when he has the puck, and that’s a nice feeling to have.”