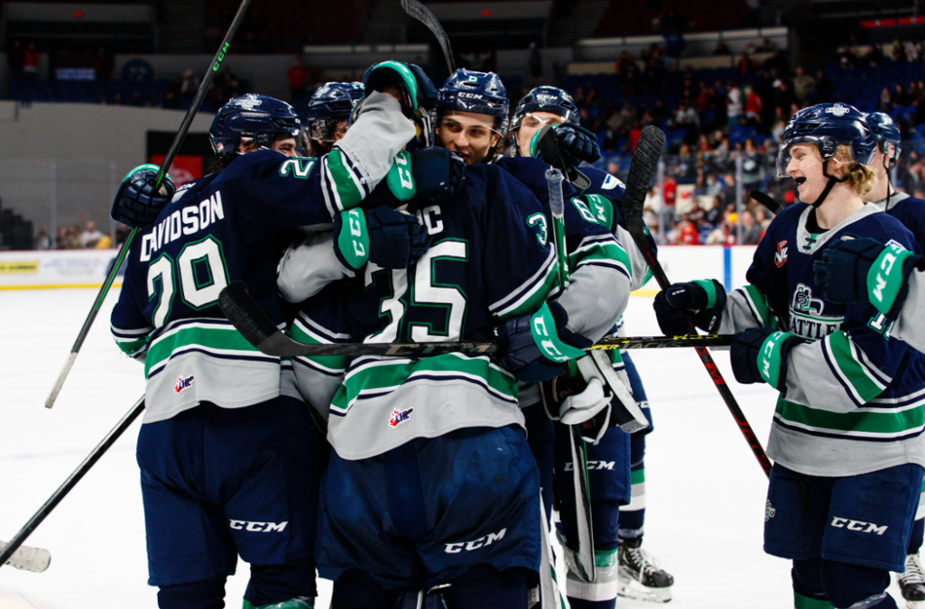 Wednesday night saw the Seattle Thunderbirds take some wind out of the sails of the Portland Winterhawks with a 5-0 victory in the Rose City.

Scoring 6:14 into the first period, Jared Davidson kicked things off for the Thunderbirds. Of the eight games Seattle has seen this postseason Davidson has opened the scoring in three of them and scored first for his team in four. Impressing all season, Davidson has had four multi-point games in the playoffs this year and has been held off the scoresheet only once. His goal would be the only one scored in the first period, and the game felt much like the previous two between these teams.

However, the Thunderbirds were determined for a different result and came out strong in the second period, keeping pressure on the Winterhawks. It didn’t take long for Lukas Svejkovsky to find the back of the net, giving Seattle a 2-0 lead just 5:29 into the middle frame. As expected, the Winterhawks refused to give up the fight, keeping this game within reach, but Thunderbirds goaltender Thomas Milic proved he was more capable of holding them off.

Into the third period, Portland was called for a too many men bench minor, and the Thunderbirds power play came out looking to find their first goal on the man advantage in this series. Oh, and they found it off of the stick of Conner Roulette, making it his first of the playoffs 7:29 into the final 20 minutes of this game. Roulette’s goal marked the first time this postseason that a team has scored more than twice on this Winterhawks team, and the Thunderbirds weren’t finished yet. Just over ten minutes later, with goaltender Taylor Gauthier on the Winterhawks bench, Davidson would pick up his second goal of the night on the empty net. With a 4-0 lead and just a couple of minutes left on the clock, there was not much the Winterhawks could do but try to stop the bleeding there. However, Lucas Ciona would have the final say, sneaking the puck behind Gauthier at the 17:37 mark, just 35 seconds after Davidson’s ENG.

With a 5-0 score, Thunderbirds netminder Thomas Milic would claim a 28-save shutout victory on the road, bringing this series back to the accesso ShoWare Center on Friday night.

Three Thunderbirds had a multi-point game in the win as Roulette picked up a goal and an assist, Davidson scored twice and had one assist, and Svejkovsky had one goal and three assists on the night.

The Portland Winterhawks still lead the series 2-1, but fans are already witnessing one of the most exciting playoff series this postseason has to offer. With game four at home, the Thunderbirds have the opportunity to tie things up at home and force a game six, where fans could see the team claim round two victory, but it starts with a win Friday night.

Puck drop in Kent is scheduled for 7:05 PDT. You can get game four tickets here.