Seattle Thunderbirds Claim Game One in the WHL Championship Series 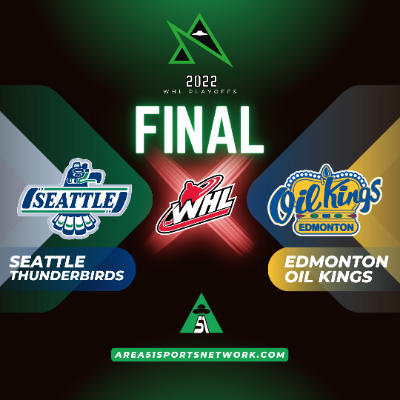 Ahead of Friday night’s game one of the WHL championship, Seattle Thunderbirds defenseman Kevin Korchinski commented that he and his teammates just had to play their game. That was his key to finding a victory in this championship series.

While both teams came out strong to kick off the final series in the WHL playoffs, the Edmonton Oil Kings took control in terms of scoring opportunities, outshooting the Thunderbirds 21-7 in the opening 20 minutes. Both Thomas Milic and Sebastian Cossa would stop every shot in the first period.

However, it wouldn’t take long into the middle frame for the Thunderbirds to take the lead as New York Rangers prospect Matthew Rempe would find the back of the net for the visiting team at the 1:59 mark. The goal would stand as the only one of the period, while the Thunderbirds saw the first power play of the game 18:17 into the second.

Early in the third, the Oil Kings would get their own chance on the man advantage with Lucas Ciona being called at the 2:03 mark. The Thunderbirds wouldn’t let the home team light the lamp on that chance though. It would take almost half of the third period for Seattle to find their first shot of the final 20, but when it came, Conner Roulette would deflect a Tyrel Bauer shot to put the Thunderbirds up by two. Roulette’s tally would come in 8:55 into the period, but just a minute and 25 seconds later, Sam Popowich would be called for boarding, giving the Oil Kings another shot on the power play. This time, they wouldn’t be stopped, and Carter Souch would put home a Luke Prokop shot with 8:20 left in the game. Though Edmonton would continue to fight to find a tying goal, Thomas Milic and the Thunderbirds would work their way to a win in the opening game of this best-of-seven series.

Following the game, Milic spoke to the media, commenting about how he handled the onslaught of shots that came his way.

“I’m someone who thrives with pressure, so being able to have those shots early to sort of get myself dialed in and really get into the game mentally and physically really helped me.”

Milic ended the night having made 43 saves on 44 Oil Kings shots. On the other end of the ice, Cossa finished having stopped 20 of the 22 pucks the Thunderbirds sent his way.

“I thought it was a gritty win. They’re a very, very good team. We came here and wanted to attack them, play hard. I think we grinded it out. It wasn’t the prettiest win but I think lots of guys stood out. I’m really proud of the group of guys and we got the job done.”

Many thought that the Thunderbirds wouldn’t be able to get much going against a dominant Oil Kings team, but great things happen when the guys in the room believe in each other as much as this Seattle roster does. Rempe put it best in the post-game:

“We aren’t going out without a fight”.”