Broccoli Guy and the Seattle Thunderbirds: A Match Made in Fun 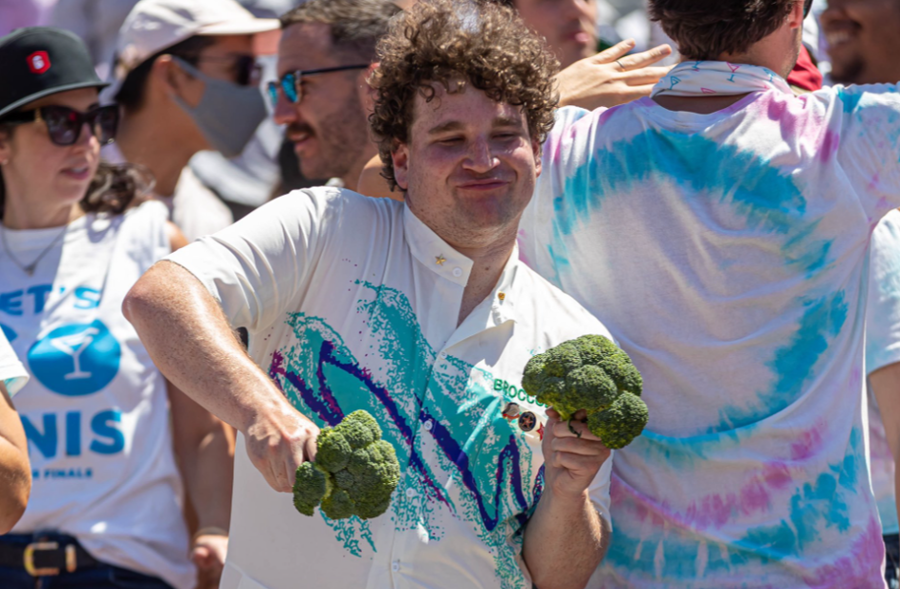 Broccoli is taking over sports in the Pacific Northwest. Actually, it’s not broccoli; it’s Broccoli Guy. If you haven’t already heard about him, Jim Stewart Allen is the man behind the broccoli, often in a SOLO paper cup outfit. He is a teacher in the PNW and probably one of the most positive people you could ever meet.

“In terms of boxing, I’m a volume puncher not a power puncher.”

That’s how the PNW Broccoli Guy describes his energy level throughout the various sporting events he attends.

“I go the whole game pretty much. I’m busy the entire time.”

If you’re wondering what that means, it’s because you’ve never seen him do his thing. Staying on your feet and dancing throughout entire sporting events is an impressive feat for anybody, but especially when you’re holding broccoli.

“I was expecting to get on the Jumbotron one or two times but oh man, that game was one of the most fun games of the year. I had no idea how it would play out but, I was getting tweets from the Thunderbirds and the Rockets saying things like, thank you so much for doing this. You know, that’s why I do it to make the games fun. So, it was really cool.”

It just so happened that the Broccoli Guy made his first WHL appearance with the Seattle Thunderbirds just as the Everett Silvertips were finding success with their own food-based star of their own in Taco Hat Guy.

“I still don’t know everything with the taco hat. I remember after the game, Everett getting on Twitter about it. I just remember seeing the rivalries deepened in ways that we would have never known could exist.”

While the taco hat attention has cooled a bit, broccoli is showing that it reigns supreme as Allen made his return to Kent on Friday night as the Spokane Chiefs came to town.

But with the attention he’s been getting, is it possible we’ll start seeing the Broccoli Guy at other arenas around the WHL?

“My sister lives in Victoria and I want to try to do some sort of Canadian tour. Especially since the Rockets were so nice to me.”

From that Rockets at Thunderbirds game, much discussion about broccoli started, but it all goes back to one post that started it all that night.

“Well, you know, the thing that started [the Twitter discussion] was the Kelowna play-by-play guy [Regan Bartel]. He took a video of me dancing, and then and then posted on Twitter. I saw that people started talking after that.”

Just what drives Allen and his broccoli to show up at games? It’s a fun experience for all involved, but what is he doing?

What was the reception like from the Thunderbirds organization that first night?

“I remember at one point the camera people in the scaffolding up at the top put me on the jumbotron for like 20 seconds, and I remember doing my thing. Then, after the camera went off of me, I pointed at them and with my broccoli and then they pointed back at me and gave me a thumbs up. This was before the game even started. So, I knew it was going to be great. Like, this is just a really good idea that I decided to come out, even on a school night when I was kind of tired. I had just decided that I’m going to come out to the Thunderbirds game because they’re not playing again for another 10 days and it was super cool that everyone supported me the way they did.”

The WHL is a developmental league for everybody, including Broccoli Guy. Just days after making his debut in Kent, Allen was off to Seattle to entertain fans of the Seattle Kraken at Climate Pledge Arena.

“When I got to a new stadium and a new sport, my goal is to exist, just to successfully exist,” Allen said of the opportunity.

Exist he did, and the Kraken noticed.

“I took a floret off my broccoli, held it up and then took a bite out of it – one of my signature moves – and they played that in slow motion three times in that game.”

How did he get started doing any of this? A question that he is asked regularly, and we’re all dying to know, right? It’s such a fun story to get to share. Spoiler alert, he started with potatoes!

He started all of this at the Famous Idaho Potato Bowl.

“That’s where the idea kind of came to fruition. I’ve been going to sporting events in the Pacific Northwest and elsewhere since I was a kid, and the Famous Idaho Potato Bowl is this weird college bowl game in December. It’s one of my favorite games, because it’s sponsored by potatoes, and I just think that’s adorable! I’ve been going to that game since 2014 and I would bring signs with me, just because it’s broadcast on ESPN. So, my goal was always to try to get on ESPN.”

Allen notes that the signs didn’t work that well for him, so in 2019, he decided to attend the game without them. Instead, he would wear his SOLO cup outfit and just dance at the game. However, he stopped to pick up an energy drink before making the eight-hour drive to Boise, and that’s when inspiration struck.

“I saw a whole display of potatoes and just thought wouldn’t that be amazing? If I brought two potatoes with me and danced with those? Then, as I was driving up, I said what if I also ate them when the cameras got on? So, I did all of that. They put me on the jumbotron, and they prominently featured me during that game.”

So much so that Allen had people recognizing him as he was walking back to his car after the game. He had so much fun that he decided to do it again the following year.

“So, I got really good at dancing. I started roller skating a lot and that got me much better at dancing and more coordinated with everything. I went back the next year on January 3, 2020, a lean mean dancing machine with my potatoes and nailed a SportsCenter appearance.”

When the XFL’s Seattle Dragons returned, Allen decided to get season tickets and do the same thing he had started at the Potato Bowl, but he chose to use a different vegetable this time.

“I decided on broccoli because broccoli is my favorite vegetable to eat, and it looks great. It looks like natural pom poms and when people see it far away, they go, is that a guy dancing with broccoli? At a sporting event? That’s different.”

He had no idea what the reaction would be, not even if the team or arena staff were going to be okay with his plan.

“You never know how that stuff is going to work, still even now you don’t. I’ve been on TV a bunch now which is cool, but at the end of the day, I’m a guy that’s bringing broccoli into a stadium and hoping for the best.”

To his delight, it all went well!

“People really liked it. The accounts all talked about it. The XFL even wrote an article about me, which was really cool.”

During this time, Allen attended a Thunderbirds game sans broccoli.

“I just had my outfit on, and I won this Zamboni dance competition without my broccoli. I remember telling the Thunderbirds on Twitter that I was coming and them saying we’ll look for you. I went, oh my gosh they know I exist.”

According to Allen, his broccoli buying has gotten to the point where his usual fruit stand’s owner recognizes him when he stops by and heads to the back to get the big crowns of broccoli before Allen has a chance to say anything. We hope this relationship continues to flourish; fans everywhere need it.

Because of the pandemic, appearances slowed down for Broccoli Guy, but he made his return at Seattle Seawolves rugby matches, eventually finding his way back to the Seattle Thunderbirds in December 2021.

“I just love it. I love supporting. I love supporting the Thunderbirds, I just thought it’d be fun to go back and see what happens since they were so nice to me last time and I went back and, I said this before, but it was literally one of the most fun nights of my year was just being in this this like kind of small arena with a bunch of other hockey fans.”

Who is Jim Stewart Allen?

He’s been working towards being a children’s entertainer his entire life but has found a different way to achieve his goal.

“I’ve been a teacher for a long time, an elementary school teacher substitute. I’ve always wanted to be like a kid show host for something like a PBS kids show. I didn’t quite know how that was going to happen. I didn’t mean for broccoli dancing to be it, but it just happened. I didn’t get into it to be a kid show host but it all kind of falls in line with who I am and what I’m about.”

His friends and family are all supportive of this adventure. Allen mentions that they are all proud that he is doing something genuine and making it marketable.

“That’s been really cool to see because some people ask what’s this character that you do? Explain the broccoli man/broccoli guy character and I explain it’s kind of a character but not really. It’s kind of who I am. In high school I got awards for being the most inspirational on my teams. I did cross country, swimming and track and I got most inspirational something like nine times out of ten. I was never good on any team, but I was always kind of there and motivating everyone so it’s cool to be able to get to do that again.”

One of the most touching moments for Allen took place at a Seattle Seawolves rugby game.

“I was standing at the second Seawolves game I was at since COVID began, and a player, Ben Cima, personally came up to me before the game and thanked me for the energy I brought. He said that players look at me to kind of hype themselves up during the game and that he did that.”

That was the moment Allen realized that what he was doing was not just enjoyable for the fans.

“Especially with the Thunderbirds, getting on the jumbotron, and kind of helping the vibe out from my seat was just a really cool feeling. It makes me so proud to get to do things like that.”