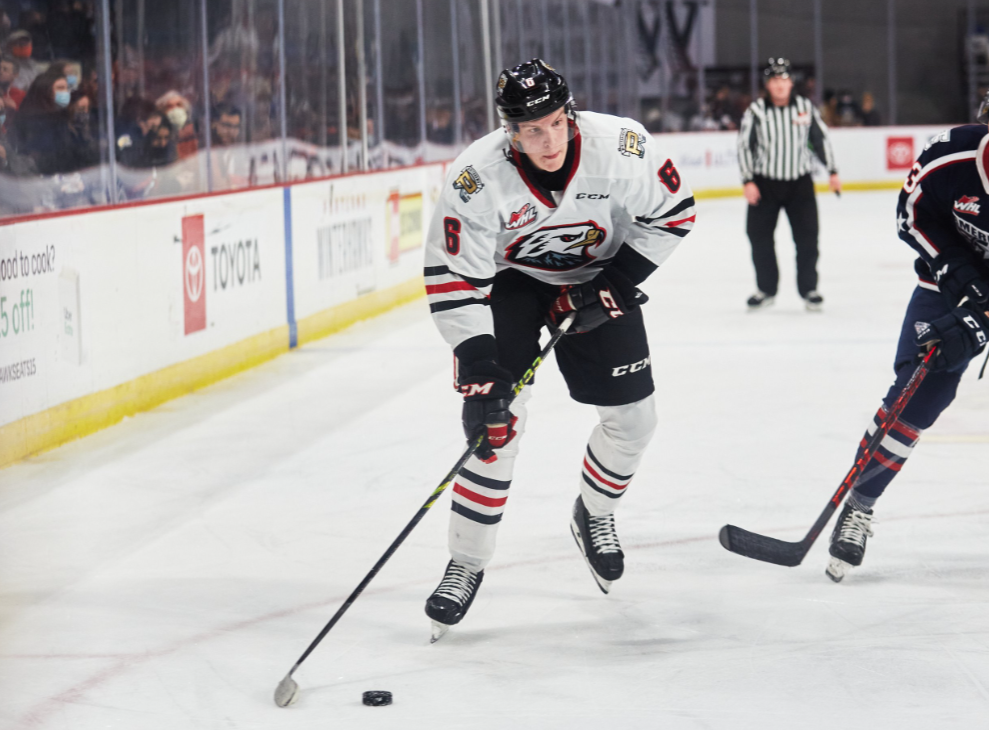 From working on his golf game to weekly trips to Calgary (for both training and family), Ryan McCleary kept busy during the off-season to get to where he is now. In a discussion earlier in the season, the blueliner affirmed that the summer had been good to him but that he was ready to get back to Portland and help the team excel. The defenseman made evident in our conversation his belief that this team could win the WHL this season.

In his sophomore season, the Swift Current, SK native spoke highly of his first season in Portland, though he recognized that it was such an unprecedented season. Of course, with his first season being just 24 games with constant testing and no fans, he only got a taste of what Portland has to offer. Coming into year two, McCleary was excited to see a bit of normalcy return to the league.

He began the 2020-21 season with the Yorkton Terriers of the SJHL due to the league starting quite a bit later than they had planned. Heading into his first season in Portland, McCleary felt like it was a nice test run of what it was like to move away from home and play in a bigger building. While it was a bit different from what he may have experienced in a typical first year in the WHL, it was something that he sees as ultimately having added to his development as a player. He credits the coaches and his billets in Yorkton for preparing him for his next step.

However, with the restrictions in the WHL last season, was it an opportunity for a bonding experience for the team? McCleary says yes.

“Yeah, I definitely think it was a good bonding experience. We all had to go through the same stuff. We all had to basically be quarantined when we came in and throughout the year not being able to see people outside of our team, so I think our team really had to come together. There were a lot of tough stretches where we just had practices and a tight schedule of games, and we really had to come together as a team. I think we did a good job of that.”

He also believes that sharing the experience will help the team moving forward. Having something that the core players share, he says it will be monumental in hopefully bringing a championship to Portland in the next couple of years.

Of course, heading into his sophomore year in the Rose City, he had some takeaways from his rookie season. Specifically, to just take everything one day at a time because with COVID, you never know if there will be a pause or a season shutdown.

“That was kind of right off the start. We never knew if we were gonna catch a case and be down for two weeks. So that kind of led us to just take it one practice at a time, one game at a time. It was just a good practice to get into just so you don’t look too far ahead or take advantage of the moment because you just stay in the moment and try to do the best at everything and what you’re doing.”

Being able to step back and focus just on what was going on in the moment was a valuable lesson that the 6’2 defenseman wants to keep with him moving forward.

This season, the Pittsburgh Penguins prospect came in just wanting to work on his individual development as a player.

“Just kind of get better in all the ways that I can. Improve my defensive zone to get better up ice.”

His skating has seemed smooth and effortless this season, and with 11 points in his 26 games this season, he’s been one to keep an eye on when he takes to the ice.

As far as his goals for the team this season?

“We’re a championship caliber team and I think we can go far and hopefully win a WHL Championship.”

After seven rounds of waiting to hear his name called in the draft, McCleary got to see his name on the screen next to the Pittsburgh Penguins logo. The best part? He was in the middle of sending a message of congratulations to his Winterhawks teammate, Tyson Kozak.

“Oh, when I found out it was kind of a weird situation because one of my teammates, Tyson Kozak, went the pick right before me so I was texting him as my name popped up on the screen and then my family saw before I did, and they were crazy happy for me. I think it was a very special moment for us.”

Continuing to play for the Winterhawks brings McCleary one step closer to playing for what he called his favorite team growing up.

Oh, and to the fans of the Pittsburgh Penguins, Ryan McCleary has a message for you:

“I’m the youngest guy in their system so it might take a couple years, but I’ll do whatever it takes to one day be in a Pens jersey.”