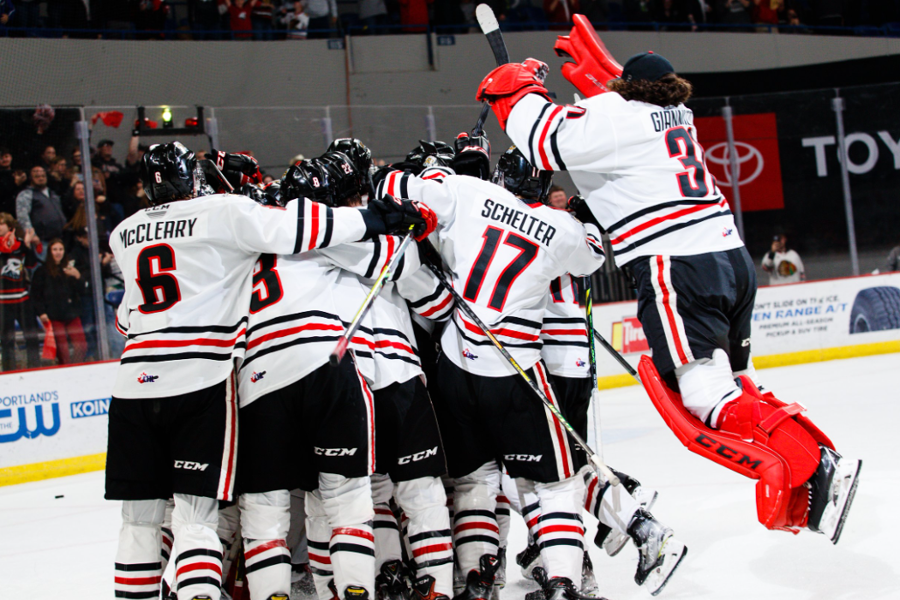 With many of their moms in attendance, the Portland Winterhawks continued their strong playoff run at home on Mother’s Day afternoon.

With the much-welcomed return of Jaydon Dureau to their lineup, the Winterhawks had an extra dose of confidence heading into Sunday’s game. However, the Seattle Thunderbirds were not going to concede an easy win to their division rivals and had a strong game of their own, keeping the Winterhawks on their toes for the entire 60 minutes.

The Thunderbirds opened the scoring, much like they did in Saturday night’s game one, with Lucas Ciona sneaking a puck behind Portland netminder Taylor Gauthier 9:05 into the game. Seattle would keep the Winterhawks off of the scoresheet for the remainder of the first period.

In another similar situation to the previous night’s game, the Winterhawks would find a way to tie the game around the middle of the second period. Tyson Kozak sent home a Robbie Fromm-Delorme rebound at the 11:02 mark, and the sent the energy flowing inside the Veteran’s Memorial Coliseum. Four minutes and 37 seconds later, on a Thunderbirds power play, Henrik Rybinski would be called for hooking on a Cross Hanas breakaway. Hanas was awarded a penalty shot and the opportunity to claim the lead for the Winterhawks, but was unable to convert as Thomas Milic came out of his net to take time and options away from the crafty Portland forward. The second period would end with both teams tied, just as they had the night before.

14:51 into the final frame, Josh Mori was called for a tripping penalty, giving the Thunderbirds their sixth power-play opportunity of the night. Having gone 0/3 on each previous opportunity, Seattle was hoping to claim a late lead on the man advantage to steal some energy from the Portland Winterhawks roster. However, it would be the Winterhawks to cash in, with Jaydon Dureau finding Gable Klassen shorthanded in front of the Thunderbirds net. While Klassen credited the resulting goal to Dureau’s work to stay with the puck, Dureau mentioned the effort it took from both of them to make the play happen:

“I saw Milic grab the puck, and I think [the Thunderbirds] felt that I was just going to pull back and he ended up playing it. They overall [were] just kind of sleeping around each other, so I was fortunate enough just to grab the puck and then Gabe’s heads up play coming back door. Sneaking in behind there and able to get the puck.”

Klassen noted that he was ready to pull back until he noticed Dureau was continuing to drive offensively.

The shorthanded tally would stand as the game-winner in the 2-1 Winterhawks victory.

Neither team was able to score on a power-play opportunity, with the Thunderbirds going 0/4 and the Winterhawks finishing the night 0/3 (and the missed penalty shot).

“For a young group back there, I was nervous, when you get in the second round, to see how they were going to respond. I thought that responded well so far.”

Of the seven defenseman on Johnston’s roster, only Clay Hanus and Kurtis Smythe were not considered rookies this season.

In net, both Thomas Milic and Taylor Gauthier continued to provide their teams with outstanding performances.

Milic, as he has throughout the playoffs, kept his team in the game, stopping 29 of the 31 shots that came his way Sunday night.

“Since we acquired him, he’s just been a brick wall.”

The two teams meet up again on Wednesday, April 11, back at the Veterans Memorial Coliseum as the series stays in Portland for game three. Puck drop for Wednesday’s game is scheduled for 7:00 PM PDT. You can listen to the game online or through the Winterhawks app. Watch the action on CHL TV.