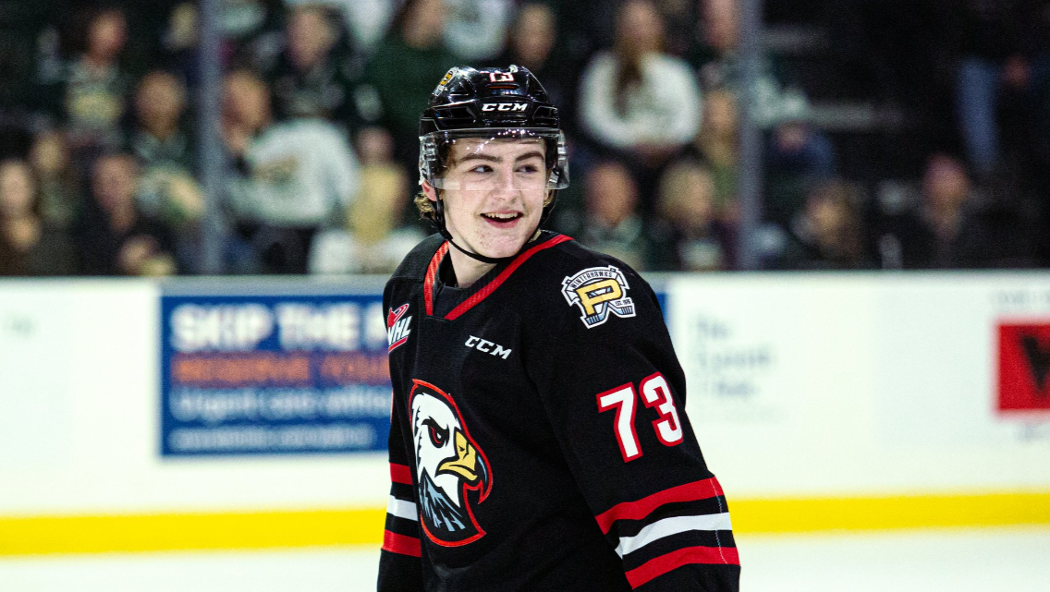 Having played just 10 games with the Portland Winterhawks during the shortened 2021 season, what he calls “a touch in the league”, defenseman Luca Cagnoni has spent his first full season in the WHL making people take note. With a late 2004 birthday, Cagnoni won’t be eligible for this summer’s NHL entry draft, but he will undoubtedly turn some heads leading into the summer of 2023.

Luca Cagnoni began skating around age three because his father put him and his sister into lessons at a local rink. However, the Portland Winterhawks defenseman wasn’t always so eager to be on the ice.

“I was always a little stubborn and I would just sit on the ice the whole time.”

That stubbornness only lasted so long though, as the 17-year-old says that one day he just decided to buy in:

“I was just like, ‘Dad, I want to go and I’m going to skate good’, and ever since then, I just had a stick in my hand. I always stuck with hockey after that.”

While Cagnoni said he can’t pinpoint a specific reason why he had the sudden change of heart, he does have suspicions as to why hockey became something he started to focus on:

“My dad used to play ball hockey, he was a goalie so that might have been why. I also used to play soccer when I grew up too, which just put you in the zone.”

With his dad being a ball hockey goaltender, was Luca ever tempted to put on the pads and spend some time in net himself? He laughed at the idea for a moment before responding with an easy:

Instead, Cagnoni says that he’s always played defense, even in youth hockey, he claims to have always played a more defensive game.

That being said, in his game today Cagnoni says that defense is where he most wants to work on improving, and that’s been his focus this season.

“I’ve really been working on having a good stick and obviously, on our team, there’s a lot of boxing out and stuff like that. I think I’ve been working pretty hard to get better at that.”

With the Winterhawks, he’s been doing well offensively from the blue line, and he says that it all started during his time in bantam hockey.

“I got that confidence that I had the skills to be more offensive.”

As for those skills, Cagnoni says he believes that two of his biggest strengths are his skating and his vision on the ice but added that his passing ability probably takes the top spot among his skills.

Though, with highlights like this, he clearly doesn’t need to pass to make an offensive impact on a game.

Though, when talking about who he models his game after, Cagnoni brought up a notable Vancouver Canucks defenseman:

NHL fans know that Hughes is certainly not a bad choice for the Burnaby, BC native to want to emulate.

As for the team, Cagnoni believes that overall, the Winterhawks have been doing well throughout the playoffs, but he knows there is still work to do.

“Seattle is a good team, so [the series is] far from over.I think we’re just going to keep on playing the way that Mike [Johnston] wants us to play. Just try to get the job done.”

As for how the Winterhawks are going to get the job done, Cagnoni says that so far, everyone has done well in their respective roles, and that’s what they will be trying to continue to do.

The rookie defenseman noted that his role throughout the year has been playing to the strengths he mentioned previously:

“I would say more on the offensive side. Getting shots on net, making good breakout passes, and trying to make good plays in the offensive zone to create scoring chances. I’m also on the power play to so, just trying to create something and get some momentum off that as well.”

The Winterhawks power play is currently ranked tenth-best throughout the postseason so far. Scoring just three times on 23 opportunities between the seven playoff games they’ve played, Portland’s power-play units are looking to improve their 13% success rate in the final games of the series against the Seattle Thunderbirds.

For the remainder of the playoffs, Cagnoni says the Winterhawk to watch is co-captain Tyson Kozak.

“He’s been working hard all year, and I think he kind of controls our whole team. He leads by example, is on the PK and power play, and I think he’s a good shut down forward, but still can create some good offense.”

Following the team’s shootout win over the Kelowna Rockets on November 19, Winterhawks head coach/vice president/general manager Mike Johnston had his own high praise for Kozak.

“I personally think Tyson Kozak is the best center in the league,” noted Johnston, who later added, “He can play head-to-head with anybody.”

GET TO KNOW LUCA CAGNONI

“I just got into it, but we go to the rink for pregame skate, if we need that, and then recovery. I usually come back home and I don’t eat until about 12 or 12:30, maybe one o’clock with a seven o’clock game. After I eat, I take a nap for about an hour, maybe a little bit more than an hour, and then I try to wake myself up, get ready to go to the rink, and then just play.”

In terms of trying to wake himself up, Cagnoni mentioned that he is not a coffee guy. He gets his energy up by just being around the guys.

“I’ll do thin crust, light on a tomato sauce. I would have spicy salami all over the pizza, black olives, onions, green peppers, and I think that’s it.”

Cagnoni commented that he would have ranch on the side, and when it comes to the idea of pineapple on pizza, he had a quick response.

If he could travel anywhere in the world, he’d go to:

“I’m Italian but I’ve never been to Italy so I think I’d go to Italy just because it seems pretty nice and they have pretty cheap pizza and stuff like that and the food just seems really good.”

What does he think people in Italy would think of his pizza build?

“I think it’s pretty solid. I think they would like it, honestly.”

(They might be more concerned about the ranch, but who knows.)

“James Stefan. He’s got some good music, or Clay Hanus. They both played pretty good country music and a little bit of rock at the same time.”

“I don’t know. I haven’t really heard everyone else’s.”

Apparently, he hasn’t heard anybody who has bad taste in music.

With that said, Cagnoni struggled a bit when asked about who his top-three artists are.

“I kind of only listen to Drake because I’m not really big into music.”

If he could choose his own goal song, it would be:

“Barbie Girl. I think it just funny. Even on like my peewee teams and stuff like that. That was the go-to song for games, so I think that’d be pretty funny.”

Is anybody else in full support of this at some point?