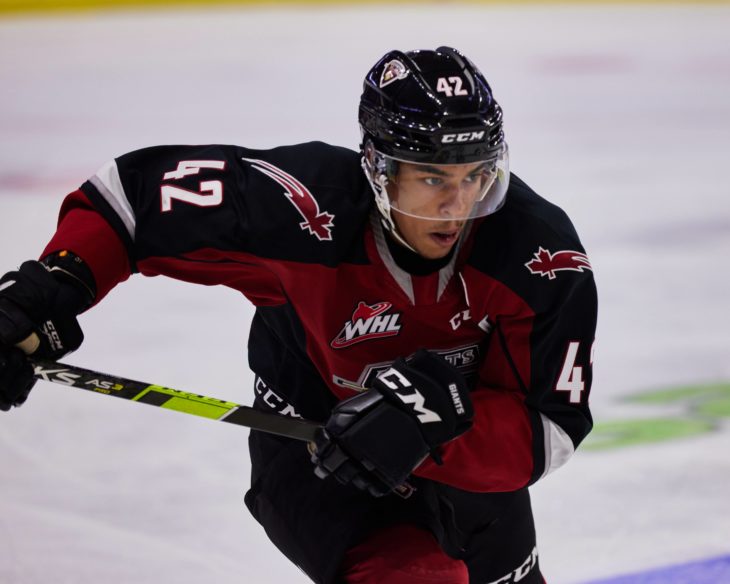 The Vancouver Giants had a busy trade deadline as they not only traded defenceman Tanner Brown, but also dealt captain and fan favourite Justin Sourdif. Both moves were surprising as Brown and Sourdif were staples on this team for the past few seasons. Now that the deadline is done, the Giants will have to get back to work without their leading point getter, and unsung hero from last season.

The day started with the Giants actually acquiring a defenceman from the Regina Pats in Tom Cadieux. The 19-year-old defenceman from Saskatoon has registered 11 points in 30 games this season. In return, the Giants sent over a 2023 third round pick and a 2022 fifth rounder. Cadieux should help fill in the spot left by Brown for the rest of the season. He does have some offensive upside but has mostly been used in a shutdown role.

The second move of the day was a little shocking as Brown was traded to the Winnipeg Ice for a 2022 first round pick. Brown has been with the Giants since the 2017-18 season playing 127 games with the franchise. He now joins a powerhouse Ice team that is gearing up for a run to the Memorial Cup, and should be a key shutdown force on the backend throughout their playoff run.

The big shock of the day however was the Sourdif trade. The Giants traded their captain to the powerhouse Edmonton Oil Kings for a 2022 first rounder, a 2025 first rounder and forward Jacob Boucher. Sourdif will join fellow World Junior teammates Jake Neighbours, Dylan Guenther, Sebastian Cossa and Kaiden Guhle as the Oil Kings are also poised to make a run to the Memorial Cup.

The player the Giants received from Edmonton, Jacob Boucher is a high skill forward that has shown he can score in the WHL. This season, the Alberta native has 10 goals and 10 assists in 30 games. He is categorized as a high skill player who should help Vancouver in the goal scoring department the rest of the season.

As for Sourdif, this trade was bittersweet for Giants fans. It is great to see him traded to a contender and get a shot at the Memorial Cup, but at the same time, he was the lifeblood of this Vancouver Giants team. The Surrey native was a delight to watch for the last five seasons and may even get a call to the Wall of Honour once his WHL career is over.

The big question is, where does this leave the Giants? They have stocked up well for this upcoming bantam draft, but now missing two of their top players will have a tough road ahead for the rest of the season. Do not be mistaken, there is still plenty of talent on this team, especially with the players brought in. Hopefully, the Giants can gel as a unit after this tough trade deadline and meet some of their old teammates in the WHL final.