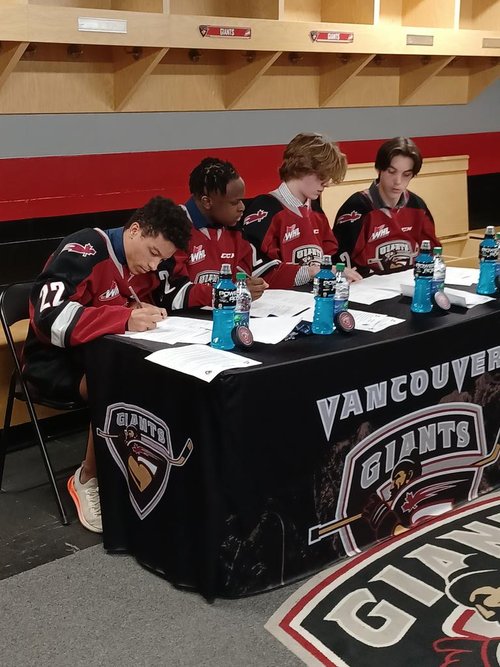 On Saturday, The Vancouver Giants announced the signing of four draft picks from the 2022 Prospects Drafts. First round picks Cameron Schmidt, Aaron Obobaifo, and Jakob Oreskovic along with third round pick Colton Alain joined the Giants organization.

Cameron Schmidt spent last season with the Rink Academy Kelowna U15 program. In 13 games, he recorded 25 goals and added 16 assists for 41 points, and added 38 penalty minutes. He also played three games with the U18 team, recording two goals.

“It’s an incredible honour to sign with the Vancouver Giants and to start this new chapter of my hockey career. I’m looking forward to meeting my new teammates and taking part in my first WHL Training Camp.”

Aaron Obobaifo played in 52 games with Shattuck St. Mary’s 14U AAA team where he recorded 44 goals and 47 assists for 91 points.

“It’s very exciting to sign today with the Vancouver Giants. A lot of great players have come through this organization and I can’t wait to get started. My family and I are grateful for the opportunity.”

“I’m very excited to sign with my hometown WHL team. I’ve grown up watching the Vancouver Giants play, and I’m honoured to have the opportunity to put on a Giants jersey and begin the next step of my hockey career.”