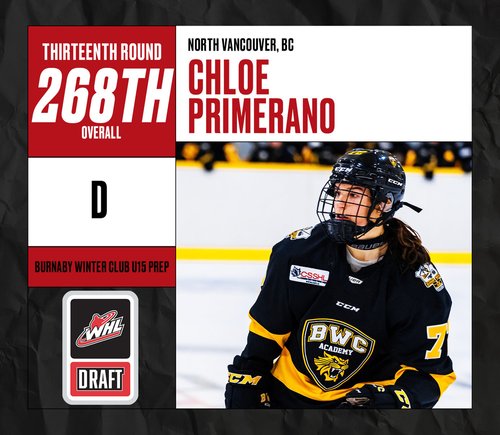 The Vancouver Giants made 11 selections including an historic one in the 2022 WHL Prospects Draft. In the 13th round, the Giants selected Chloe Primerano making her the first female ever selected in a CHL draft. Here is a breakdown of the selections.

At 7th overall, the Giants selected center Cameron Schmidt of the Rink Hockey Academy Kelowna U15P. This past year, he played at the U15, U16 and U18 levels. He is described as an dynamic offensive player that can change a game with his speed and shot. He scored at every level he played at while producing 41 points in 13 games at the U15 prep level. Aaron Obobaifo- 19th Overall

With the 19th selection, the Giants selected center Aaron Obobaifo of Shattuck St. Mary’s 14U AAA. Obobaifo is described as a dynamic two-way center that has an extremely high work ethic. This past season, he scored 44 goals and added 47 assists in 52 games at the 14U AAA level.

With their third first round selection, the Giants selected Jakob Oreskovic out of Delta Hockey Academy U15 Prep G 22nd overall. Oreskovic has a high skill set along with good size which drew the Giants eye. He put up 46 points in 28 games this season and saw time at the U-17 level as well.

With the 54th Overall selection, The Giants selected Colton Alain from the Pacific Coast Academy U15 Prep. This is the same organization that current Giants Ty Halaburda and Julian Cull were part of before coming to the WHL. The defenceman registered 32 points in 30 games at the U15 level and played some guys up a division at the U16 level.

In the sixth round, the Giants selected goaltender Burke Hood with the 119th overall pick. The 6’1” goaltender played in 14 games for the Rink Hockey Academy Winnipeg U15 posting nine wins and three shutouts. In two playoff games, he posted a .915% save percentage and a 1-1 record.

In the seventh round, the Giants selected Liam Magnuson out of St. George’s School U15 Prep. In 13 games with the U15 prep team, he scored twice and registered 13 points. He also played five games with the U17 team this past season.

With their ninth round selection, the Giants selected Simon Ward out of Burnaby Winter Club U15 Prep. Despite playing the entire season as a 14-year-old, Ward put up 33 points in 29 games at the U15 level. He also saw three games at the U16 level posting two points.

With their 10th round selection, the Giants selected Burnaby Winter Club U15 Prep’s Matson Waring. In 29 games, he scored two goals and registered 18 points. He also saw action at the U16 prep level playing three games.

In the 11th round, the Giants selected Sherwood Park Flyers U15 AAA’s Cade Bolding. The defenceman recording 17 points in 34 games. He also played two games at the U16 level this season.

In the 12th round, the Giants selected Markus Lam out of St. George’s School U15 Prep. The forward put up two goals and three points in three games.

In the 13th round, history was made as the Giants selected Chloe Primerano of Burnaby Winter Club U15 prep. With the selection, she became the first every female skater drafted into the CHL. In 30 games this season, she scored twice and registered 19 points. Below is some transcribed audio from of the Vancouver Giants:
Primerano on when she found out she was drafted:

”I was driving home from school with my mom in the car and I was just praying for it to happen. I was in shock honestly.”

Primerano on her past season and what type of player she is:

“I am a two-way defenceman that can go up in the rush and get in on the offensive zone. When it comes time to play shutdown, I can do that as well. It was a great year. We had a lot of great kids on our team and it was just a great environment. We had some great coaching and a great group of kids.”

Primerano on the goal for this summer: