Giants’ Lysell Heating Up at the Right Time 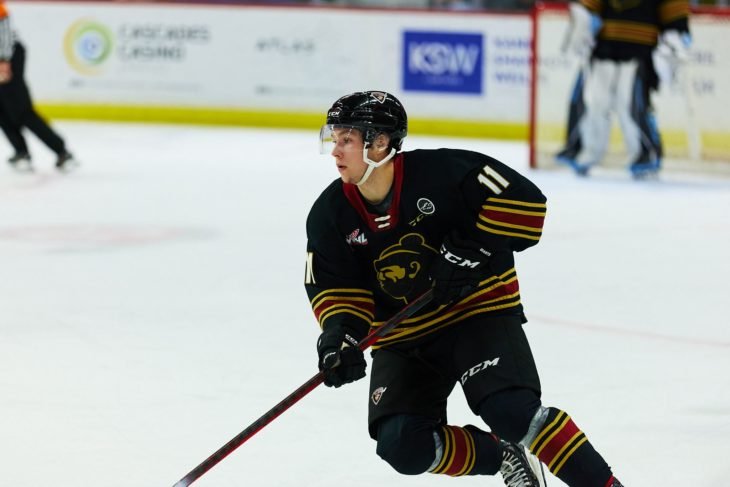 The Vancouver Giants finally found a way to beat the Kamloops Blazers in Kamloops on Saturday Night. The win was the first in five trips to Kamloops this season, and a big reason was the play of Fabian Lysell. The Boston Bruins first rounder is starting to heat up, and the timing could not be better as the Giants are entering the final third of the season.

Lysell has been dynamic all season, but his game against Kamloops may have been his best as a Giant. He scored twice including the overtime winner, had eight shots on goal and assisted Zack Ostapchuk’s 2-2 goal in the third period. He drove play and had the Blazer’s defence running around their own zone all night.

What makes Lysell special is his ability to get pucks on net. In his 32 games this season, he has only failed to record a shot on goal once. The shot less game came back in November versus Portland. Just because he wasn’t able to get a shot on goal doesn’t mean he wasn’t a key piece of the offence as he registered two assists in a 3-1 victory.

Over the last ten games, Lysell has really been ramping up the shots on goal. He has 37 shots during that time span and has registered at least four in five of the outings. The young Swede has shown up game after game lately and is currently riding a four game point streak going into a Family Day matchup with the Royals.

After Justin Sourdif was traded, more pressure was put onto Lysell to drive the offense. Since January 17th, Lysell has played nine games and registered ten points. He has scored a goal in all four of the Giants win during that stretch and has had multiple three point outings. It looks as though his game has improved given the extra responsibility which is a good thing for the Giants and the Bruins who seem to be pleased with his development.

As we get closer to the playoffs, expect to hear Lysell’s name more often. He is one of the most dynamic and skilled players in the BC Division and will be crucial as the Giants fight to avoid Kamloops or Everett in the first round of the playoffs. The road to the playoffs continues Monday Night with a matchup versus the Royals who Lysell has feasted on this season with eight points in six matchups this season. Dynamic players know how to take over games, and Lysell has an opportunity once again to show he can crown the Royals and put the rest of the league on notice.