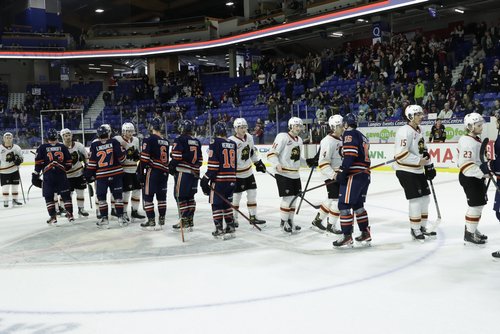 The Vancouver Giants historic run ended with a 6-0 defeat in Game 6 versus the Kamloops Blazers. Kamloops went two for five on the power play and scored a shorthanded goal in the win. Jesper Vikman made 30 saves while Dylan Garand stopped all 24 shots in the shutout.

Kamloops opened the scoring thanks to a Fraser Minten shorthanded goal early in the first. Luke Toporowski doubled the lead with his eighth of the playoffs midway through the first and took a 2-0 lead into the first intermission.

The Blazers added two more in the second off of goals from Daylan Kuefler and Logan Stankoven along with two more in the third from Toporowski and Caedan Bankier to close out the game 6-0. This was the first time the Giants have been shutout in the playoffs.

After the game, Giants coach Michael Dyck talked about how proud he was of his team. “I’m really proud of the way we played and we certainly restored a sense of pride in the organization”. The Kamloops Blazers now wait for the winner of the Portland Winterhawks versus Seattle Thunderbirds series to decide who plays for the Western Conference Finals. Portland leads that best of series 3-2.