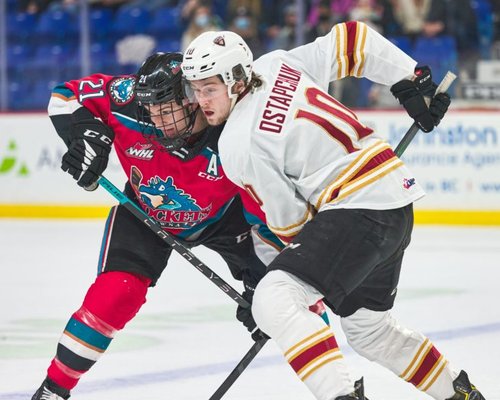 For the Vancouver Giants to make the postseason, the task is very simple. If they win one of their final two games of the regular season, they are in. If they lose both, then they must rely on results from around the league to determine if they will qualify.

If the Giants want to be successful, they need to cash in on the power play. Over the past five games, Vancouver has gone 2 for 18. Overall this season, they are ranked 18th in the WHL which is a key reason why they are in a playoff fight this late in the season. One major reason they have had issues on the power play is not enough shots on goal. It looks as though the team is trying to either find the perfect passing play or players take it on themselves to make everything happen which either leads to a cleared puck or shorthanded breakaway. Sometimes, going back to the basics is best. Get a shot through from the point and make sure there is a screen in front. They need to find a way to take advantage as it will go a big way in capturing a win.

Another key point will be how strong can the defense be in denying high danger chances. Everyone knows Kamloops and Kelowna are two of the most dangerous teams in the Western Conference so will Vancouver be able to keep the scoring chances to a minimum. A big reason Matthew Hutchison was able to get his first career WHL win against Kelowna on April 10th was because the Giants were able to control the Rockets entry into the zone and ensure their rookie goalie didn’t have to stand on his head the entire game. With Jesper Vikman projected to miss this weekend, it will be crucial that Vancouver finds a way to protect their goaltenders against two teams that have no issues getting pucks on net.

The last question that needs to be asked is who besides Zack Ostapchuk is going to step up offensively. He has five of the teams last nine goals and will be a focal point for the Blazers and Rockets this weekend. Some players that could step up include Ty Thorpe and Payton Mount who both will be looking to snap six game goalless streak. As for the defence, Mazden Leslie is one name to watch as he has continued to develop and looks ready to take the next step. Vancouver needs offence from those not on the first line if they want to qualify for the playoff. Now we just wait to see who can deliver in the biggest moment of the season.

The Giants have played well enough that they deserve to be in the playoffs. Regardless of what ends up happening, it is also crucial players like Leslie, Ethan Semeniuk, Justin Lies and Hutchison experience what a playoff atmosphere feels like. Hopefully by the end of the weekend, the focus will be on a playoff preview rather than a look back on the season.