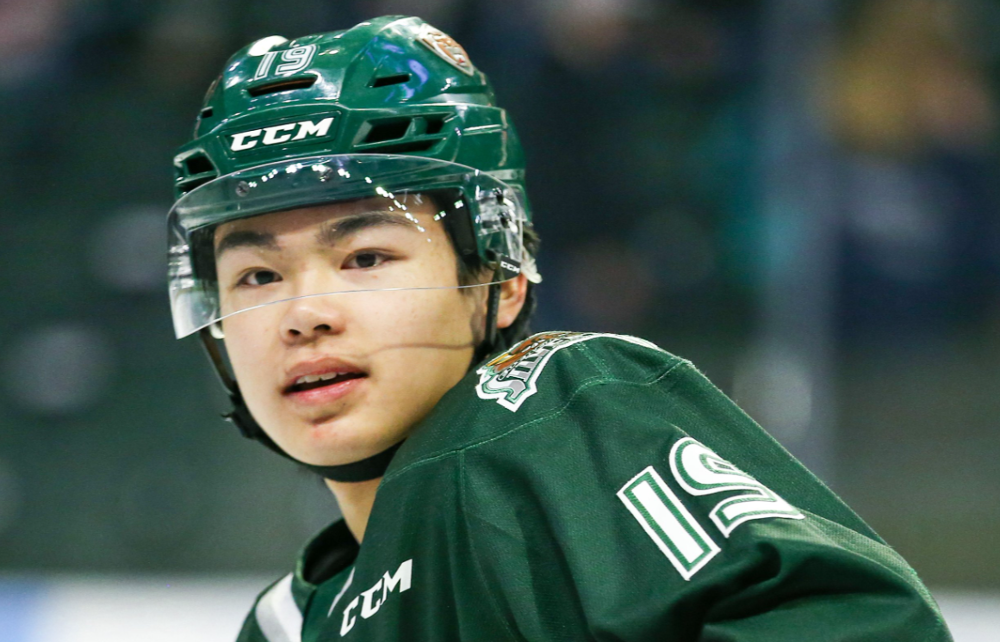 Throughout the season, fans watched as Everett Silvertips forward Matthew Ng grew into his role as a regular presence for a first-rate WHL team.

Ng’s hockey journey began heading to the rink because of figure skating lessons; however the lessons weren’t for him but for his older sister. According to Ng, he was too young to be left behind while his parents took his sister to the rink, and because he was there, he found himself putting on the skates as well.

“I think I was almost two years old when I first skated, and ever since then, I just stuck with it.”

Ng says that skating wasn’t something that he was forced into. He loved skating from early on, and he shared a fun story to show it:

“When I was younger, my dad wanted to leave the rink, and I was so mad that I wouldn’t take my gear off, so he just started walking to the car. I still had all of my gear on, skates and everything, but once I saw him start to leave, I chased him through the parking lot with my skates on. Sparks were flying everywhere.”

From a kid in California, running across a parking lot tearing up a pair of skate blades, to the high-powered Everett Silvertips roster.

In his exit interview, the Silvertips forward mentioned that the Teddy Bear Toss goal he scored in early December is “probably at the top” of his list of favorite memories of this season. A few days removed, and what he picked as his runner-up memory has more a team focus:

“I think, as a team, winning the US division and getting first place in the conference. That was a big accomplishment, not just for myself but also the team, and it shows how hard we worked collectively to get that done.”

While the Silvertips had a surprise ending to their season (do we really need to talk about it more?), those returning to Everett will undoubtedly be looking to somehow improve on the team’s overall performance in 2021-22.

“It was unfortunate how it ended. We wish we could have sent off our 20 year olds on a better note, but I think all of us are itching to get back at it next year.”

One of the first things you notice about Ng when you watch the Silvertips is that he is one of the smaller guys on the ice. Listed at 5’5, the 18-year-old knows where his strengths lie and how they relate to his size. So, just what are these strengths he sees for himself?

“I’d say my speed, I think that’s something that is important as a smaller player, and then my hockey IQ, shot, and hands.”

Heading into this summer, Ng is hoping to work on some things and return to Everett this fall, and fans may just see a new edge to his game in one particular area.

“I think the big thing for me, again, especially being smaller, is my strength and just being able to compete in those battles in the corner.”

Ng got his first taste of WHL action during the shortened 2021 season, seeing five games as an affiliate player for the Silvertips. Coming in for his first full season in Silvertips country, he heard some advice from teammates on what to expect.

“Guys would say to be ready for a high-pace, a lot of speed, and I think the biggest thing is just taking care of yourself away from the rink. On your off days, making sure you’re recovering well and ready to go again the next week.”

With a majority of games played on a Friday, Saturday, or Sunday, recovery has been a reccurring theme from players this season. Especially with the WHL throwing in a few three-in-three weekends for teams throughout the schedule, it’s something that both rookies and veterans have been keeping an eye on.

GET TO KNOW MATTHEW NG

“If it’s leading into a weekend, we’ll have a morning skate as a team that will be 30 minutes, have a couple of meetings, stretch out, and then head back home. Usually for lunch, I like to have maybe some chicken, rice, and some broccoli. Then, I’ll head up and take a nap for 30 to 45 minutes. I won’t eat my pre-game meal until right before I leave for the rink, which is different from a lot of guys, but I’ll eat around 4, and then head to the rink about three hours before puck drop. From there, just warming up, stretching out, and just making sure I’m ready to go mentally and physically.”

For those wondering, yes, Matthew Ng is on team pre-game coffee. His source of choice is a caramel macchiato.

Following a weekend of games, what does his recovery look like?

“Lots of fluids, good meals, obviously lots of sleep, stretching out, and then going out for a walk get some fresh air is important. Also, different recovery tools that we have like NormaTec boots or massage guns, anything like that.”

On that note, what does a perfect day off look like?

“Maybe sleep in a bit, not too late though, maybe 9:30 AM, and then get a good meal with some of the guys. Then, go golf. I think that’s a pretty solid day.”

Go-to place for a meal with the guys?

“We like to go to Vintage, that’s down the road from the rink, or a lot of guys go to K Fresh. Two really good restaurants.”

Best thing to order from either place?

“At Vintage, maybe all day breakfast. I think everything there is pretty good.”

Ng went on to describe K Fresh as being similar to Chipotle, just for Korean food. It seems like there would be a little bit of something for everyone.

Having just completed the drive back from Everett, WA to Cupertino, CA, how was the trip?

“Pretty long. Lots of rain. I was excited to get back to California and see the sun. Some good warm weather.”

[Basically, we need a major junior team in California, please.]

“I’d say most people don’t even know about it in the States, really.”

[That’s such an unfortunate reality. How about we change that for the upcoming season?]

While Ng says that there were really only two guys who controlled the music in the Silvertips’ room, he did cast a vote for one of them. Though, he mentioned that the music selections between the two are similar.

“I think Dylan Anderson is probably the best. He usually plays all our music. Although, there have been a few times I will say it was questionable before the games.”

The good news is that the change in music didn’t hurt the team’s winning ways throughout the season. They still won.

Okay, to be honest with everyone, Ng didn’t really cast a vote on this one. However, after being gently guided by how a teammate [Braden Holt, but he wasn’t told this] voted, he had this to say:

“Honestly, both Euros [Niko Huuhtanen and Michal Gut] have taken the aux a couple times, and none of us really understand what the songs are about. It kind of sounds like they’re just yelling, but it’s not they’re not too bad.”

As for number three, Ng gave two options, so he’s actually getting a number four as well. In no particular order they are Lil Baby and Gunna.

Why should people new to hockey come out to Silvertips games next season?

“I’d say just the environment. All of our fans that are already there are really dedicated. They have a lot of energy, and everyone that has come to the games that I know, have loved it. Almost guaranteed to have a good time.”

Why should people who have never watched a game give hockey a chance?

“I think hockey just a great sport that’s under appreciated by many. There’s not as much money they can use to market, but I think the sport is always growing in different places, even different countries. I think that if many of these people decided to give hockey try and watch it, they’d love it. It’s fast, really physical, and just entertaining to watch overall.”