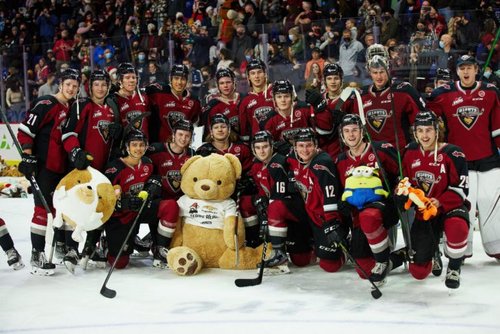 The Vancouver Giants finished their season falling in Game 6 of the second round to the Kamloops Blazers. The season was maybe the most bizzare in franchise history as despite a problematic regular season, the team found a way to come together and make playoff history. Here is a look back on the 2021-22 season.

The Giants were 6-3-1 with two shutouts to start the season. Jesper Vikman had two shutouts and was looking like the front runner for goaltender of the year while Fabian Lysell and Justin Sourdif looked like the dynamic duo everyone expected. Vancouver looked like a contender early which led them to trade future assets for defensemen Alex Cotton and Evan Toth to boost up their blueline.

Everything was clicking for this team which also led them to being named part of the CHL Top-10 rankings for Week 10. They also achieved a six game winning streak that lasted from November 24th to December 4th. Then the World Juniors came around and the tides started to change.

The Giants struggled during and after the World Juniors. The injuries started to pile up and that team could not put together any sort of momentum. Then at the trade deadline, Vancouver made the difficult decision to trade away Captain Justin Sourdif and defenceman Tanner Brown at the deadline. Although the Giants were not out of the playoff run, it was a signal that they were ready to start building for the future.

With injuries to players like Jesper Vikman, Ty Halaburda and almost every other player on the team, the Giants went on an eight game losing streak near the end of the season and finished eight in the West with a 24-39-5 record beating out Victoria for the final playoff spot by one point. Then, history was made.

Going up against the powerhouse Everett Silvertips, the Giants made history becoming the first ever eight seed to defeat and one seed in the WHL. It all started in Game 1 thanks to an unbelievable performance by Vikman in net combined with a five assist game from Lysell and a hat-trick by Adam Hall as the Giants defeated the Silvertips in overtime. Fans in the building were shocked beyond belief as the Giants celebrated on the ice.

Everett took Game’s 2 and 3 but the Giants never gave up and took the next three games. Every one of the Giants wins had a different storyline. In Game 4, they put up 11 goals including five in the third to tie the series. The in Game 5, Vikman had the game of his life with a 50 save shutout in Everett. A building in which the Silvertips were never shutout the entire season. Then, back home in Game 6, led by a five point night from Captain Zack Ostapchuk, the Giants took the series and claimed history. It was the loudest the Langley Event Center has been in a long time as over 3,300 packed the arena. Although it was a moment to celebrate, the Giants knew they had a bigger challenge waiting for them in the second round versus Kamloops.

All BC Second Round Battle

In the second round, the Giants faced off against the Kamloops Blazers. During the season, Kamloops had dominated the Giants and were looking to do it again. The Blazers took the first two games at home as many predicted but not in the fashion many thought. Both games were extremely close with the Blazers only winning by two goals in game one and one in game two. This opened the door for the Giants in Game 3 as they used the momentum to pull off the 3-2 victory. Then controversy hit in Game four and five.

In game four, the Giants were called for too many men on the ice. with under two minutes to go trailing one. This resulted in Kamloops getting a late power play and burring the puck into the empty net for the 4-2 game. The Giants were furious as with under a minute left and still pushing for the tying goal, Ostapchuk was tripped with no call. The fans and bench were furious as the missed called did have an impact on the game. Then in Game 5, the opposite happened. The Blazers, who were down one with just over two minutes remaining took a too many men on the ice call which led to the Giants scoring twice into the empty net and keeping their season alive. Unfortunately, injuries just continued to pile up with players like Colton Langkow and Mazden Leslie missing games in the series and the Blazers were able to take advantage with a 6-0 victory in Game 6 to win the series. The Giants just ran out of steam and it unfortunately ended their season.

Overall this was a fun season full of memories for not just the players but fans. Here are some testimonials:

The Giants showed the ability to battle back from adversary throughout the year which should bode well for the young players on this team. Ostapchuk looks to have taken his game to another level while younger player like Jaden Lipinski, Colton Langkow, Halaburda, Ethan Semeniuk and Leslie all improved as the season went on.

Then there were the 20-year old’s. Alex Cotton was huge on the scoresheet during the playoffs, Adam Hall delivered with some big time goals and Connor Horning was everything this team needed on the backend and so much more. Thank you for all your time in the WHL and we hope you have successful careers in the future.

As for the future, there is also some excitement around their WHL Prospect Draft as the Giants drafted some highly skilled players with their 11 picks. The Giants should be an exciting team heading into next year that can hopefully build off the 2021-22 season and make the 2022-23 season a special one.